With 5 Lions Dance, Pragmatic Play returns to one of their favoured themes, Asian, in a slot brimming with lions and other motifs from the genre, but also a more subdued affair on all fronts. Played over 5 reels with 1,024 ways to win, 5 Lions Dance is set in a Chinese village in what looks like the middle of a festival. The reels sit on top of one of those traditionally tiled roofs, surrounded by the type of buildings common in these types of games. It must be a shock for people whose only taste of Asian culture is through slots to visit in person to discover towering steel and glass skyscrapers. A plinky guzheng soundtrack comes as no surprise, but fits the slot like a charm.

Players can fire up 5 Lions Dance on any device by selecting bets from 20 p/c to £/€100 per spin. Pragmatic has toned down the math model and advertised a more modest potential compared to what they usually post. On opening the paytable, players are alerted to a medium volatility, as well as a solid default RTP rating of 96.5% - although this number can be significantly lower depending on where you play. During testing at least, despite periods of low/no wins, 5 Lions Dance proved to be one of those games that tend to return to the original balance, given enough time.

To win, Pragmatic Play decided not to use fixed paylines but went with a 1,024 pay ways system instead. Winning combinations of three to five of a kind are possible, from the first reel onwards in any row. This system not makes 5 Lions Dances flow better, but complements the symbol transformation feature covered below.

Symbols are divided into two types – low pay royals, and high pay lion heads. There are five different coloured lion heads, paying out 4 to 20 times the stake for combinations of five of a kind. Lastly, the golden ball symbol is wild, landing on all reels to substitute for anything except the bonus scatters symbols.

5 Lions Dance centers around its two features – the Lion Reel bonus and free spins. The first is activated when 3 or more Lion Reels symbols land on the same spin. When this happens, the first two reels merge into a Lion Reel. This special reel displays multipliers of 5x, 10x, 15x, 20x, 25x, 50x, 75x, 100x, 150x or 200x. The reel spins once, so whatever value it stops on is applied to the total bet and paid.

The second feature is a batch of 10 free spins, awarded when 3 drum scatter symbols are present on reels 1, 3, and 5. On each free spin, wins are calculated first, then, if it would make a win, all lion head symbols on the reels are transformed into the same matching lion symbol for an extra payout. This feature is often responsible for some of the best hits in the game. Scatter symbols remain part of the feature too, so three in view retrigger 10 free spins. There is no set limit to how many times this may occur.

At first glance it is easy to dismiss 5 Lions Dance as a lightweight, generic, Asian themed slot. One of those games that doesn’t make much of a ripple on release, or is forgotten about within a week or so. In some ways this is an apt summation. However, it's actually not a bad game in certain situations. 5 Lions Dance is not an all or nothing thrill ride, or one you play in the hope of achieving everlasting glory. It's a lot more toned down, which might appeal to players who don't want to leave everything on the table.

Its positive factors include a math model possessing a high inertia. After testing, the balance was pretty much right back where it had started from, while during play, it seesawed back and forward like a yo-yo, around the entry point. A lengthy bout of dead/low-value spins would all of a sudden be balanced out by a win of around 100x or more – helped by the pay system.

When it came to triggering free spins, 5 Lions was all over the place. Sometimes they’d activate in a reasonable amount of time, yet once it took over 1,100 base game spins to hit. True to form, free spins appeared just enough, to typically bring the balance back to baseline again.

As to the gameplay, it is the 1,024 win ways that saves 5 Lions Dance from being a total write off. It helps prevent the base game slipping into total snore-fest, and works well with the transforming symbol feature in the bonus round. If transforming symbols had been combined with say 20 paylines, it would be much harder to link up wins, and tougher to enjoy. By using the 1,024 win ways, this feature is much more potent, occasionally knocking together a decent win. Overall potential isn't huge, but 2,700 times the stake feels pretty reasonable for this type of game/math model.

For players after a gentler slot where you play to break even or those who need a time out from the savage, Darwinian survival of the fittest struggles found in Asian themed games like Jin Chan's Pond of Riches, 5 Lions Dance could be alright. It's not a slot that has a much of a pull once you're done playing, but it might make a suitable palate cleanser between bigger games.

5 Lions Dance isn’t exactly new or exciting; nonetheless, its pay system/feature combination and friendlier math model make it an ok slot to try if you’re into the theme. 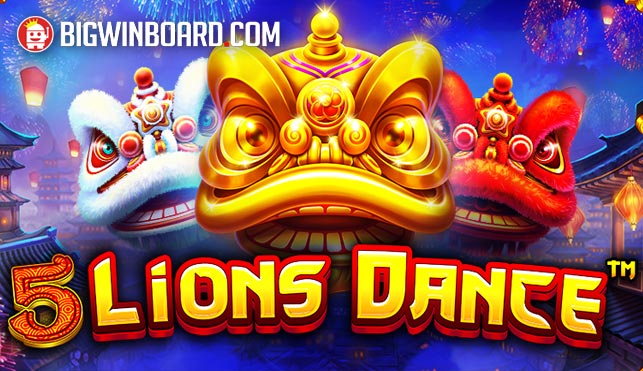