Microgaming partners Triple Edge Studio are back to lead players on safari with their wildlife-themed slot African Quest. It’s never made quite clear exactly what the quest is, perhaps travelling to Africa is a quest in itself? Whatever the reason, expect a game full of iconic big animals from the landscape, with the lion at the top of the game’s food chain. There are a ton of African wildlife slots out there, so it takes something special to capture the attention of a jaded slots public. Has African Quest got the goods?

The initial visual impact fails to dazzle. The graphic standard is fine; it’s just that African Quest looks like about a dozen other games. The background is a tree-lined savannah with that sunrise, or sunset, glow to it that you have no doubt seen before. Even the expression on Kubwa the Lion (yes, he has a name) looks familiar. The 5x4 grid is simple but functional, and the UI has the classic Triple Edge/Microgaming layout. Default bet level is 1 credit per spin, but players can lower that to 10 p/c or raise it to £/€15 a pop.

African Quest is a bit of a departure from the 5x3, 10 paylines slots that Triple Edge typically turns out. This time round they have fleshed out the game engine with an additional row and increased win ways to 1,024. After a short hiatus, Hyperspins are also back. These have been seen in Book of Oz and Break da Bank Again in the past and are similar to the extra gamble features that pop up occasionally. Instead of choosing the colour or suit of a face-down card, the options are even simpler. At the end of each base game spin, players have the option of re-spinning a reel as many times as they like in the hope of landing a desired symbol to create a combination. There is a cost involved of course, and the amount depends on how lucrative any potential combinations on the reels would be.

Hit the menu button on the bottom left to open up the paytable to see what the game offers. There are 10 base game symbols in total. The 9 – A royals have an African-ish styling to them, and five animal icons. Interestingly, not the famous Big 5 animals, but zebras, giraffes, rhinos, elephants, and of course the lion. As you’d expect, Kubwa is worth the most at 7.5 times the stake and he can land in stacks of two or three. On the whole, symbol values are relatively low, so you will need the game’s multipliers to work their magic for best returns.

Working behind the scenes, African Quest’s RTP sits at 96.02%, or 96.52% when respins are factored in. The game also has a very high volatility which is combined with decent potential. That setting also matches the temperament of Kubwa’s species. The guy looks pretty placid on the load screen but again, thanks to some high-value multipliers the game can string some pretty substantial wins together.

African Quest comes with several features that will need to be employed to push it to its limit. The most common is the wild symbol which depicts a sun rising on the plain. Or is it setting? It is impossible to tell. Either way, it appears on reels 2, 3, and 4 to substitute for any regular pay symbol.

The scatter is a map of Africa and pays out when 3, 4, or 5 land in any position. As you would expect they also trigger Free Spins which come in three forms depending on how you want to play it:

When a winning combination lands with a wild it applies one of the Multipliers mentioned above. Get more than one wild involved and the numbers are multiplied together. So at most, up x64 is possible on a spin. Scatters still pop up during free spins, and two or more will add additional spins to the remaining total.

African Quest is far from being an original slot, but it does enough to make it an entertaining option. Obviously it will have greater appeal to fans of the Hyperspins concept. The jury’s still out on Hyperspins. It’s kind of tempting but after getting burned a few times the novelty can wear off. Still, it adds an extra dimension to the game that will suit some players more than others. It’s also more interesting than choosing a card’s suit or colour.

When it comes to potential, African Quest can’t match the numbers put up by the big wilderness slots. Examples such as Raging Rhino Megaways or Safari Gold Megaways spring to mind, but it holds its own with a respectable 5,000 times the stake. To have a chance of hitting that amount, you are better off being ballsy with the low number, high volatile free spins option. It’s the way of getting maximum multipliers to load up in conjunction with Kubwa - preferably stacked. Overall, African Quest is an okay slot, it won’t blow most players hair back, but it has a few things going for it if you can see past the generic look.

African Quest possesses few elements you haven’t seen before but it might do enough to entertain fans of Microgaming’s Hyperspins mechanic. 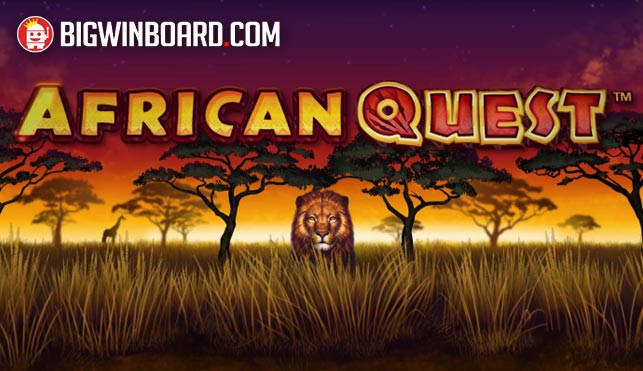