Jane Blonde dates back to a time when Microgaming was a relevant developer, something that now seems like ages ago. Originally released in 2005 and still available across many Microgaming casinos, Agent Jane Blonde stands the test of time. Despite the bizarrely dated graphics, it's more enjoyable than most of the stuff Microgaming and its partners have been churning out as of late. 14 years down the road, Microgaming has decided to revitalise the heroine agent with partnering studio Stormcraft in charge of the task of producing the sequel.

With 5-reels, 15-paylines, Agent Jane Blonde Returns can be played from between 0.05 to 400€ per spin on your computer as well as your mobile devices. If you're looking forward to a slot rich in features, you're going to be utterly disappointed. There's a Respin feature that transforms scatter symbols into sticky wilds, but that's about it.

Having received a facelift, Jane looks absolutely stunning and has aged well, so visually, at least, it's quite a leap forward. The story still centres around espionage, manoeuvring and double-dealing, and the retro feel goes well with the James Bond-inspired theme. In the backdrop you'll see a city skyline at night with its neon lights illuminating the sky above - impressive artwork, without a doubt.

Reading the paytable reveals nothing out of the ordinary. Instead of the typical royals you'll see watches, laptop computers, cars, money and passports and handbags, while the premiums are represented by Jane herself appearing in different outfits - diving gear, stealth mode, undercover and fashionably dressed. Jane also represents the wild symbol - it performs the usual duties of replacing all symbols bar the scatter.

As mentioned, the slot is rather basic and does not include a traditional free spins feature. What you get instead is a Respin feature. Whenever 2 scatter symbols land simultaneously on the reels, the Respin feature is triggered.

The original Agent Jane Blonde belongs to a line of classic slots that were ground-breaking when originally released by Microgaming. The sequel, however, takes a big dump on its legacy and every veteran gambler must be dumbfounded to see poor Jane being turned into a joke here. Things become even more confusing seeing how much money Microgaming spent trying to hype the title at the London iGaming conference back in February.

Agent Jane Blonde Returns has a horrendous 300 times your stake max win potential per single spin, which is quite shocking. The slot is in desperate need of multipliers, a boost in symbol value or even a turd flying across the screen in true South Park fashion just to make it more playable.

It makes you question if Microgaming even bothers to inspect the products released by their partnering studios who apparently know a lot about game design but seems to have limited understanding about the mindset of gamblers. The visual design is absolutely top-notch and some of the best to ever come from Stormcraft Studios which is why it's sad to see a mathematical design so unbelievably ridiculous.

Agent Jane Blonde Returns is all looks and no brains. 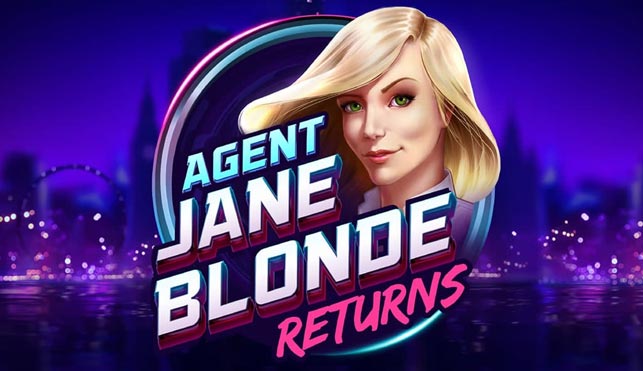