Independent developer Spin Play Games presents their second slot Almighty Aztec, a game powered by Microgaming and based around the South American legend of Quetzalcoatl. Their debut, Roman Power, was a meagre effort that didn’t make much impression. Almighty Aztec is aimed at a different audience, however, one after a gentler math model and cool with low potential. Coasting players into the modest wins are features such as expanding wilds, free spins, plus a bonus buy option.

Quetzalcoatl is a slot stalwart, and Aztec fans will no doubt have run into the chap several times before. Spin Play has designed a bright green jungle for the winged serpent to meander in. The 5-reel, 10-payline grid is surrounded by leafy foliage next to a temple, along with the type of rhythmical backing track that usually accompanies this sort of thing. What is not quite so colourful are the reels, which display a plain beige background behind the low pay symbols. It might have worked betting if the slot was transparent, or semi-transparent at least, to take in more of the setting.

Almighty Aztec may be played on mobile, tablet, or desktop, offering bets of 10 p/c to a £/€500 per spin. A massive max bet it seems, but the exposure is tempered by a rather low top win. Almighty Aztec’s math model further separates players keen to give it a spin from others more indifferent to its charms. The game has a theoretical return to player rate of 96.38%, so there shouldn’t be too many complaints there. Medium volatility rounds out some of the bumps, and thrills, while a hit rate of 26.14% fires off a win more often than once every four spins.

Having a positive effect on the hit rate, is a pay-both-ways system - left to right as well as right to left. So while there are only 10 paylines, players effectively get 20 to land winners upon. There needs to be at least three of a kind, adjacent from the leftmost or rightmost reel.

Almighty Aztec provides 8 regular pay symbols to win with, split 50/50 between low and high pays. The lows are 4 multi-coloured gemstones, while the highs are a tablet, a bird, a snake, and an Aztec warrior. Values are quite good, ranging from 5x to 50x the bet for the four premium symbols. Wilds appear as a blazing sun on reels 2, 3, or 4. When one is in view, it expands to cover the entire reel it landed on.

A few features pad out Almighty Aztec, the winged serpent Quetzalcoatl playing a part in some them. Quetzalcoatl isn’t just content to sit on the side-lines to watch the game go by. From time to time, he randomly flies across the reels, dropping up to 3 wilds. These wilds can land on reels 2, 3, or 4 and expand to cover the full reel.

Almighty Aztec climaxes with a round of free spins triggered by the calendar looking scatter symbol. Land 3, 4, or 5 scatters on any reel to win 5, 8, or 12 free spins respectively. Free spins begin with the third reel wild which stays that way for the full feature. If a wild lands on the second or fourth reel, it remains wild for the remainder of free spins. Scatters also payout at a rate of 2x, 10x, or 50x the bet for 3, 4, or 5 in view – in any position.

Free spins are the most volatile and potentially profitable part of the game, so Spin Play has added a bonus buy feature to go straight to them. Shelling out 50x the bet instantly gets you 5 free spins.

On the whole, Almighty Aztec feels like an improvement over Spin Play’s debut Roman Power. The graphics are more refined, the animations smoother, the features better integrated with the theme and pay mechanic. It’s a slicker production all round that feels suited to the crowd they have targeted.

Almighty Aztec has been designed for casual gamblers who shy away from highly volatile slots in a bid to stretch their betting bucks as much as possible. This goal is stated in the game blurb, so Spin Play is upfront about it. Yet, it is interesting the studio has aimed the Almighty Aztec at players looking to keep the bankroll going, but have bolted a feature buy on as well. Shelling out 50x the stake seems a little at odds with taking your time with a game.

It is a tempting option as well since Almighty Aztec squeezes its best moments into those few spins. Sometimes Quetzalcoatl will add extra wilds at the beginning of the feature to join the middle wild that comes as standard. If this happens, free spins typically play out quite well and you have a good chance of ending in the black. Starting with just the middle reel wild though makes the going a lot tougher.

Players after a Starburst(ish) experience in the jungle with free spins may be interested in what Almighty Aztec has to offer. The two share similarities in gameplay, despite having completely different themes. This is mainly due to the pay-both-way mechanic, expanding wilds, and gem symbols. Another thing they share is max wins in the region of 500x. It all adds up to a low thrills game that won’t bite too hard, or entertain a whole lot for that matter.

Almighty Aztec is a colourful slot which might suit players looking to stretch a bankroll, but with few other thrills or benefits beyond that. 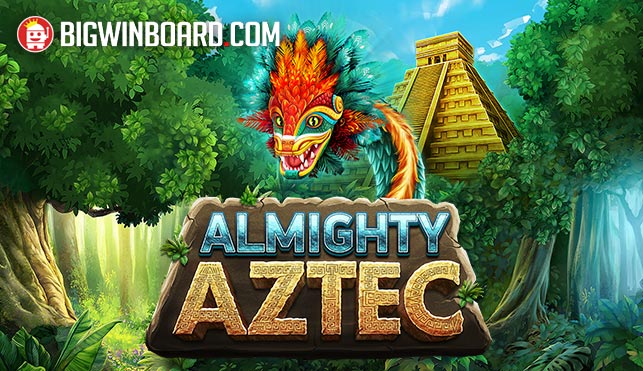