✅ Play Apes of Wrath on

Players into American realist literature will be a tad disappointed they won't be joining the Joad family and the rest of the 'Okies' on their trip west to the so-called promised lands of California. Instead, developer iSoftBet has used a clever play on words to shift the action away from the dust bowls and migrant camps of North America to the thick green jungles of Africa. Here we find one wild-eyed gorilla playing the alpha male, joined by a bunch of betas as well as respins, free spins, in a game that won't exactly blow you away with innovation.

Apes of Wrath has a classic wildlife look about it, a sort of Wolf Gold meets Gorilla Kingdom that feels familiar. From the overly bright low pays to the expressions of the animals appearing on the reels, it comes across like a slot from yesteryear. A 5-reel, 3-row grid sits amidst ponds and trees, while sunlight filters in through the leaves as mosquitoes buzz about. Initially, there isn't much separating Apes of Wrath from a dozen other jungle games out there, and to be honest, that assessment persists throughout the rest of the experience. 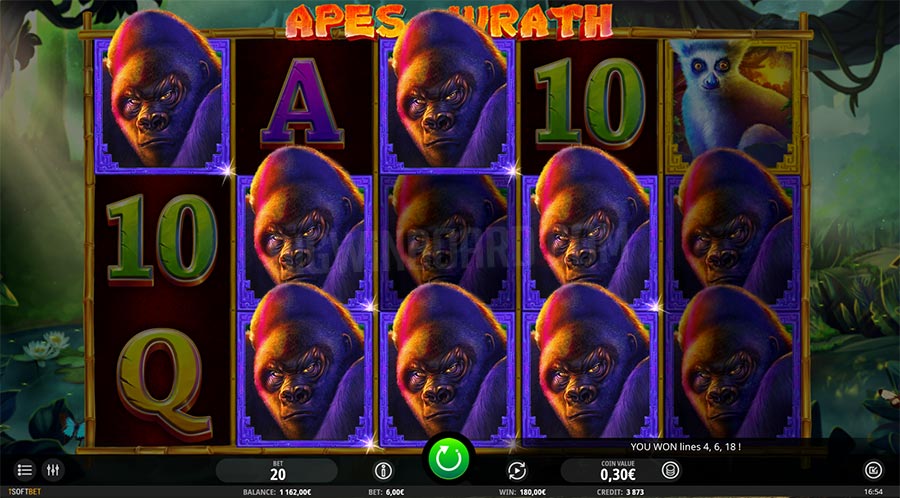 The game is available on any device, where players can set bets of 20 p/c to £/€20 per spin. Volatility hovers around the middle of the spectrum, meaning this ape isn't quite as wrathful as some players may like. Potential isn't huge either and it will most probably take a stack of wilds in features to get the most out of it. Even then, don't expect a shower storm of diamonds to come raining in as you will see. RTP isn't bad though, where Apes of Wrath has a theoretical return value of 96.01%.

On a regular base game spin, there are 20 paylines to land winning combinations of 2 to 5 of a kind on. At the lower end of the paytable are 10-A royals, then four high pay animal symbols. This latter lot is made up of toucans, little furry creatures, crocs and gorillas. Five of a kind animal wins are worth 12.5 to 25 times your stake, and the top two premiums pay out for two of a kind or more. One last symbol before heading to the features is the wild which also displays a gorilla. It has no value of its own, but can substitute for all symbols except the bonus to form winning combinations.

For the most part, features are pretty circumspect, like the rest of Apes of Wrath really. Accompanying a round of free spins awarded from a Bonus Wheel are Wild Ape Respins – both expanding the grid when triggered.

Landing a scatter symbol on reels 1, 3, and 5 triggers the bonus wheel. The wheel plonks itself in the middle of the screen, awarding up to 20 free spins + up to 50 added wilds. Once the number of free spins/wilds has been calculated, the bonus game starts. This is also played on an expanded 4x5 sized grid with 40 paylines in action. Aside from the extra wilds on the reels not much else changes. Well nothing really. On a last note, free spins cannot be retriggered.

"I'm jus' pain covered with skin", said Sairy Wilson to the Joad family as they made their way across America to the promised land. Players are unlikely to hit those levels of despair when spinning Apes of Wrath, but it's not a game that amps you up to push the limits of slot design either. Wilds rule this jungle, which contribute to most of the game's biggest payouts and entertainment. Big is a relative term as Apes of Wrath is a better fit for players who aren't in the mood for grappling with a wild beast of a game. Looks are average, potential is so-so and features aren't as effective as they first appear to be.

Take Wild Ape Respins for example. One thing to be clear on is that the 3-reels of ape wilds are not sticky. So instead of having a nice 3x3 wild block in the middle of the screen pulling in all sorts of combos, it breaks up to distribute the nine wilds over the reels. Maybe they show up on a respin, maybe not, which is a disappointing realisation. Getting an extra row to play with is always a bonus as are more paylines, but don't expect riches from them. At best, a full screen of gorillas would be worth 1,000x the bet, so overall potential isn't huge. Maybe it's the reels/paylines setup, but free spins aren't hugely exciting either despite benefitting from an expansion. They end up being basically an extended batch of Wild Ape Respins, plus they cannot be retriggered.

Apes of Wrath might be alright for some middle-of-the-road, physical slot type gaming, though it’s not as wrathful as its name suggests. 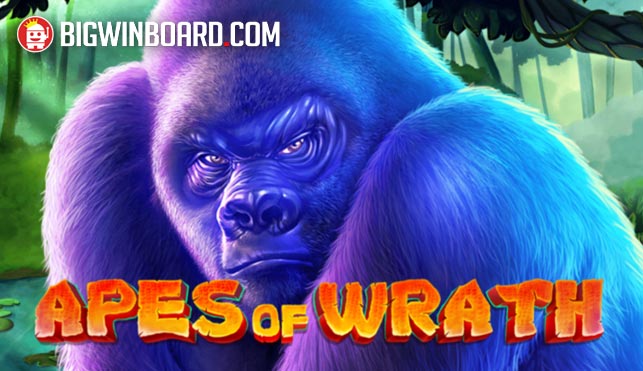