The internet has a bunch of definitions and translations for the word bomba. Many are a little inappropriate for a wholesome game review so won’t be repeated here. In our case, it stands for a bomb, and this energetic new slot from Yggdrasil Gaming is full of them. Interestingly, there is a bit of debate online about the correct translation of the word. Portuguese being the national language, the two words that pop up are bomba and bombear. Yes, this might be a little pedantic, but it’s our job to dissect games and present the findings. Not to worry, bomba is widely accepted so let’s go with that and let a few off on Yggdrasil’s new slot.

Brazil Bomba is based around the carnival in Rio de Janeiro. This multi-day festival is called the biggest show on earth, and 2 million+ people throng the streets. Brazil Bomba taps into the spirit but is more laid back feel than extravagant. Still, we get one of those feathered dancers on the side of the screen celebrating wins and nuking symbols from time to time. If you can’t see her, you are probably in portrait mode on a mobile. Turn it to landscape and there we go. She stands beside the game area which is made up of 8 reels and 6 rows. We also get plenty of fireworks and beach action so the atmosphere is nicely warm and exotic.

Being Yggdrasil's first ever cluster pays slot, winning clusters are formed by 6 or more matching icons. Winning symbols can touch horizontally, vertically, and even diagonally, which is a little unorthodox. It is also possible for any pay symbol to completely stack the reels. Fill the screen with 48 red samba drum symbol, and you will earn a tidy 1,000 times the stake making it the highest paying symbol. The rest, in descending order, are what appears to be yellow, pink, purple, green, and blue drums or fire crackers boxes. The low pays are red, yellow, pink and purple diamond shapes. The paytable is worth a look. It lists every single symbol combination from 6 – 48 and how much they pay according to your current bet size. There are reams of figures and scrolling through them is like how Neo sees the Matrix.

Speaking of figures, those that power Brazil Bomba are respectable. First up is an RTP of 96.3%, along with an encouraging hit rate of 22.81%. Volatility is not as high as some recently released slots with similar reel setups but is still capable of intense gaming with a 8.5/10 medium-high setting. A good range of betting options is on hand. Though the highest of rollers might feel left out by stakes that start at 10 p/c and go as high as £/€50. One thing that does not appear is wild symbols. It is a little surprising with how heavily they feature in other similar styled games - grid slots for instance. That might be a little disappointing at first, but Brazil Bomba’s features manage to make do just fine without one.

Brazil Bomba doesn’t exactly overflow with features the way the Rio Carnival does. But what it does have works well. The first to be aware of is Dropdown Wins - when a winning cluster is formed, it is removed from the reels to let a fresh batch of symbols fall into place which can lead to more winners. The Dropdown Win feature repeats until no more clusters appear.

Well, it wouldn’t be a bomba without a bomb showing up somewhere. The Bomb Symbol can land anywhere during the base and bonus games. When it activates, it explodes in a star formation removing up to 16 symbols to let new ones fall into place. It does not remove free spin symbols or other bomb symbols, though only one bomb symbol can explode per Dropdown.

Working hand in hand with Dropdowns is the Multiplier. Every Dropdown win or Bomb feature activates the multiplier for the following Dropdown and adds +1 each time. It keeps increasing while Bombs or Dropdown wins occur. During the base game, it resets back to normal at the start of each new spin.

The final symbol in the game is the scatter. When 3, 4, 5, or 6 of these are in view, they award 5, 10, 15, or 20 Free Spins respectively. The major bonus during free spins is that the multiplier does not reset but continues to climb ever higher as more wins occur.

For a slot based on the Rio Carnival, Yggdrasil could have gone completely wild, but the end result more moderate. This goes for graphics, effects, and also for features and mechanics. It’s not as volatile as many recent grid slots which rely on two or more features coming together for big hits. Brazil Bomba is simpler and not so all or nothing as a game like Dragonfall for example. It's also not as sophisticated or refined as those grid slots coming from Play'n GO.

With Brazil Bomba, you just need to be concerned about one thing – landing free spins and letting the multiplier do the rest. Not saying that is easy, it’s just less reliant on several moving parts. It is good to know that when free spins happen, the game’s potential can be worth the wait. On max bet, the default maximum win is 8,975.6 times the stake. Not the most rewarding slot perhaps, but certainly rewarding all the same.

To sum up, Brazil Bomba is not the carnivalistic mega volatile extravaganza or feature-rich game it could have been. But that’s not necessarily a bad thing. It offers a more straight forward slot experience with pleasing effects and features, and a solid potential backing it all up. The base game can dish up high-value clusters which are made even more desirable by the Multiplier. Or, score a good roll during free spins and you’ll feel like dancing samba at the Copacabana Palace. Overall, it's not a bad first cluster pays slot yet it could have been better given the competition that is out there.

Brazil Bomba is not the massively volatile roller coaster it could have been, but it does provide a more rounded experience than many similar styled slots, with solid potential to boot. 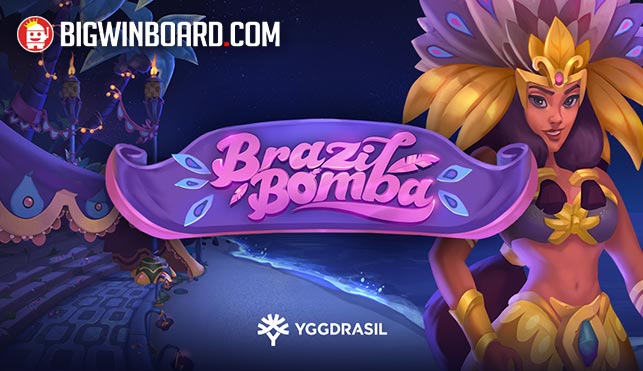