✅ Play Cashed in Stone on

SG Digital developer Core Gaming has a thing about the past. This time they have gone all the way back to the dawn of humanity. When it comes to human history, it doesn’t get much older than the Stone Age where Cashed in Stone is set. This is a cartoon world of knuckle draggers with sloping foreheads bashing each other with dinosaur bones. The previous Core Gaming title to come our way was Viking Hoard, which was a real test of patience and fortitude. So it was with some trepidation that we fired up Cashed in Stone.

Visually, prehistoric isn’t a bad word to describe the game, particularly the UI. The graphic standard isn’t high, though the rolling hills of the background are pleasant. Cashed in Stone comes with its own mascot. A cute wee caveman, who looks a little like Animal from the Muppets. He adds a much-needed dose of humour to lighten what could have been a starchy slot. The setup uses a 6 reel, 4 row format with 4,096 ways to win. As with Viking Hoard, the symbols fall into place and are part of a cascading win system. Winners are removed to let new symbols tumble to create chains of wins from one spin. Players choose bets from 25 p/c up to £/€100 per spin on virtually any device.

Winning combinations are formed by matching 3 or more of a kind. The paytable is made up of 10 – A royals and a bunch of high pays. This includes a bone with meat, a stone axe, a necklace, and a BAR symbol. The most valuable is the Logo which only needs two of a kind and pays 40 times the stake for a six of a kind combo. Due key factors that we will look at, RTP ranges from 96% down to an unusually low 91.95%. Volatility is in the low/medium region but plays and feels quite high at times - although nothing like the dull uneventful slogs that Viking Hoard could produce. Rounding off the paytable is the wild symbol which can substitute for any of the regular pay symbols.

Cashed in Stone comes with a surprising amount of features, some of which require player input. These come in the form of reel modifiers, collectable free spins, and a bonus game for good measure. To the modifiers first and there are four of them which can randomly appear on any base game spin. We have:

The caveman symbol is the scatter and three in view trigger the Big Money Wheel Bonus game. During this round, a two-tier prize wheel is spun. The first wheel is split into segments containing multipliers of x1 – x5. If the wheel stops on a multiplier segment, it is applied to the total bet and can turn into a red cross. The wheel keeps spinning and adding up wins unless the wheel stops on a red cross then the game is over. There is one other segment though, which is a green arrow. If the wheel stops on this, then it unlocks the second tier wheel which has the same rules but multipliers of x10 – x250.

The last feature of note are the Free Spins which are little more complicated than normal. When players land a free spins symbol, it moves the spins trail up one notch. The spins trail has three sections; The lower section has 1-5 free spins with 2 guaranteed wilds each. The middle section is 5-10 free spins with three wilds. The final section is 10 free spins with a 2x2 wild on each spin. Players can choose to activate their accumulated free spins at any time by hitting the green button beneath the trail. The only exception is the final section which triggers automatically when it is reached. One interesting aspect of free spins is that when they are activated, the bet level used is an average of all stakes in the game up until that point. Free spins cannot be retriggered.

After a few initial spins, memories of Viking Hoard came flooding in like a Nam flashback. Remembering what it took to land features in that slot a question arose – are we up to this again? Fortunately, features drop more frequently with Cashed in Stone. The math model has had the ‘ruthlessness’ setting turned down which is appreciated. In saying that, patience is still needed. It can take a lot of spins to reach the end of the free spins trail. The free spins option is a little controversial.

Triggering lower amounts of free spins drastically reduces the RTP rate. It can go as diabolically low as 91.95%. Then again, if you commit to going all the way, you need to be prepared for the investment in time and coins to get there. So it is worth it? Potentially the game is capped at 250,000 from one spin which is high. Realistically, players are likely looking at max returns of around 5,000 times the stake.

Cashed in Stone is not a copy of Viking Hoard, but they have a lot in common. The main problem is that what was annoying about Viking Hoard remains just as annoying this time around. Graphics are clunky, and the base game can be glacial. To its credit, you will probably experience more features with Cashed in Stone than with Viking Hoard. Despite the wee caveman’s best efforts, Cashed in Stone just isn’t all that fun to play. Fans of prehistory might find value, and it is an improvement from Core Gaming. In summation, Cashed in Stone is more enjoyable than Viking Hoard was, but still about as fun as being smacked over the head with a dinosaur bone.

Online slots enthusiasts could easily find 10-year-old games that play, sound, and look much better than Cashed in Stone. 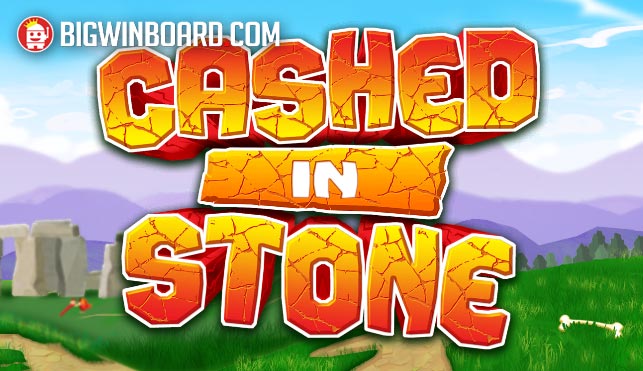