Showing it's not all Pocketz and scratch cards, developer Hacksaw Gaming has come up with another original slot called Chaos Crew. As we've come to learn, Hacksaw enjoys building quirky, personable games and such is the case with Chaos Crew too which revolves around a cat called Cranky and his sidekick Sketchy. Prepare for all sorts of oddities like that in a game full of random imagery which somehow comes together in a pleasantly coherent mash-up.

Chaos Crew is presented in a neon, anti-establishment way, similar to the one found in Punk Rocker. Chaos Crew isn't as in your face as Nolimit City's game was, but it's no less volatile or potentially profitable. In spite of its 5x5 grid setup, it's not a cluster pays slot, but is played using 15 fixed paylines. Located in a graffiti-filled back alley, and accompanied by an electro track which sounds nothing like the original punk sound while still conveying the ethos, the overall effect is weird, yet strangely satisfying.

Playable on any device, Chaos Crew offers stakes starting at 20 p/c, going as high £/€100 per spin. Don't expect too many wins on those spins, the game is highly volatile, and deals out plenty of empty runs along the way. Balancing things out, in the long term, is a solid RTP rating of 96.3% and a bonus game that can go mental. Prepare for the game to turn into a slog though, which can be taxing.

What makes it tough to get ahead is the low number of paylines, just 15 to be precise, and the generally low symbol values. Combinations of three to five are possible utilising an odd collection of 9 pay symbols. From low to high there are eight balls, skulls, smiley faces, crosses, and lighting as the low pays. Then there are moths, brains, apple cores as the mids, and tentacles as the high pay. Five of a kind mids will get you 5x the stake, while a full line of tentacles is worth 12x the bet.

Most of the time, Chaos Crew's extras consists of a special wild to modify wins. The only other feature is a bonus game which can either be triggered or bought.

Cranky the cat is wild and can replace any other symbol in the game except the scatter. It is also a mystery multiplier that multipliers the line win. When it lands, it will display one of the following values: x2, x3, or x5. If more than one Cranky Cat symbol is on the same win line, the multipliers will multiply each other.

When free spins symbols land, they are accompanied by a quick little record scratch sound - land 3 of them to trigger the free spin mode. This mode starts with 3 spins, continuing until you get 3 non-winning spins in a row. Every time a winning symbol lands, the amount of spins is reset back to 3.

Above each reel is a number. At the end of the bonus, these numbers are added up and multiplied by the total bet to calculate the prize. This mode plays out on the same 5x5 grid, but the symbols change up. Most of them are place-holder symbols which do nothing except display words of encouragement like 'Nope!'. The possible active symbols are:

A little unusually for Hacksaw Gaming, Chaos Crew allows players to buy the bonus rather than wait for it to trigger. The cost for doing so is 129x the bet, guaranteeing three scatters on the next spin. Interestingly, the RTP takes a slight nose dive to 95.92% when accessing free spin this way which may be somewhat of a deal-breaker.

Hats off to Hacksaw for producing another enjoyable slot that quietly goes about the business of being highly playable. Chaos Crew does things a little differently, creating a rather unique gaming experience, though one not devoid of drawbacks.

Issues include the grid which seems massive for the small number of paylines. On paper, a 5x5 slot with 15 paylines sounds a little off, yet it's not so bad in practice. There are plenty of dead spins, or mini wins due to the generally low value of the symbols making it an all-or-nothing type slot, no doubt. Occasionally a line of tentacles will link up with a multiplier or two to help keep you in the game, but for the most part, wins are tiny. For a while, it's not so noticeable. The unusual look, the brill soundtrack, and the successful subtlety of the whole production make it easy to overlook. That is until you notice the balance has headed sharply south. It is highly volatile and requires patience to make things happen.

Chaos Crew isn't high thrills a lot of the time, though there are definitely moments. Each element has been crafted just so, contributing to the fun-factor, where oddness helps distract from brutality when sessions turn into a taxing grind. The bonus game certainly has a highly volatile nature. There you want to build up as large a multiplier as possible in a similar manner to games like Money Train 2, albeit in a less sophisticated way.

While Chaos Crew has a rather large reward in the form of a 10,000 times the stake payoff, getting there isn't for the faint-hearted. Chaos Crew might look cute in its free-spirited way, yet this lot will chew through the unwary without a second thought.

Chaos Crew is a solid slot with plenty of attitude that partially makes up for a lack of gameplay depth with its oddball presentation. 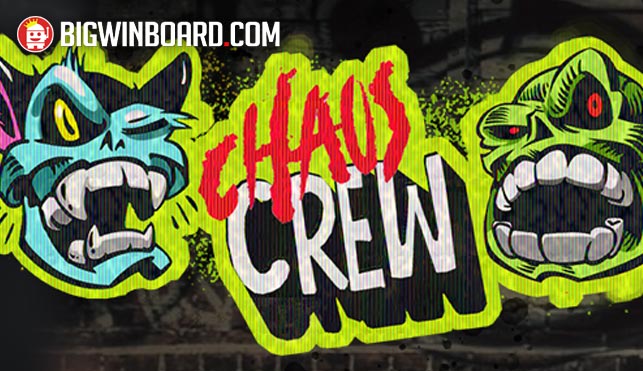