Developer Hacksaw Gaming expands their portfolio with its very first sequel. Cubes 2 is the follow up to the highly playable Cubes slot which ended up being quite a hit for the studio. Cubes and Cubes 2 aren't like regular slots since there are no reels as such, or much in the way of spinning. Instead, they're more like a grid slot meets Rubik's Cube meets Tetris. If that sounds a little gimmicky, be assured the gameplay can be deceptively compelling.

As we're becoming increasingly accustomed to the unique style of Hacksaw Gaming, the stripped down, retro-feel look of Cubes 2 doesn't stand out all that much at first sight, where its rather plain 5x5 grid made up of multi-coloured blocks fronts an equally plain background. Looks aren't everything though, and Hacksaw has a real talent for squeezing as much as possible out of a few minimal elements. The first change is the 'X' has been moved from the middle position to the outer four corners. As before though, 'X' symbols trigger a couple of features when used in a win.

Pocketz games, as they are referred to by Hacksaw, are designed with mobile users in mind, so the grid is pretty much all you see on a smartphone. Playing Cubes 2 on a larger-screen doesn't expand the visual experience much, except during bonus games, when a new 3D animation has been added. Don't expect anything fancy though, as the focus remains almost entirely on getting cube symbols to perform.

As alluded to, Cubes 2 is playable on any device, allowing bets from 20 p/c to £/€100 per spin. As part of the transition from casual gaming to a high powered gambling machine, volatility has been cranked from medium to a high setting, rated 5 out of 5. The RTP configuration has ever so slightly dropped from 96.35% to 96.33%. Strangely, instead of increasing RTP, as is typically the case, the bonus buy option offers a lower configuration at 96.30%. Whether this has to do with the volatility of the feature or not is up to anyone's guess.

As for the paytable, it's taken up by six plain square tiles, and that's it - there are no scatters or wilds around here. Each symbol possesses the same values from 0.10x for five of a kind up to 40x for clusters made up of 25+ similarly coloured symbols.

Cubes 2 does everything the original did, it just does a whole lot more of it. Fundamentally, the goal is to connect at least five matching symbols of the same colour anywhere on the grid. If a winning combination hits (which has a frequency of 15.68%), the game area grows 1 cube in every direction, creating a 7x7 sized grid. Expansions occur on consecutive hits until the grid reaches a maximum of 11x11 in size. When no new wins form, the grid is restored to its default 5x5 size for the next spin.

The free spins feature in Cubes 2 is triggered when 5 cluster wins made up of different colours occurs in a spin sequence - 5 free spins are initially awarded and before starting, several cubes appear on the screen for players to click. The revealed numbers add free spins until your designated colour comes up, at which point the picking game is over and free spins commence. During the feature, any wins made of the chosen colour become sticky. Also, the grid does not reset between spins, so if you make it to the max configuration of 11x11, the grid stays at that size. What also makes free spins stand out is the Color Blast feature; if 50, 70, or 90 sticky blocks of the chosen colour are on the grid, an instant prize of 500x, 2,500x, or 7,000x the bet is awarded.

The second bonus game is Multi Color free spins, triggered when all corners of the grid are the same colour on the initial spin. Again, players pick cubes before the feature starts to determine the number of free spins and the block colours that will be sticky. The rules of this round are the same as the previous bonus game, except the Color Blast does not appear.

One last addition sure to delight some fans of Cubes is the feature buy. There are 2 options here; one is Multi Color free spins costing 109x the bet, and the other is free spins which sets you back 129x the total stake. Alternatively, hitting a bonus organically happens once in 223 spins on average.

Cubes is one of those games you might not think was ripe for a sequel, but once you've played part 2 the decision is obvious in hindsight. Hacksaw has wisely left in or fine-tuned everything which made part one so playable, while adding a few extras to make the sequel a much stronger game. Cubes already felt like playing a fun betting version of Tetris (even more so than the actual Tetris slot), yet Cubes 2 takes the experience next-level.

Players who liked the look and feel of Cubes but were turned off by its medium volatility or so-so potential, would do well to check this one out. Cubes 2 goes a long way to redressing any shortfalls. The math model certainly packs additional punch, making it possible to win a much larger pile of coins this time around - 7,500x in Multi-Color free spins, or 11,000x in free spins.

Gameplay-wise, the highlight is building a big sticky cluster early in a bonus round while banking a bunch of repeat wins off it. Getting on a solid roll in this way makes the game real hard to put down. This is especially so if you also score a Color Blast reward in the process, which occurred a couple of times during testing.

It doesn't take long for the differences between the two Cubes slots to become apparent. Looks might not have changed much, but Cubes 2 is an upgrade in every other respect, making it a much more potent game than the first. Cubes one still has its place on the morning commute, but for an extra dose of lethality, Cubes 2 is a bigger game in every regard.

Cubes 2 may not be an epic sequel to the original, but comes with a few interesting upgrades that makes it well worth a try for any fan of Hacksaw’s unique style. 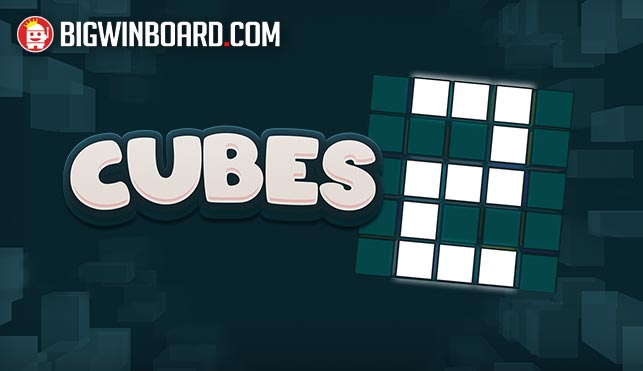