Microgaming partner Just For The Win reuses key concepts found in a slightly older slot Western Gold, giving everything an Irish overhaul for Emerald Gold. Yes, we are tripping from one populous category to another, experiencing more or less the same gaming. Emerald Gold avoids clone status, though. Just For The Win has done this by altering stats, mainly potential, which is much greater than it was in the Western one. Is it successful follow up? Let’s chase cheerful Celtic sprites across rainbows to find out. 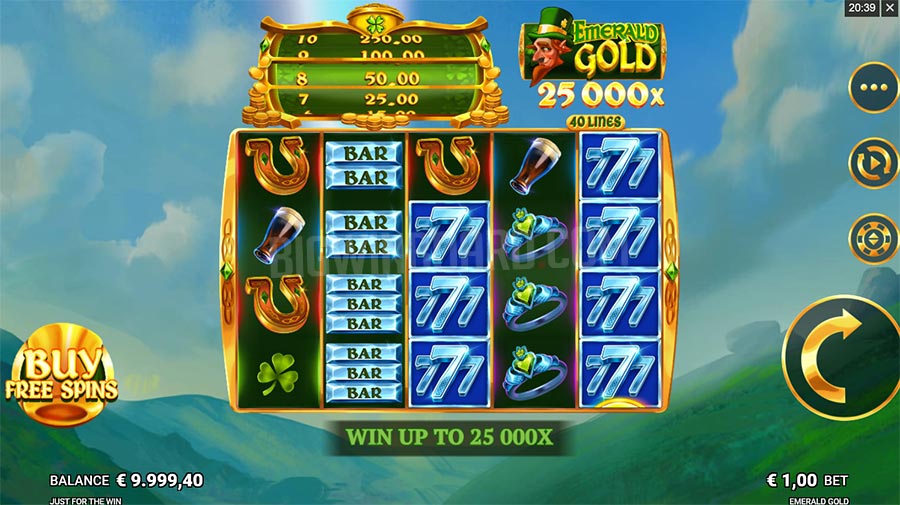 You certainly know you’re playing an Irish slot when Emerald Gold fires up due to the familiar symbols and the leprechaun sitting above the reels. A nice touch is a backdrop with a pleasing oil painting quality, a quite sublime image of Ireland’s countryside sitting behind the 5-reel, 40-payline grid . The clouds, in particular, possess an almost Paul Henry landscape look about them. It’s easy to go overboard with the jolly Celtic imagery when designing a slot, so hats off to Just For The Win for striking a balance between cliché and quality when it came to Emerald Gold’s visuals.

Western Gold wasn’t a game for the timid, and neither is Emerald Gold. Here we find a math model which is highly volatile, where even low level scatter wins (the central feature) can struggle to keep you afloat. However, prizes at the upper end of the scale are massive. RTP, meanwhile, is the same as before on 96.12%, though hit frequency has taken a slight drop. Still, at 35.81%, wins land often enough to keep you busy while the leprechaun works his magic and (hopefully) a pot of gold can be yours. The chase takes place on any device, setting bets from 20 p/c to £/€10 per spin.

Opening up the paytable, here’s where we dive deeper into Irish culture. Well, Irish culture as it is traditionally found in a slot. On the low side are symbols such as three-leaf shamrocks, glasses of beer, heart rings, and lucky horseshoes. More lucrative are high pay single, double, triple bars, plus a lucky sevens icon. Land a full five of a kind made up of premium symbols to win 3 to 30 times your stake. The golden ‘W’ wild helps in this task by replacing regular pay symbols to complete a win. As well as this, it has the same value as the sevens symbols, when landing in its own combinations.

Finding a four-leaf clover out in the wild is meant to be good luck. They are used in Emerald Gold as the scatter, and collecting a bunch of them can bring quite a fortune. As well as scatter prizes, Emerald Gold offers a free spins feature. Both are the same as we saw in Western Gold, except now, Just For The Win has dialled them up several notches.

The free spins feature is triggered when 3 golden hat bonus symbols are in view on reels 2, 3, and 4. Here, players start the bonus with 3 free spins. Whenever a four-leaf clover lands, it is collected, resetting free spins back to 3. When spins run out, whatever has been collected, scatter wise, is paid according to the table laid out above.

Where available, the final extra is the option of buying free spins. Laying out 52x the total stake, players can go straight to the bonus game to start racking up scatters.

It seems like Just For The Win is on a streak of releasing ever more lethal slots, packing larger potential than the last. Western Gold was a turning point, offering surprisingly high instant wins from its scatter feature, and Emerald Gold pushes the trend along. The two games feel poured from the same mould, sharing similar setups, looks, and gameplay, meaning this could be the start of an interesting series. It’s pretty safe to say if Western Gold rocked your world, Emerald Gold will do so as well, provided the theme change is to your taste.

The two slots might be close, but they certainly aren’t clones. Emerald Gold has far bigger numbers than its sibling, giving the game a more compelling mission than before. The mission, of course, is landing all 12 scatters to hit the top prize. Free spins help in this regard, making the inclusion of a bonus buy a tempting choice. This is bound to be a pretty fun gambling tool for some, and the cost is reasonable as well as far as these things go. Bear in mind you’ll probably need to land a fair few scatters to end up in the black if you shell out for them, which isn’t always an easy task.

In a nutshell, Emerald Gold is more or less Western Gold, which in turn was like a more potent form of Gameburger’s 9 Masks of Fire. If its potency you want though, Emerald Gold far surpasses both of those games by a long shot. Not only is it highly volatile, but its 25,000x top prize makes many other slots which use similar scatter rewards feel small and pointless in comparison. 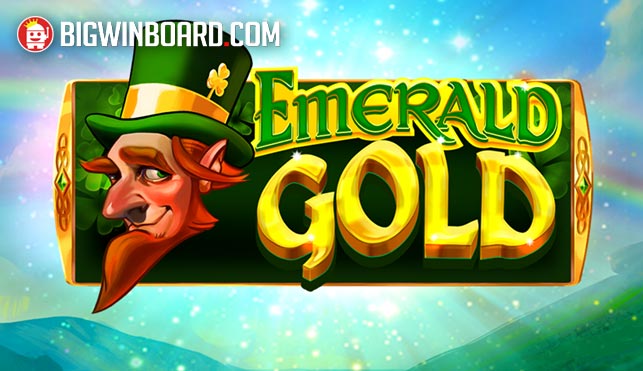