✅ Play Eye of Dead on

Developer Blueprint Gaming keeps the deluge of 'Eye of/Book of' slots flowing with the release of an amalgamation of the two styles in Eye of Dead. If you're in any way familiar with those two slot types, you'll more or less know what to expect. The studio has captured the classic look and feel, while including a symbol upgrade feature Eye of Horus is known for. It helps the studio has had a lot of practice designing these kinds of games. What we get is a slot that will probably thrill fans of the format, while offering little to others who are ambivalent.

Prepare to wind the clock back a few years when stepping into Eye of Dead's temple complex. The 5-reel, 3-row set up is thoroughly retro, displaying its 10 paylines along the sides of the grid like they did way back when. There's no music, so no Arabian inspired rhythm accompanies the gameplay. Instead, there is a blast of audio whenever you hit spin old-school style, setting the reels in motion. It's the same as the jingle Book of Ra plays, so there's another link to the game's rich history.

Where Eye of Dead differs from others in this category is in bet selection. From 10 p/c to £/€1 things are standard. Next however, are four Premium Play options maxing out at £/€10 per spin. Each one upgrades the high pay symbols so that at the highest level, only the two top premiums appear on the reels. It's sort of like having Eye of Dead’s bonus game during the base game, except you pay extra for the privilege. Sticking with numbers, Eye of Dead produces an RTP value of 96.3%, with no mention whether or not the higher bets change the figure. Volatility clocks in at high, so prepare for a major roller coaster ride of ups and downs like most of the other heavyweights in the 'Book of' section.

Wins hit when matching symbols of at least three of a kind land left to right from reel one. Low pays are J-A royals in a curvy Ra font, while a couple of the premiums look a lot like those in Book of Dead. Not so much the scarabs or jars, but the amulet, Anubis and Pharaoh are dead ringers for those Play'n GO used in their game. The top premium is an Indiana Jones wannabe who looks like he's hit the bar to unwind after a hard day of archaeologing. Anyway, landing combinations of 5 premium symbols are worth payouts of 20 to 50 times your stake. The last symbol for this section is the wild, which substitutes for any symbol except the book scatter. Wilds cover all positions on the reel when they land, playing an integral part in free spins.

Since Eye of Dead is basically Eye of Horus in a different loincloth, we get the same batch of free spins with their symbol upgrade system. Accessing the free spins game is made possible when 3 book symbols land anywhere on the reels. As well as awarding 12 free spins, players pick up a win of 2, 20, or 50 times the bet for 3, 4, or 5 scatters in view.

During free spins, the full reel wild receives a couple of new abilities. Whenever 1, 2, or 3 of them land at once, players receive an extra 1, 3, or 5 free spins to extend the feature. Wilds, also upgrade premium symbols, a bar along the top of the reels shows your progress. How it works is that the lower premiums are changed into the next one along on the paytable whenever the wild lands. So by the end, only top premiums and low pay symbols appear on the reels, increasing the chance of hitting higher value combinations.

If this style of gameplay isn't your cup of tea, it’s unlikely you’ll get too excited about Eye of Dead. Even if you are, there isn't a whole lot here you can't find in previous slots, yet the betting options are unusual. Unless you've dreamt about a mash-up of Eye of Horus features using Book of Ra audio-visuals, Eye of Dead feels a little superfluous. It could very well be a riot for higher rolling Egypt enthusiasts; otherwise, there's little point picking up Eye of Dead, unless experimenting with its Premium Play selections sounds tempting.

While the help files mention a win cap of 50,000x the bet, this is more a technicality rather than something that is ever likely to happen since full screen wins top out at 500x. Eye of Dead makes use of a well- proven bonus mechanic which can get quite exciting as you work your way through the paytable. However, without fully expanding special symbols found elsewhere, you can only accomplish so much. Another drawback is the relatively low value of the premium symbols. For those who like going large, Eye of Dead doesn't compare to high powered Egyptian where chasing 5,000x single spin wins is on the cards.

Eye of Dead might be alright for a taste of the good old days when things were a simpler and all that. Then again, you could just play an actual classic slot for a stab of nostalgia, though the stats here are more positive than a lot of older games. The new betting choices are intriguing too but do get pricier at the upper levels, so it might pay to demo them first to see if they suit your style. In a nutshell, this is Eye of Horus with a 'Ra' cosmetic shift offering bigger bets, so if that sounds enticing, prepare to get all wild and crazy.

Eye of Dead does everything a Ra/Eye of Horus enthusiast could ask for, though its unusual betting options might be intriguing enough to draw in other curious players. 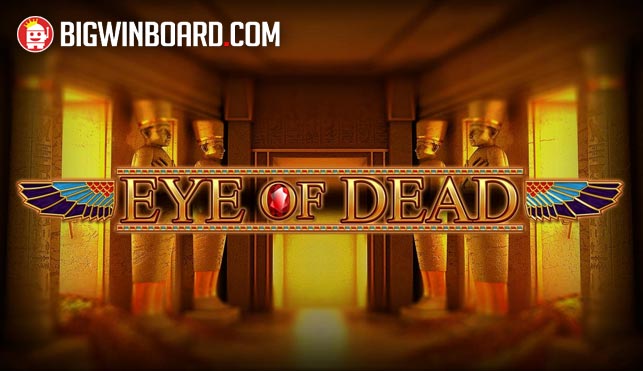