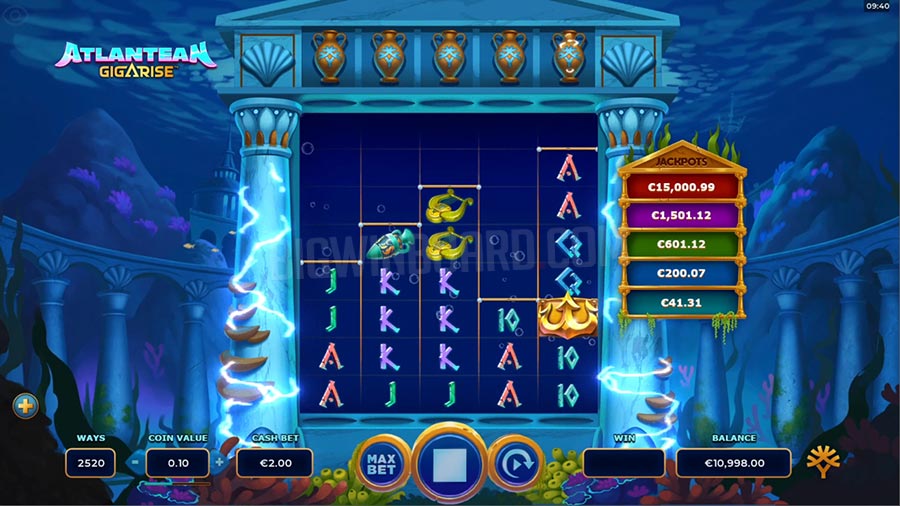 After the tour de force that was Hades Gigablox, there was some excitement when GigaRise Atlantis landed on the desk. Unfortunately, apart from the ‘Giga’ in the title, the two games have nothing in common. GigaRise Atlantis doesn’t even use developer Yggdrasil Gaming’s unpredictable Gigablox feature. Instead, it’s a gentle dip beneath the waves to the underwater kingdom of Atlantis, where jackpots, rising reels, and free spins reside.

If you’ve spent more than five minutes playing slots, it’s likely Atlantis has been crossed off your bucket list already. The mythical city that sunk to the bottom of the sea is a hugely popular game location. In GigaRise Atlantis it plays host to a 5-reel grid that looks a little lopsided at first. Each reel holds 3 to 8 rows which grow in height, changing the win ways in the process when the right symbols land. To either side of the reels, marble columns support a structure holding 5 amphorae which crack open to reveal prizes when reels grow to reach them.

More Greco-Roman structures appear in the background as fish lazily swim between them and weeds ruffle gently in the current. Speaking of gentle, it feels like the soundtrack’s main job is to send players off into a peaceful slumber. The problem is that it isn’t a counterbalance to some rip-roaring action. Quite the opposite, and a lot of the time it’s a dual battle between trying to score big, and stopping yourself from nodding off.

GigaRise Atlantis’ jackpot hunt is possible on any device, offering bets from 20 p/c to £/€40 per spin. To keep the jackpots satiated, 3.8% of each bet is siphoned off to feed the pot. A medium volatile math model awaits intrepid explorers, and quite a few features accompany it. Don’t get your hopes of winning too much outside of the jackpot though. GigaRise Atlantis isn’t one of Yggdrasil’s high performers. It’s more of a middle ground option more concerned with experimenting with new reel forms than showering lucky players in riches. Jackpots aren’t bad, nor is the RTP value, generating a figure of 96%.

As reels rise, so do the number of win ways, climaxing at 32,768 when each has the full 8 positions in play. Wins occur left to right when three or more matching symbols land, regardless of row height. A bunch of cute icons have been used for the pay symbols, starting with 10-A card royals, topped by high pay amphorae, lyres, swords, helmets, and some jewellery. Values are depressed to compensate for rising reels and ways, so when a win consisting of five premiums lands, expect a win worth up to 2 times the stake. The last symbol to cover before deep-diving into the most promising parts is the wild. The wild is a golden column and stands in for any pay symbol type to complete a winning combination.

Be sure to keep an eye on those trident symbols which trigger the Rising Reels feature. When they land, their respective reel is increased by 1 position while also expanding the paylines. Each reel stays raised between spins, and when a trident lands on a fully expanded reel 8 rows in height, the bonus game is awarded. There are 3 prize sets available here – bronze, silver or gold, offering ascending values.

The bonus game uses 1 highlighted horizontal payline and every symbol that lands on it awards either free spins sessions of up to 80 spins, cash wins up to 200x, or jackpots. The round starts with 3 lives, deducting 1 when no prize lands on the payline. However, spins are reset when prize symbols do hit. Now, landing a jackpot symbol in the highlighted area awards its corresponding value. These jackpots are progressive, possessing seed values of €40, €200, €600, €1,500, and €15,000 for the Forgotten, Rare, Mythical, Ancient, and Legendary Jackpot respectively.

There is a time and place for everything, as they say, so for a lazy dazy jackpot hunt beneath the waves, GigaRise Atlantis might be alright. Don’t expect a high thrills experience when you are there, though. It comes across as a jackpot game better suited to casual gamblers, and a somewhat bloated and over-complicated one too. Lower rollers especially will be able to make more out of the top rewards. As an example, hitting €15k when max betting is only worth 375x the total stake. Of course, jackpots are progressive, so the rewards could theoretically be a lot higher.

The whole theme treatment and low energy gameplay reinforce the impression of a game happy coasting in second gear. There is a metaphorical third gear, where non-jackpot wins can reach as high as 4,370x the bet. Not hugely exciting, but if you’re cool with the laid-back environment as a whole, then that amount is probably more than enough of a motivator to paddle around in GigaRise Atlantis’ aquatic world.

There are far better jackpot slots than Gigarise Atlantis out there, but its rising reels and amiable atmosphere nevertheless provide a fairly pleasant experience.