Demo play is not available in your region. Please visit one of the casinos listed below for free play.
LeoVegas

Developer Inspired adds to their Megaways portfolio with possibly their least inspired one to date. Titled Gimme Gold! Megaways, it's a game that takes more than a few cues from Blueprint Gaming's gold mining themed slot Diamond Mine Megaways, which incidentally was the first non-BTG Megaways release. The unusual thing is that both of the slots mentioned offer more or less the same features, gameplay, and visuals. If you'd only played these two games, you'd be forgiven for thinking no Megaways innovation had taken place during the intervening years. All of the mandatory features are here, from mystery symbols, to free spins with an unlimited multiplier. A new betting option slightly mixes things up, but it's all pretty predictable aside from this minor tweak. 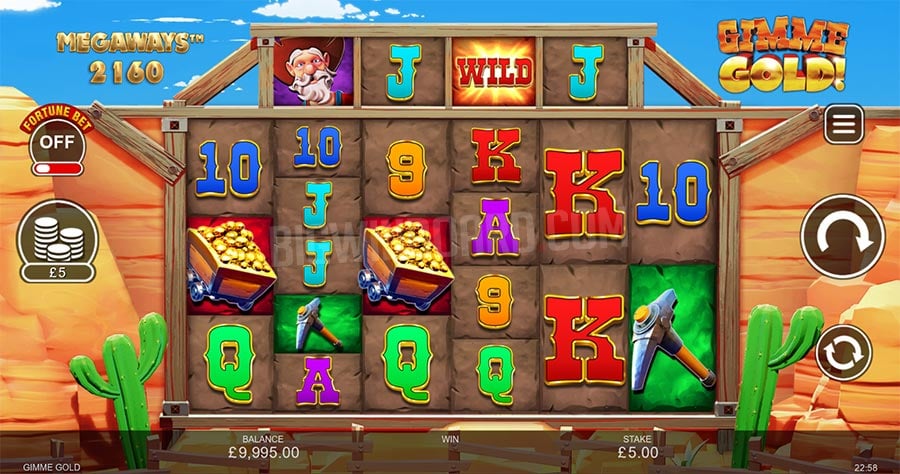 Gimme Gold! Megaways is played using a traditional Megaways setup made up of 6 main reels and a 4 symbol horisontal extra row sitting up top. As you may be used to from other Megaways slots, 2 to 7 symbols may land randomly on the main reels, producing up to 117,749 ways to win at full capacity. The grid sits in a canyon environment, surrounded by cacti, rickety wooden support beams, while clouds pass briskly across the sky – it looks pretty windy out there. Occasionally a banjo blast lights up a win or free spins, and explosions pop when winning combinations are removed from the board. Like the rest of the game, Gimme Gold! Megaways is stock standard stuff aesthetically that is either homely or dismissably unoriginal depending on your mood.

Available on all devices, Gimme Gold! Megaways allows base bets from 20 p/c to £/€10 per spin. We say base bet because there is also a Fortune Bet function, which increases the stake by 50% when activated. The benefit of doing so is an increased chance of winning free spins due to more bonus symbols being present in the base game. Highly volatile, Gimme Gold! Megaways comes with an RTP of 95.5%, a value that remains the same whether the Fortune Bet is active or not.

Winning combinations are formed when 3 to 6 matching symbols land adjacently from the leftmost reel. One exception is the prospector symbol (gotta have one of those) which pays out when 2 or more land. He's worth the most by far at 50x the bet for six of a kind, followed by gold carts, picks, and shovels making up the premium bunch - 6 of a kind wins for those three are worth 2-7.5x the bet. Making up the numbers at the bottom end of the table are 9-A symbols, designed in a classic Western-style font. One more symbol for this section before we delve into the features is the explosion wild which appears only on the upper reel, substituting anything except the bonus symbol.

Inspired didn't exactly use Gimme Gold! Megaways to showcase their creativity. Central to the action is the cascade feature triggered by every winning combination. Winning symbols are replaced by new symbols, which can create new winning combinations. Cascades continue to pile up coins until no new wins appear, then the next spin takes place.

The game also includes mystery symbols which may land in any position, appearing as a bundle of dynamite sticks. All mystery symbols in view change into one of the regular pay symbols at random, thus increasing the chance of winning big.

In the base game, 4 or more barrel scatters anywhere on the reels award the free spins game - each additional scatter awards +2 free spins up to a maximum of 80. Free spins come with a win multiplier which starts at x1, with each winning cascade increasing it by 1. During the bonus round, scatters only appear on the top reel. Land 3 or 4 scatters here to win +5 or +10 additional free spins.

There is actually one more extra, a technical one called Spin Chance. It triggers automatically when your balance drops below the current spin cost, yet is still above zero. Basically, players get the chance to wager their remaining credit at the current bet level.

Compared to what Inspired has done with past Megaways slots, Gimme Gold comes across as their least inventive to date. The only notable difference is the Fortune Bet option, and since it doesn't raise RTP or doesn't really tell you anything about the statistical benefits, some may question its value. It is hard to gauge Fortune Bet's effectiveness since free spins trigger so arbitrarily. There is no reason to doubt the claim though, so if extra bonus symbols justify the 50% stake increase, then it's probably worth it for you. The rest of the game operates as predictably as you might expect. One possible reason to pause is that mining Megaways slots can be found with higher RTP levels elsewhere. However, there should be no qualms about Gimme Gold's potential, which has a win cap of £250,000.

Despite their name, Gimme Gold! Megaways isn't the most inspired Megaways slot to come from the studio. It's missing the cute extras of Centurion Megaways or the grit of their Megaways debut Desperados Wild. It makes you wonder why they went so completely conventional for Gimme Gold then. There are loads of these 'starter pack' Megaways slots on the market already, did we really need another one? Not that extra choice is necessarily a bad thing, but since Inspired has shown how creative they can be with Megaways in the past, Gimme Gold feels like a major step sideways. The game might have been more enticing if they'd done the Desperados Wild thing and given players free spins options when triggered. As it stands, they did not, so what's leftover is a jolly enough game that is restricted to offering all the thrills of a regular Megaways slot, and little else.

Gimme Gold! Megaways is a run of the mill Megaways offering, which does nothing wrong, but ends up being nothing more than a shelf filler of a game. 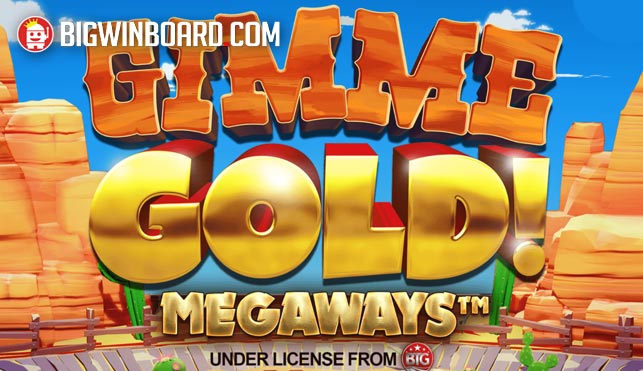