Demo play is not available in your region. Please visit one of the casinos listed below for free play.
NetEnt

✅ Play Jungle Spirit: Call of the Wild on

Jungle Spirit: Call of the Wild is a realm where wildlife populates the reels, and 'danger lurks behind every tree' - NetEnt's words, not ours. Along with the peril, Jungle Spirit is also an immersive game with some great features and a twist or two lurking in the dark. It starts with the visuals. Jungle Spirit is a gorgeous game. Part of NetEnt's fame has come from its lush visuals and Jungle Spirit is another strong example of their graphical talent. The name is a bit of a giveaway as the game is set in deepest, darkest, jungle bursting at the seams with wildlife. Along with the beasts is a wide range of plant life, with the grid draped in multi-hued flowers and hanging foliage. 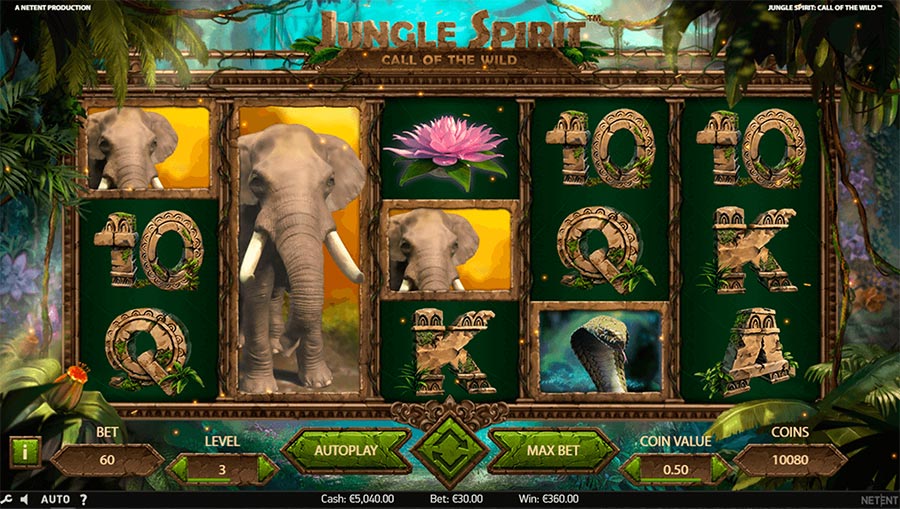 Player's ears don't miss out either with a drum track and cacophony of animal noises thickening up the experience. Wild by name, wild by nature means a high volatility level which will suit brave explorers, though the above-average RTP of 96.47% is a stat any player can get behind.

The game grid itself is kind of interesting though it might not appear that way, to begin with. During the base game, players spin 5 reels, with 3 rows and 243 ways to win – a set up that expands during the bonus game as you will see. For now, the goal is landing three or matching symbols consecutively in any row from the first reel onwards.

Playable from 20 p/c up to £/€100 per spin, symbols making up the paytable are no less impressive than the rest of the game is. Even the 10-A low pay royals have been designed in a stone covered in creeping ivy look like a forgotten corner of Angkor Wat. The game literally comes to life via the premium symbols which include cobras, crocs, bears, elephants, and tigers.

Premiums appear in 1x1 tile size but can be expanded, and as to premium values, five of a kinds range from 3 times to 7.5 times the stake. Interestingly, there is no wild symbol, although with the way the features work, you won't even miss them.

So no wild symbols. But there is plenty stashed away in the features department to make up for any shortcomings. One that can appear during the base and bonus game is the Symbol Expansion feature. Any symbol in the game, except the scatter, may be marked by butterflies which land at random. If a marked symbol is part of a winning combination, it expands to cover a full reel and increase the win value.

Butterflies also appear with the Butterfly Boost feature which is activated randomly in the main game when a winner appears. Here butterflies waft around and expand 1 to 3 of the winning symbols to cover their respective reels and power up the payout.

The highlight is the Free Spins game which is triggered when 3 or more flower scatter symbols land. If 4 or 5 scatters trigger the feature, then players benefit from an additional win of 15x or 50x the stake respectively. During free spins, the grid expands to 5x4 size, which not only adds another row, but increases the bet ways up to 1,024. Before the bonus game kicks off, however, players choose 1 of 5 options that range from low to high risk:

The animal chosen then becomes the only premium symbol that will appear during the round. The options with less free spins are higher risk/higher reward, while those with more spins have lower risk and lower potential rewards. Keep in mind too that free spins cannot be retriggered.

Every top team goes through a dry spell now and then and Jungle Spirit certainly cleared the slate after a spate of so-so releases. In fact, Jungle Spirit more than just clears the way, it comes darting out of nowhere like, well, one of the rabid animals in the game.

The animals themselves provide a lot of the game's appeal and are not only well-drawn, but come roaring to life via some slick animations. The whole jungle theme has been expertly dealt with and is another example of NetEnt's top graphic and sound talent.

Jungle Spirit showcases another aspect of NetEnt's development chops via its features. Symbol Expansions and Butterfly Boosts keep the base game interesting. When those glowing little butterflies appear anticipation builds nicely over where they are going to land.

The free spins have also been excellently designed and provide hardcore gamblers with a kick via the high volatility option. Those looking to stretch their gambling dollar with the low volatility choice. So does fortune favour the brave in this jungle? Can do, with solid potential during the base game of up to 1,822 time the stake, ramped up to 7,768 times the stake during free spins.

All up, Jungle Spirit: Call of the Wild is a solid slot from the creative chaps at NetEnt that has become one of the most popular titles ever released by the studio. Its base game cruises nicely while the base game comes with options that will satisfy most gambling approaches – you can even change the soundtrack if you like. Dress it all up in the stunning visuals and you have a highly entertaining slot on your hands.

NetEnt’s Jungle Spirit covers all basis in a slot heavy on atmosphere, potential, and enough bonus game options to satisfy most player requirements. 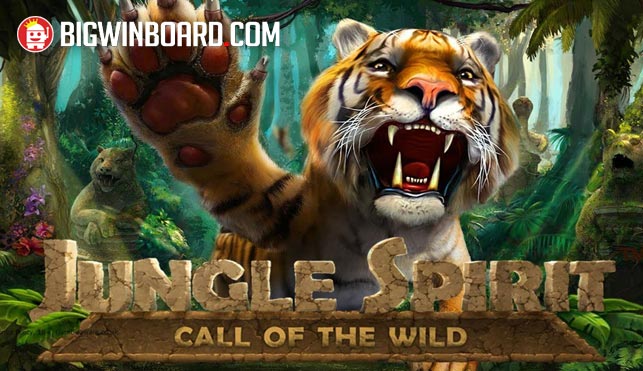