Developer Dreamtech Gaming takes a break from designing fantasy games to throw a few shapes at the local disco in their EDM-themed release, Lotsa Lines. Powered by Yggdrasil Gaming, Lotsa Lines brought to mind a cut-price version of their Neon Rush Splitz game, though a less refined or interesting version. It also awoke memories of NetEnt’s classic Starburst, if Starburst went back in time to an early 90s rave. The kind of shindig you’d feel a bit self-conscious to be seen at due to the budget lighting, décor, and DJ. Actually, the music isn’t too bad for a bit of generic EDM. Dreamtech usually design games with fantasy themes, so let’s not get too critical straightaway about a studio valiantly attempting something they wouldn’t normally do.

Lotsa Lines’ action taking place on a 5×5 sized game grid surrounded by a light show and some sort of star night constellation thing. As to pay lines, yes, there are lots of them. The amount alternates on each spin, and you can keep track of them since the active number is lit up on the reel set’s frame. In the base game, this could be anywhere from 25 to 200 active at once or up to 500 paylines in the bonus game. For players who like to inspect every single detail about a game, the paytable lists each payline so you can double-check to make sure you aren’t missing any hits.

Stakes from 25 p/c to £/€50 per spin may be set on any device, while the theoretical return value is 96.01%. There might be lots of lines, but the game’s hit rate is a pretty standard 1 win every 2.6 spins, hypothetically speaking. Gaining access to even more lines in the free spins bonus game occurs every 162 spins on average, while the action is governed by a medium volatile math model.

Dreamtech has used 9-A card icons as the low-paying symbols and 4 cuboid objects to reinforce the futuristic theme as the high-pays. At least three of the same symbol type is needed to form a win, and landing a line of five premium symbols is worth a payout of 3 to 12 times your stake. Starazoid shapes are wild symbols, landing on all five reels to replace any pay symbol type. It is possible to land combinations of wild symbols as well, where five of a kind will get you a win worth 20 times your stake. 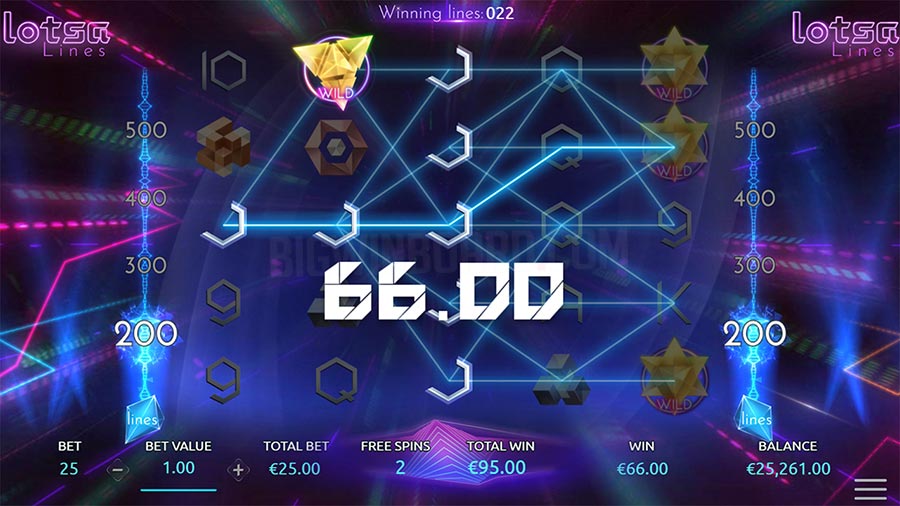 Lotsa Lines’ features are pretty basic, including another vague nod towards Starburst. Landing one or more wilds on the middle reels is all it takes to trigger a Wild Respin. Any wild symbol in view is locked in place while every other position respins. On respins, only blank spaces or wild symbols may appear. If a new wild symbol lands, another respin is awarded, and the process repeats until no new wild symbols land, then a win evaluation takes place.

The last symbol of note is the scatter, which appears in any position – 3 or more on the reels awards 12 free spins. During the Lotsa Lines Free Games feature the number of lines increases to 200, 300, 400, or 500. The bonus game can be retriggered if 3 or more scatters appear on a free spins.

Good on Dreamtech for stepping outside their comfort zone in an attempt at creating something eye-catching. Ultimately though, Lotsa Lines failed to fully ignite the need to get up and cut a rug. The team is used to flamboyantly portraying fantasy themes, so it must have been tough to rein in that natural tendency to design futuristic minimalism. The compromise was to go wild with paylines since the visuals were toned down, resulting in a game that wrestles between being big and small at the same time.

As the name suggests, Lotsa Lines does provide players with a fair few lines, but the term ‘lotsa’ is a subjective one. Maybe once upon a time, 500 paylines would have been impressive; however, in this day and age, that number of ways to win is a rounding error. Compared to a game like Nitropolis 2, which admittedly is an extreme example, Lotsa Line doesn’t have many at all. Other than as a catchy bit of marketing, you have to wonder why Dreamtech bothered with 500 paylines anyway when they could have piled on a pay all-ways system.

Perhaps players who refuse to move on from a fixed payline format to more contemporary all ways systems might be impressed. For others, the whole game, its music, and lines feel state of the art – a few years ago. You can see what Dreamtech were angling for, yet it is like going to a dance party and finding out the ‘DJ’ is an iPod on shuffle hooked up to a sound system. Sure, you can boogie to it, but it feels a little hollow. In keeping with the dance floor analogy, after a while of playing Lotsa Lines, you get those end of the night vibes where the music has gone from being amping to irritatingly repetitive, and you have to push yourself to stay focused. Even potential fails to excite, and all those 500 paylines at full a power return the so-so amount of 3,500 times the stake.

All up, Lotsa Lines might be an entertaining aside for players hooked on larger than normal fixed paylines in a modern setting. If so, then try not to expect the party of the century, and you could very well enjoy your time.

Lotsa Lines is the sort of dance party you’d grudgingly bop to if you were denied entry from better venues.