When author Ian Fleming created the character of James Bond, he wanted the name of the secret agent to be “as mundane as possible”. Whilst searching for inspiration, a bird-watching book written by ornithologist Dr James Bond caught Fleming's attention, and the rest is history as they say. One would think that an avid gambler and agent hero like James Bond would serve as inspiration for countless of great slots, but that is really not the case. Instead, the world of iGaming is dominated by Indiana Jones wannabes and mysterious worlds.

Swedish provider Play'n GO has taken us to many fascinating places throughout the years, but in Mission Cash we get to cock our golden guns for the first time and engage in some espionage action. High variance, this 5-reel, 20-payline offering has Play'n GO written all over it (and a hint of other providers as you will see). It comes with wild reels and re-spins that activate when the wandering crosshair locks on one of two agents. It all intensifies in the free spins round where the odds of triggering the very same features are significantly increased. Playable across all devices from 0.20 to €/£100 per spin, the game is shipped to the casinos with a default RTP-setting of 96.65% which can be lowered by the operator to 94.49% or less.

Inspired by 60s era agent movies, Mission Cash is set inside a control center filled with bleeping computers and strange gadgets that covers the room in a green tint. Featuring comic book style graphics, you'll see the usual lower-value card suits spinning on the reels along with 4 secret agent characters - Agent Blue, Red, Green and Purple. The latter is the most lucrative, giving you 50 times your stake for five across a full payline.

During gameplay, you'll see a crosshair move around and land on a random position on the reels. This occurs on every spin. If the crosshair locks onto a blue or red agent symbol, it will transform into a wild and expand to fully cover the reel, thus triggering the Take a Shot Re-Spin feature. The fully stacked wild is then held in position while a respin is played, giving you a chance to land additional crosshairs and wild reels. This continues until either all reels are covered with wilds or the crosshair fails to lock onto the two previously mentioned agents.

Look out for the sound suppressor firearm scatter. When the crosshair lands on this symbol, the Free Spins feature comes into play with 8 spins. Once in, your chances of triggering the Take a Shot Re-Spin feature is now doubled as it's now also triggered by the green and purple agents. You can also retrigger the free spins round with 8 extra spins if the crosshair lands on a scatter.

For those of you who have played Yggdrasil Gaming's 2017 release Reptoids, it will be quite obvious where the inspiration for Mission Cash came from. Although there are some similarities, such as the retro theme and the way you trigger the free spins, Mission Cash is far from a clone and is played using a completely different mechanic. While Reptoids is visually superior, Mission Cash comes out on top thanks to its exciting features, higher volatility and, more importantly, better potential. If you get all reels to transform into fully stacked wilds, you'll trigger the maximum payout of 5000 times your stake.

Overall, Mission Cash is another solid game from Play'n GO that has everything needed to appeal to all sorts of players and gambling budgets as even on small stakes there's a chance to land massive wins. Watch out, though - high variance and fast-paced, Mission Cash might leave you shaken, stirred or anything in between.

The stylized presentation and captivating gameplay of Mission Cash make it too sweet to pass up. 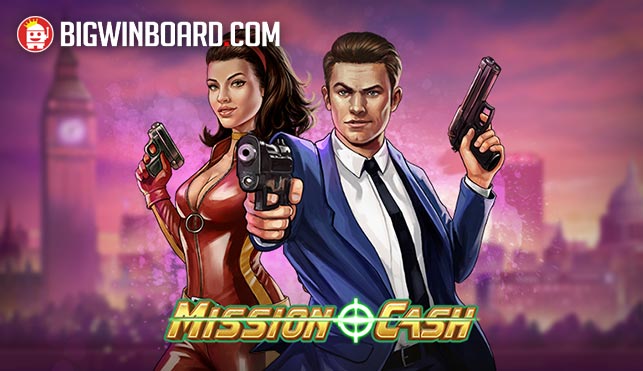