The cannons are loaded in Sea Hunter, a 3-reel video slot played across 5 fixed paylines featuring underwater creatures swimming in the ocean, ready to be targeted for explosive wins

Play'n GO are on the very frontier of providing us with innovative slots. Many of their recent releases are non traditional slots that don't even feature bonuses and instead play more like video games, but that doesn't mean it lacks in excitement. But as always with innovative and new creations, some will embrace the new while more conservative players will likely shrug.

Sea Hunter has quite an abstract theme and the style somewhat resembles another Play'n GO slot Eye of the Kraken. It plays out in the ocean with what almost seems to be alien underwater creatures mixed with Finding Nemo style fishes. Along with this you got this chill elevator techno kind of beat going on in the background.

The gameplay itself is smooth, and kind of relaxing to be honest and despite being a high varience slot it seemed to work quite well as a wagering slot, at least during our 2 hour test round.

Sea hunter is 3 reel video slot played across 5 fixed paylines. It has an RTP of 96.6%, but like most of you know by now Play'n Go slots have adjustable RTP.

The premium symbols are made out of an Orca, Octopus, Manta Ray and a Turtle, with the Orca being the top premium symbol awarding you with a 15x win for 3 in a row. The highest valued symbol is however the wild which is worth 25x on a line. It is possible to get a full screen wilds on this game along with a multiplier of 15 which, if calculated correctly, means the slot has a max win potential of 1875x on a single spin.

Instead of traditional scatter symbols and bonus rounds, this slot has a sort of progress thing going on very much like in their recent releases Reactoonz and Moon Princess. Unlike those two games however, this one is a bit easier to understand and grasp straight out of the box.

There are 4 feature stages and it takes 2 consecutive wins to load the first stage of the cannon called Growth Gun. This is how Play'n GO explains the different stages:

Growth Gun: Requires two consecutive wins. On the next spin, the cannons will shoot at one random type of symbol. All matching symbols will then be upgraded to the next symbol in the paytable. Winnings will then be calculated. The Wild symbol will never be chosen and cannot be upgraded.

Sticky Shot: Requires four consecutive wins. The cannons will shoot at one random type of symbol. All matching symbols, including any Wilds, will remain sticky and one free re-spin is then awarded. The meter will not reset on a losing re-spin, but will increase by one if the re-spin results in a win.

Wild Warhead: Requires five consecutive wins. On the next spin, between one and three wild symbols will be placed in random locations anywhere on the reels.

Multiply Mortar: Requires six consecutive wins. The player is awarded one free Win Spin where a guaranteed win is awarded. The cannons will then shoot the reels to multiply the win by a random amount, up to a maximum of x15! 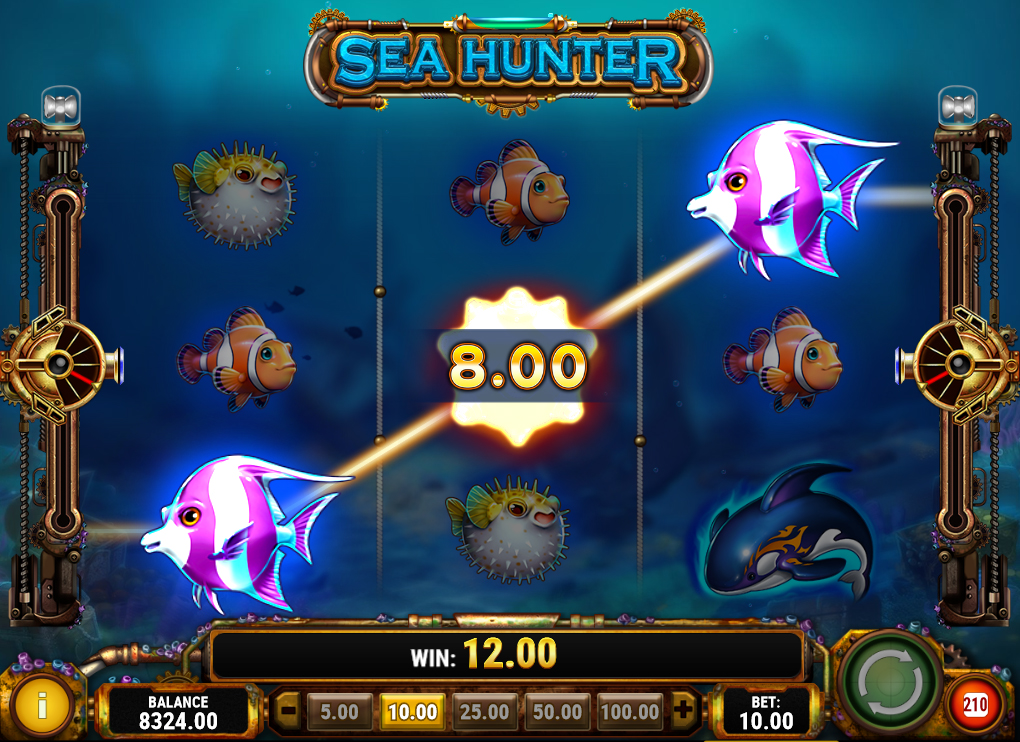 The game is stated by the provider to be a very high variance slot, and while it seems to have decent potential we can't really see it having the kind of potential like Book of Dead for example. The single max win potential in itself is not that amazing, but after playing through all the features it can possibly get up to the 2-3000x area.

In our opinion this is one of the better recent releases by PnG, much because it's not as complicated as the other ones. It's easy to get your head around and the slot works quite well for wagering too. The production is very nice with smooth game play and great looks. We must admit that the music seems a bit out of place. We had to check first if we had Spotify running in the background. But it works well and will work specifically well in casino streams we believe.

Sea Hunter is available across across all Play'n GO casinos, including Highroller, Videoslots and Casilando.