Ever wondered where humanity might possibly be going and where it's come from? If so, Stakelogic has stepped in to attempt an answer to the latter part of the question, sort of. Well, the studio has made an online slot titled Origins, set in a prehistoric time when everything seemed to be made of rocks, stones, or bones and when dinosaurs rubbed shoulders with our early bipedal ancestors. This never actually happened, according to science, so Origins obviously plays it loose with the truth in a charming retelling of the distant past.

Humans and prehistoric creatures chilling out together is a fairly common trope in popular culture, made big thanks to movies like The Croods or Ice Age. Origins, then, is in good company as it recreates a bygone age, full of cavemen, cavewomen, crude weaponry, dinos, and mysterious carvings. The vibe is light, without a hint of the dangerous knife edge of survival life surely must have been like at times back then. No heaters, no cars, no internet, darn, its amazing humankind lasted down to the present day when you think about it. We aren't the biggest or the strongest, yet here we are. Makes you wonder, if scientific thought is correct, exactly how a curious bunch of primates ended up at the top of the food chain. From hunting and gathering to landing people on the moon and creating virtual worlds, worlds which literally aren't real. The mind bends under the weight of the sequence of events that led to the current gulf between us and the rest of the animal kingdom.

Origins doesn't really concern itself with the hows or whys, preferring to use prehistoric visuals for comedic effect. The result is a charming game, played on a 5x3 grid in combination with 243 ways to win. Utilising a medium/high volatile math model, it comes with a theoretical payback value of 96%, presumably staying the same when using the Super Stake or buying free spins. The Super Stake doubles the regular stake (20 p/c to £/€20), thereby doubling the chances of triggering free spins and the Super Hold feature.

Pay symbols form wins when matching tiles land from the leftmost side across at least three consecutive reels. There are nine of them, starting with knives, clubs, spears, axes, and bones as the low pays, then a child, a lady, a man, and an older gent as the four high pay character symbols. A five-of-a-kind winning way awards 1-2.5x the bet for the lows and 5-50x the bet for the highs. Also available on reels 2 to 5 are the wild symbols, able to substitute for all symbols except the scatter or collector.

While tooling around in Origins' past, keep an eye out for its features, namely Super Hold and free spins with chosen symbols, collector symbols, and a collection bar.

Landing 3, 4, or 5 scatter symbols triggers the free spins bonus round with 10, 15, or 20 free spins, respectively. Before they start, one regular symbol is randomly selected to be the chosen symbol. Chosen symbols land displaying money values, though they can still be used for ways wins. If a collector symbol lands at the same time as chosen symbols, their values are awarded.

While it doesn't exactly shine a light on how humanity pulled itself up by the bootstraps to colonise the earth, Origins presents a pretty fun what-if scenario of the past. It's a cute game with an affable quality that doesn't take much effort to get along with. Ever since shows like The Flintstones, or perhaps earlier, the idea of cavepeople mingling with dinosaurs has camped out in the popular imagination and, amongst other things, provides fun subject matter to fill an online slot with.

Once the initial warmth has subsided, Origins followed through with some decent gaming as well. Nothing extraordinary, but there are opportunities here for thrills. The most thrilling during testing was actually the Super Hold feature, which did a good job of covering much of the grid with Super Hold symbols, both regular and split, before awarding a satisfying payout. It did not trigger a huge amount, but knowing it was there injected some motivation to keep going. Free spins weren't bad, either. Money symbol collection features are hot, and collecting the collector symbol, as in Big Bass Bonanza, is pretty darn balmy as well. Like the Super Hold feature, a collection element's been wedged into Origins, complementing its action.

One of Origin's biggest revelations was its winning potential, capped at 20,000 times the bet in the base and bonus game. From what happened during our sessions, that figure did feel ridiculously optimistic. Obviously, such high advertised max win is used to entice undecided players in for a spin, should Origin's look and thought-provoking topic not be enough.

If you can look past Origins’ quirks, there’s a fairly charming game here to discover. 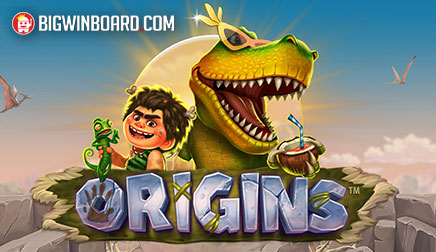