NetEnt owned developer Red Tiger has sifted through their back catalogue and pulled up the slightly older slot Rainbow Jackpots for a remake. Well, it’s not that old. The original was released in 2016 and proved a hit for players who like their slots, lite, green and soaked in Guinness. The Irish themed game returns with its features and stats more or less intact but with a major overhaul to its mechanics. It uses a new system called Power Lines which, similar to their earlier experiments with the Power Reels mechanic, alters the grid on every spin. That aspect of the game might be fresh, too bad the rest of it couldn’t have followed suit.

Fans of the first Rainbow Jackpots will instantly feel at home with the new version. A similarly carved structure frames the grid, and the same pipe smoking leprechaun returns to modify spins from time to time. The background is filled with the rolling Irish hills and a cheerful ditty completes the atmosphere. It’s homely and familiar, if not original. To get started, setting a stake is in order and players can choose from 10 p/c up to £/€100 per spin. Low roller fans of the first will be happy to see that the minimum bet level has been decreased. Unfortunately, so has the RTP which has dropped nearly half a percentage point to 95.68%. Other key stats include the potential which has sort of stayed constant, hit rate is up to 3/5, and volatility remains the same at 4 out of 5.

The setup might have expanded, but the same basic rules apply. That is, land 3 or more of a kind on a payline for a reward. There are now 6 reels to do so which allows for bigger combos, and there can be anything from 2 to 7 rows on each reel which mixes it up further. The grid changes constantly and those 2 to 7 rows provide between 4 to 49 win ways respectively.

Symbols used on the paytable are the same but vary slightly in appearance. Players get 10 – A royals in a colourful Celtic font, and three premiums - a top hat, a lucky horseshoe, and a golden shamrock. Despite the setup expansion, the potential remains about what it was before. To compensate the extra rows, reels, and win ways, Red Tiger has dropped the value of the symbols. The Golden Shamrock, the most valuable symbol, is now worth 8 times the stake for six of a kind, compared to 24 times the stake for five on the original. The wild trumps that though at 15 times the stake for six, and it also substitutes for any of the regular pay symbols.

Running alongside Power Lines are most of the same features from the original. Many are triggered at random when the helpful leprechaun appears with his magical pipe. These are called Lucky Leprechaun features and he provides randomly triggered Symbol Swaps and Super Symbol Swaps. A Symbol Swap is activated by the leprechaun blowing a high pay symbol onto the reels from his pipe. This leads to that chosen symbol raining down onto the reels for a guaranteed win. Super Symbol Swap is the same, but instead of regular-sized symbols, it rains down super-sized symbols from 2x2 to 6x6.

Just like Symbol Swaps, the Free Spins come in two forms. The first is the standard round which is triggered when 3 scatter symbols land anywhere in view. Occasionally, if 2 scatters land, then the Lucky Leprechaun’s pipe may blow an extra scatter onto the reels to trigger the feature. During free spins, there is an increased chance of Symbol Swap feature and more free spins being activated.

In some ways the Power Lines version is an enhancement, in many ways, it’s more of the same. There might be extra rows, reels, and win ways, but the result only really suits hardcore fans of the first one (if there are any left). The Power Lines version just doesn’t have much new to offer. It doesn't enhance the overall gaming experience even close to the same way Megaways manages to do for example. Having said that, if you go back and play the original it does feel a lot more restrictive and claustrophobic.

Another issue is that aside from free spins and Symbol Swaps, the other features are insanely hard to trigger. This point leads to the thorny question of potential. The paytable mentions a max win potential of just 1,224 times the stake which is far too low to cater to anyone but those who are happy to play anything that may 'look fun'. Let’s take a full grid of the shamrock symbols as an interesting example. With the original, that combo is worth 480x the stake. The kicker is that only a full 6x6 grid of the Power Lines version is worth more. Every other grid configuration will return less. Sure, it might be easier to fill a 6x2 grid, but it’s just something to keep in mind if you are considering firing up the remake.

All up, while the Power Lines feature adds a bit of interest, the rest of the stats and rewards have pretty much stayed static or stagnated which seriously detracts from the game’s appeal.

Rainbow Jackpots might have received an upgrade and expansion but the extra rows and reels can’t hide the same minnow of a game. 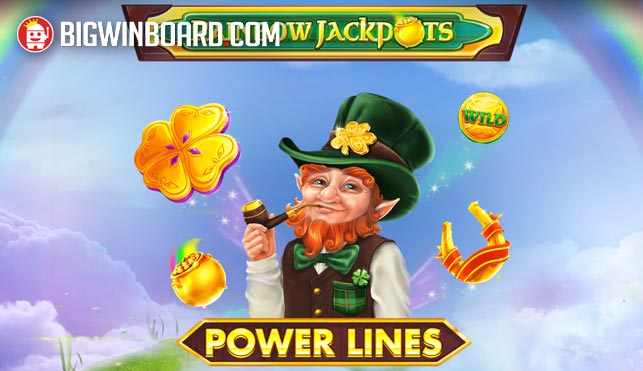