Demo play is not available in your region. Please visit one of the casinos listed below for free play.
Inspired

Reel King fans, your man returns, this time in undead form, to star in Inspired Gaming's online slot Reel Spooky King Megaways. Obviously, it's not going to be very spooky; we all know that, but the title refers to a Reel King Halloween makeover. The Reel King franchise raises all sorts of questions, such as why the King has been recast as a pale-faced vampire in a slot based on a relatively less prevalent (though growing) seasonal event? Sometimes it's better to float along with these things rather than query them.

Peruse the paytable, and it quickly becomes clear Inspired has essentially cloned the previous game, Reel King Megaways, for the Halloween version. Aside from an RTP decrease and a theme shift, everything else is the same. Let's deal with the theme first, and yes, it is Halloweeny, in a cute Reel King way. Skulls, pumpkins, and ghosts abound in a full moonlit, haunted house on a hill environment. One of Reel Spooky King Megaways' biggest surprises was a Halloween style soundtrack, which is sweeping and keeping with the theme but might feel out of place in a Reel King game for some players. 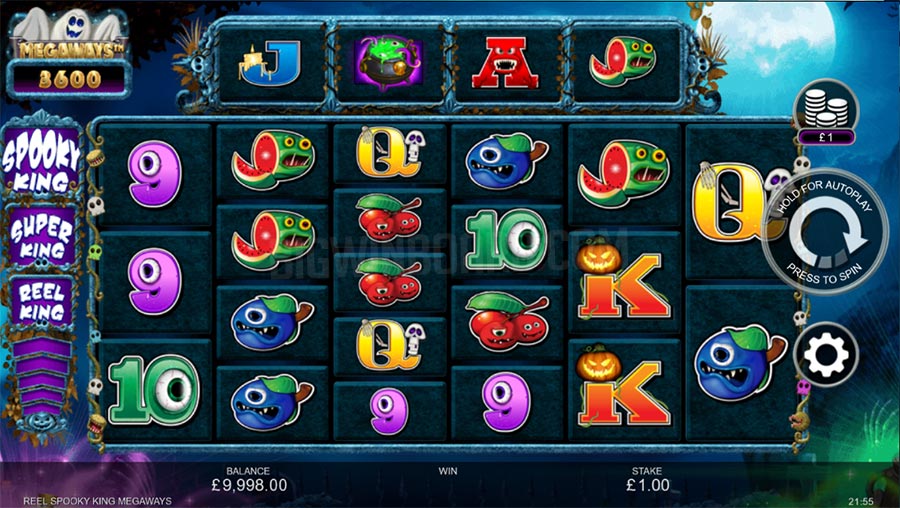 As before, a traditional Megaways 6-reel panel holding up to 7 symbols on each reel, plus a 4-symbol upper reel, is utilised. This setup alternates ways to win, up to 117,649 at the most. Medium volatile, the game produces a theoretical return value of 95.56%, which is a tad down from the previous Megaways game the Reel King was in. Playable on any device, users may select bets from 20 p/c to £/€20 per spin.

Landing matching symbols across adjacent reels starting from the left-hand side of the grid achieves a win. The cauldron symbol is the most valuable at 50x the bet for six of a kind, followed by A to 9 royals, then critterish watermelons, plums, and cherries. Wild witch-hats appear on the four-cell upper reel to replace any pay symbol in the base game or free spins. 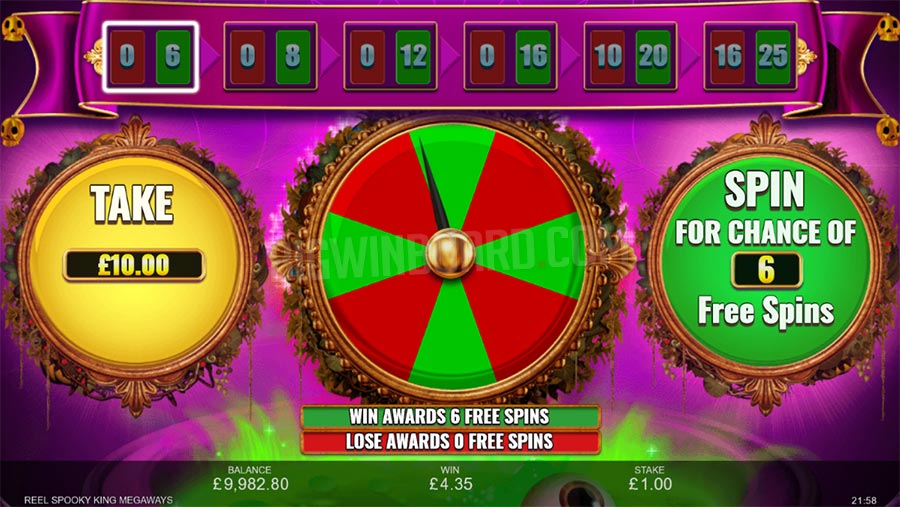 During the base game and free spins, each winning combination is part of a win chain reaction. Winning symbols get removed from the board, allowing new ones to replace them from above on the reels. These cascades keep going as long as consecutive wins keep hitting. When no new win appears, the feature ends.

In the base game, 0-6 reels light up yellow from left to right with a 'ding' sound. One extra reel is lit yellow for each subsequent cascade and achieving 6 yellow reels triggers the Reel King feature. One further cascade past six will trigger the Super King feature, while one or more from here triggers the Spooky King feature.

If the Reel King, Super King, or Spooky King feature has been triggered, then 1-2, 2-3, or 3-6 mini-slots appear over the reels, respectively. Each mini slot has a single payline and lands paying pumpkin symbols or blanks. Mini slots also have lit reels, and if all 3 reels are lit, then players move along a Free Spins Trail. If a mini slot produces a losing spin, and there are less than 3 lit reels in it, it disappears. The feature ends when there are no more mini-slots in view. If a free spins position has been reached when this happens, the Reel Spooky King Free Spins bonus is triggered.

Before starting free spins, players can choose to gamble what they have won on a wheel divided into red and green segments. Landing on a green segment awards more free spins up to 25; landing on red one reduces the number of free spins, in some cases to zero.

Free spins come with an unlimited win multiplier that increases by 1 following a winning cascade. Also, each cascade lights one reel red consecutively from left to right, starting at the leftmost reel. Red reels remain lit until the 6th reel is reached, then the number of free spins is increased by 1, 2, or 3, and the current multiplier is increased by 0, 1, 2, or 3.

The Spin Chance automatically triggers if your balance falls below the current spin cost yet is greater than zero. It gives you the chance of having one more yolo spin with your remaining balance at the current stake level. If you select yes, a wheel turns, and if successful, the spin commences. If unsuccessful, the balance is hoovered up by the game.

From a business standpoint, a Halloween clone makes sense as a way of cashing in on a recognisable brand and squeezing a few extra pennies out of it. It is an interesting choice since Halloween isn't as popular in Europe as it is in North America, though it seems to be gaining traction. Perhaps interest has accelerated because of the internet and the American youths dressing up to show the rest of the world how to get free candy. Who knows, in a few years, Halloween might be even bigger in Europe than the US, seeing as a stronger left-leaning, socialistic spirit pervades. Or so the saying goes.

On to Reel Spooky King Megaways, well, it's just the same as Reel King Megaways with a couple of alterations. There's the Halloween theme now, instead of the standard King thing going on. The new look makes a change from the white reeled, plain background, pretending you're at the pub vibe Reel King Megaways gave off. Though that was half the charm for a lot of people, presumably. Another potential turnoff is you can't mute the soundtrack without muting all the sounds in the game, which might be a nuisance for some players. You're stuck listening to music plus the bleeps, or you listen to nothing. A minor detail but the music kind of gets in the way of pretending you're down the boozer playing an old school classic. And switching off the sound means losing the 'dings'.

The other bummer is the reduced RTP value from the previous one's 96.23% to the less wholesome 95.56%. It's one of those drops that probably isn't large enough to completely put off the target audience, though it is disappointing all the same. What can you say? Reel Spooky King Megaway is like playing the previous Megaways one, apart from the pesky return value drop and the theme change. As always, anything involving the Reel King is one for the fans of this sort of retro-style gaming, but even then, you wonder how they will take to this. It's nice to see the King branch off and try something new, yet are the theme changes enough to turn fans off? Interesting to see. From Megaways to Halloween, what's next on the Reel King's journey of personal development?

The Vampire getup might be a new look for the Reel King, but the rest of the game is a virtual clone of Reel King Megaways, though with some serious disadvantages. 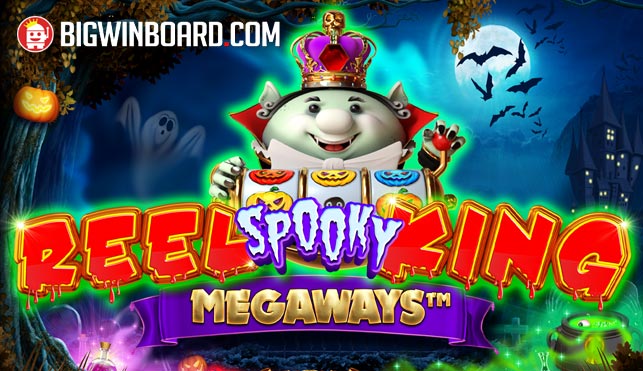