Demo play is not available in your region. Please visit one of the casinos listed below for free play.
Inspired

Developer Inspired Gaming keeps the Reel King franchise rolling by cloning Reel King Megaways in an attempt to cash in on the holiday season. Santa King Megways really is a case of how you feel about the original since they are almost exactly the same. All that sets them apart are a few minor cosmetic changes, an RTP drop, and a track change. If you can't get enough of the seemingly omnipresent King, here he is shimmied into a Santa costume just in time for Christmas. 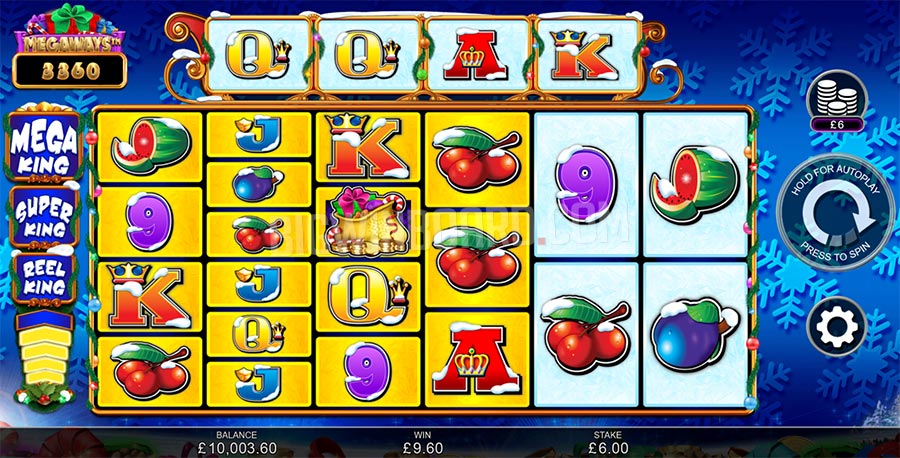 The action occurs on a Megaways grid comprised of 6 main reels, and a bonus reel running horizontally along the top. On each spin 2-7 symbols land on the main reels, while 4 appear on the tracker. At full whack, this set up produces 117,649 ways to win. Winning occurs when 2 or 3, identical symbols land adjacently from the leftmost reel.

As to the changes, well, there isn't a lot. Mainly it's a case of new wallpaper, plus the odd sprinkling of snow and Santa hats around the place. Oh, the music is different. Be on the lookout for Xmas hits like Jingle Bells and so on to get all Christmassy. Other than that, the King is back to his old tricks.

Playable on any device, Santa King Megaways offers bets ranging from 20 p/c to £/€20 per spin. Expect the same high volatility, made even more extreme by the gamble option during features. RTP has taken a knock from the original's 96.23%. Why? Santa's licensing fee? Entropy? Inspired feeling Grinchy? Whatever it is, Santa King Megaways produces a return to player rate of 95.56%.

As for the paytable, there are no hidden surprises. From low to high you'll find cherries, plums, watermelons, 9-A card symbols, as well as a Santa sack full of presents and coins. All need at least three to win, except the sack which needs only two. Landing 6 sacks in a line reaps a 50x win, while the rest payout from 0.8x to 7.5x for full line wins. The crown repeats its performance as the wild, appearing on the extra reel to replace any other pay symbol.

Since we are dealing with a whitewashed Christmas version, all of the features return in virtually the same form as before. Those who fear change will be chuffed to see Cascades, Lit Reels, the Reel King Feature, and a round of free spins.

Each win kicks off the Cascade feature which removes winning symbols from the board, allowing new ones to cascade down to fill in the newly created gaps. This can lead to more winning combinations, and the process repeats itself until a non-winning cascade occurs. Then the next spin takes place.

Lit Reels are an old school feature that made a comeback in the Megaways upgrade. In the main game, up to 6 reels can turn yellow on each spin. In addition, each cascade will light a reel yellow, and if all 6 change, play moves to the Reel King feature. One more cascade past that the Super King Feature, while yet one more sends players to the Mega King feature.

If so happens, at least one Reel King now appears over the reels spinning a one-line mini slot. It's a little hard to tell what's going on here at first if you've never seen it before. In a nutshell, if three coloured symbols land they award 1x, 2x, 5x, or 10x the bet. Also, these symbols may appear with a yellow background, if 3 land, the player moves along the Free Spins trail displayed across the top of the screen. The free spins trail and the number of Reel Kings active in the feature depends on which one was triggered:

When a losing combination lands on the mini-slot, with less than 3 lit reels, the respective Reel King disappears. The feature comes to an end when all Reel Kings are gone. If that happens, and players have won free spins from the trail, play moves to the next feature.

Free spins do not start straight away though. First, players are given the opportunity to gamble the amount awarded or collect. If gambled, a wheel spins which can either decrease spins down to zero, or award more up to 25. Hitting 'Take', or winning 25 free spins starts the bonus.

In free spins, a win multiplier comes into play, starting on x1, while each cascade increases it by +1, with no limit. Reels light up again too, this time in red following each cascade, from the leftmost reel. Neither the lit reels nor the multiplier reset between spins. If all 6 reels turn red, two scrolls spin, awarding 1-3 free spins and increasing the multiplier up to +3.

If players are only going to play a Christmas themed slot for five minutes at the end of the year, it's understandable developers aren't going to put a huge amount of time or resources into making them. Such is the case with Santa King Megaways which is such a close clone of Reel King Megaways - a slot that itself is not an overly original game. Most things have remained the same, aside from the snowflake wallpapering, a few Christmas ditties jingling away in the background, and the ponderous RTP decrease.

There's not a whole lot more you can add than that really since it's so similar to the previous one. If players are down with the whole Reel King phenomenon, and many are, there's nothing preventing them from having a ball playing the Xmas variety. Suffice to say if you're not a fan of the King, then spinning the Santa version is unlikely to do much to fill your stocking.

If the idea of Reel King Megaways in a Santa hat and reduced RTP gets you going, you love the Christmas edition. 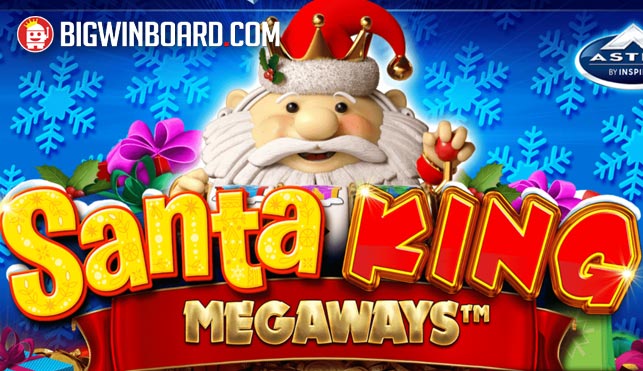