✅ Play The One Armed Bandit on

If, as a developer, you're going to create a western-themed slot, you should know that players are going to expect a few things, for the bar has been set by NetEnt's Dead or Alive and its sibling Dead or Alive 2. First and foremost, many players are going to expect massive potential. In a time when it was almost unheard of, NetEnt's Dead or Alive could deliver max wins of up to 10,000x - proven potential mind you, that players actually hit and not just claims made by the developer. With Dead or Alive 2, NetEnt knew they had to outdo themselves, which they did simply by bumping up the volatility and potential to ridiculous levels while still managing to maintain a certain degree of equilibrium. In any case, if anyone wants an example of how to get in the game without pulling a cloning stunt, Tombstone by tiny studio Nolimit City is one such great example.

Yggdrasil Gaming has covered many compelling themes throughout the years, but they've never actually headed out into the wild frontier before. It's not like they've never had the opportunity. For example, their smash hit Cazino Zeppelin was in fact heavily influenced by Dead or Alive, though instead of cowboys and outlaws, they decided to go with a steampunk theme while also adding a bit of a twist to the gameplay. The result was a truly unique and enticing game that has become one of the studio's biggest hits. Yggdrasil was never a provider to blatantly copy other people's work anyway.

In The One Armed Bandit, you finally get to experience the American frontier Yggdrasil's way. Highly volatile, it comes with a setup of 5 reels, 3 rows and 20 fixed paylines. This is not a particularly feature-heavy slot, but those on offer are all well considered. In the main game, landing individual scatter symbols will provide you with respins that can give you 5x multiplier wilds. The highlight is the free spins feature, where the multiplier value of the wild can increase to a staggering 20x, with potential for massive payouts. You can play The One Armed Bandit from as little as 10 cents to 40€ per spin.

The Yggdrasil design team rarely fails to deliver and belong to some of the most skilled in the industry. Set in a sleepy settlement somewhere in the wild west, and with a wooden gallows used as a frame for the reels, the game comes with quite a beautiful, and slightly emotional, soundtrack to set the mood. There's a total of 8 regular symbols included in the game. These are made up of 4 lower-value card suit symbols as well as more rewarding metal spurs, cowboy hats, liquor flasks and pistols. The latter is the most rewarding, giving you 80 times your stake for 5 on a full payline. Symbols do not appear stacked on the reels and there are no regular wilds available.

Whenever one or more bandit scatters hit in the main game, the Respin feature comes into play. A silver star will appear above any reel where the scatter lands and for each scatter that appears in view, a respin is rewarded. During the respin, scatter symbols on all the reels marked with a silver star are replaced with 5x multiplier wilds. For example, if you land a scatter symbol on reels 1 and 3, you'll get 2 respins with a chance to land 5x multiplier wilds on those two reels. If another scatter hits on reel 2 during the respin, you'll get 1+ respin as well as a chance to land 5x multiplier wilds on reels 1, 2, and 3.

If you manage to collect all 5 silver stars before you run out of respins, the Free Spins game is triggered (we found the bonus frequency to be around 150-250 spins). Starting with 10 free spins, any respins left over from the Respins feature will be added as additional free spins (14 at most). Once in, you'll benefit from a starting wild multiplier of 5x that can appear on all reels. Now, during the free spins round, if a bandit bonus symbol hits, you'll get 1+ spin while also moving you 1 step forward on the multiplier meter. Collecting 2 or 4 of them will upgrade your multiplier wild to 10x and 20x respectively. Any bandit bonus scatter that appears in view after you have activated the maximum 20x wild multiplier, will continue to reward you with an extra spin. In the free spins game, there's a chance to land wins of up to 8000 times your stake on a single payline (it appears that you cannot land a wild line as the payout would be enormous).

It may be useful to know that most reviews of The One Armed Bandit that have been appearing up until now have all been written by people (content writers) that have not actually played the game. Rushing to outrank their competitors, they rely on Yggdrasil's fact sheet to jump to conclusions with no opportunity to evaluate it hands on. In some cases, it becomes rather comical, like when a reviewer describes the music as 'quirky', merely guessing it has a Deliverance-inspired soundtrack, when in reality it's not even close.

Having actually played it ourselves, our opinion is that The One Armed Bandit is an all together appealing game that has all it takes to become a trending slot, possibly even a classic. It looks great, the gameplay is engaging throughout, and the potential is outstanding. Of course, it will have to prove itself once live, but there's no doubt in our minds that we're going to see some explosive wins on it. Keep in mind, The One Armed Bandit is a highly volatile game that will rob most people blind, but if you fear no outlaws, the wild west is at your feet.

If you’re looking for pure high variance action with breathtaking potential, Yggdrasil Gaming’s The One Armed Bandit most certainly fits the bill. 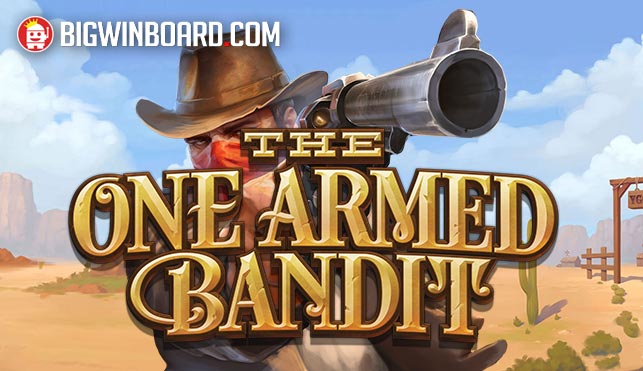