Demo play is not available in your region. Please visit one of the casinos listed below for free play.
Quickspin

One of the neat things developer Quickspin tends to do is lead off a game sheet or blurb with something humorous to break the ice and get you in the mood for what's to come. They've teed up Tiger's Glory Ultra by proposing the position of gladiator for players looking for a career change. In some ways it would be a pretty sweet deal; you don't have to work every weekday, there's plenty of glory if you can prove your worth, plus there's no being stuck behind a desk. Of course, downsides include a reduced life expectancy and no extra hazard pay.

Ferocious animals were one of the big dangers in the Roman Circuses of yore, and Quickspin has filled their slot Tiger's Glory Ultra with the stripy orange beasts. These ones aren't so bad, though, in fact, you'll want as many to appear as possible, especially during free spins where they become pay anywhere sticky symbols. If this all sounds familiar, it's because Quickspin released the first Tiger's Glory back in 2018 when they were transitioning from relatively 'soft' games to harder-edged stuff for the grizzlies. Like NetEnt's MAX range, Quickspin has taken the original and jacked just about every stat while keeping all the bits that players enjoyed before.

The studio has largely left the cosmetics untouched, so the gaming takes place on the same 6x4 grid, offering 4,096 ways to win. Before the action commences, players can elect to play in Classic mode (the same as before) or the juiced-up Ultra version. You'll know if you accidentally stumble into Ultra mode because the background image turns bright red, as if there's a major fire raging. A button-down at the bottom lets players toggle between Classic and Ultra mode as they so choose.

Once you've found your preferred mode, bet selection is next, where options range from 20 p/c to £/€100 per spin. Different engines drive the two modes where the Classic is rated as highly volatile and produces an RTP of 96.51%. Both attributes increase for the Ultra, where RTP now comes in at 96.72%. As before, any device is suitable for finding glory on the blood-soaked sands.

Players score a regular win when three or matching symbols land adjacent to each other, starting at the leftmost reel. No changes have been made to the paytable either where the same 9-A icons make up the low pays, followed by 4 gladiators and a tiger, the latter worth 10 times the stake for six of a kind. Wild symbols are up last and don't make a huge impact on the game. When they do show up, they replace any of the pay symbols to complete a win.

Tiger's Glory wasn't exactly overflowing with base game features, and Quickspin has done little to alter this for the Ultra version. Free spins remain the showpiece, triggered when 3, 4, 5, or 6 scatters symbols land to award 7, 10, 15, or 20 free spins.

In free spins, a change is made to the premium tiger symbol. As well as regular tiger symbols, it's possible Enraged Tiger symbols land as well – these have a red border to separate them from the normal gold ones. A mini battle plays out on Enraged Tiger symbols when they land between tiger and gladiator, and if the tiger wins the tussle, the symbol sticks to the reels for the rest of the feature. In addition, these sticky Enraged Tiger symbols pay in any position; they do not need to be adjacent or start from the first reel. In this way, if you have enough tiger symbols locked in place, they will create repeat wins on each following spin. Also, the first Enraged Tiger that wins its battle on each reel awards +1 additional free spin, up to +6 extra in total.

The previous paragraph describes the bonus game in Classic mode. If you're in Ultra mode, then tigers always win the battle, so Enraged Tiger symbols always stick when they hit.

Tiger's Glory was already a volatile, high potential game, and the Ultra version cranks that up to mind-bending proportions. They've kept the Classic mode, but it feels a little redundant when Ultra is a mere click away. For the Ultra conversion, it's as if Quickspin has selectively bred the original tiger to birth some exceptionally vicious hybrid or pumped the creature full of steroids, then starved it for a week. Basically, Ultra mode sends volatility and potential through the roof in a game that was already a beast.

This is most noticeable during free spins where, if Enraged Tigers hit in numbers, Tiger's Glory Ultra can be an extraordinary experience. It's a phenomenal feeling when a bunch of Enraged Tiger symbols have locked in place, and you know you are going to collect at least their value for every remaining spin of the bonus round – possibly more. During testing, the best result had locked tigers guaranteeing 120x per spin with 16 spins left to go, then 240x at 10, 720x at around 7 spins left, ending up on 1,080x a pop when there were three spins to go. At most, Tiger's Glory Ultra can now hit 32,464x the bet – the maximum achieved in 880 billion simulated spins, it should be added.

There is a price to pay for all this extra potential in the form of extra bumpy gameplay, and not many will be so lucky. Nevertheless, for those whom fortune deems worthy of making the cut, Tiger's Glory Ultra free spins are breath-taking on their day. The other price to pay is bonus buy entry and full disclosure, the mega win achieved during the review was off the back of the 1,000x buy option. Studios like Nolimit City have helped desensitise the crowd to big price tags to a degree, but Tiger's Glory Ultra's menu of options is still pretty eye-watering at the upper level. However, the game can produce fantastic results for lucky players when it's in the mood, and it's not hard to see Tiger's Glory Ultra becoming a darling of the streamer set.

While Tiger’s Glory Ultra isn’t going to win any awards for originality, it’s certainly going to satisfy a lot of people looking for brutal, high volatile gaming with plenty of bite. 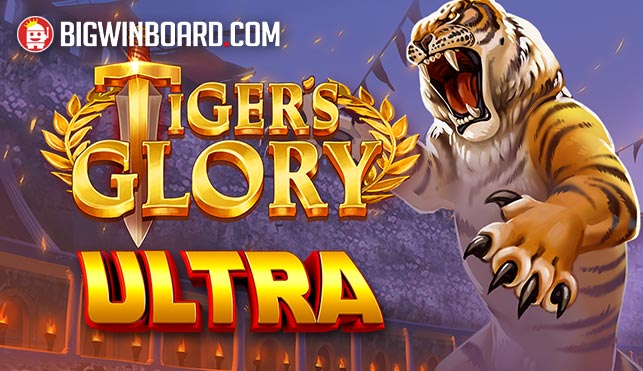