Developer Stormcraft Studios are possibly best known for creating sequels to some of Microgaming's better-known slots. First up was Agent Jane Blonde Returns, followed by Jungle Jim and the Lost Sphinx, both of which turned out to be slightly watered-down versions of the originals. Sticking to the watery theme, Stormcraft drag players outside for some fresh air in the fish-filled slot Wild Catch, boasting a bunch of familiar features. The game might share the same name as a Microgaming slot released way back when, but the two share no similarities whatsoever.

Stormcraft certainly like the 5x5 reel setup, since most games they have released to date have used the format. With that, players get 50 paylines to land combos on, with 25 symbols filling the grid on each spin. Players also get the useful Rolling Reels feature which is a classic trademarked Microgaming mechanic that's also central to several Stormcraft releases. Rolling Reels removes winning symbols from the board while allowing new ones to cascade into the vacated spaces. This can cause chains of winners, or rolls, to occur on a single spin to help build up a few coins.

Before that can occur, players have to bait up stakes to reel in prizes. On the lower end of the scale, bets are available from 20 p/c or can be raised to £/€20 at the most. The highest of rollers might not be satisfied with that level, but when you realise the potential, you can see why they might have kept the max bet rather low perhaps.

What's not low is the volatility which has been given a high rating in general, though players do get some influence over the math model during the bonus games as you will learn. RTP is also nicely in the higher range bracket with an above-average rating of 96.3%. Plenty more juicy stats are provided which may help tip the balance for you, including a hit rate of 29.56%. Far more frequent than actual fishing for sure.

Once bets, wellies, and rods are ready, it's time to get your hands dirty. Wild Catch's setting is a really nice one, with the grid located on the water in what looks like Canada, full of mountains, greenery, meadows - complete isolation. If you ever need some naturalistic escapism, then Wild Catch could be just the ticket.

As well as the setting being a fisherman's dream, the symbols all follow suit. There are nine regular pay symbols, made up of fishing paraphernalia such as flies, hooks, and tackle boxes, followed by five picture symbols. For an indication of value, five of the low pays are worth 1x up to 10 times the stake for the premium angler symbol.

Keep an eye out for the wild symbol which, not only performs its usual substituting duties, but also comes with a few other twists to help you on your way. In the base game, the wild can randomly turn into a Splashing Wild where reel 2, 3, or 4 becomes completely stacked to guarantee a win. The Splashing Wild remains in place for any subsequent winning rolls and triggers once every 122 spins on average. During the bonus game, the wild takes on additional powers.

Landing 3, 4, or 5 scatters awards 5x, 25x, or 250x the total stake and opens up 3 different Free Spins rounds to choose. At first, only the Crystal Lake option can be played, but the other 2 become available when free spins have been triggered a certain number of times. During free spins, the Multiplier Trail comes into play which applies a multiplier to wins which increases on consecutive rolls (you might now this feature from Jungle Jim).

Free spins also come with Wild Stacks that grow by 1, 2, or 3 on every spin - the more volatile the option, the quicker the stacks grow. On top of everything, players also get 3 fixed jackpots which may be triggered once all rolls have completed in the base game or on free spins. Wild symbols are collected on each spin or roll, and the more accrued, the better the chance of winning one of the three jackpots.

Wild Catch is an interesting slot, a sort of a who's who of older Microgaming games in a way. It includes aspects of a bunch of classic slots rolled into one, but brings everything together in a pleasing amalgamation rather than feeling like a cheap copy. On the down side, we're not super thrilled about the 5x5, 50-payline setup and would rather have seen a 3,125 win all ways approach. Although that could have possibly made the game crazy volatile.

Stormcraft has packed a ton of features into Wild Catch too, making it quite unlike real fishing. Instead of waiting around for a bit of action, there is always something going on. From Rolling Reels to the chance of hitting a jackpot to the juicy free spins. Bonus games might be compact, but they can also be ultra-intense thanks to multipliers which are larger than you typically get with other Multiplier Trail games.

So yeah, there are a lot of things about Wild Catch that have a familiar feel, but it is also an entertaining game that stands on its own two feet. It's got a great look for one, and the gameplay has been paired seamlessly with the features. Like real fishing, they can certainly reward patience, making the wait well worth the adrenaline nudge. So what can the worm drag in? Well a surprisingly large catch with rewards of 9,000 times the stake possible during the highly volatile Golden Rapids option.

Overall Wild Catch is a respectable effort. Stormcraft has combined proven features and massaged them into something new worth a look. The vibe is a good one and the whole package is tied up with an impressive potential for budding anglers to tackle.

Wild Catch is a busy fishing-themed slot that caters for anglers or those looking for a well-developed game that combines new and classic features. 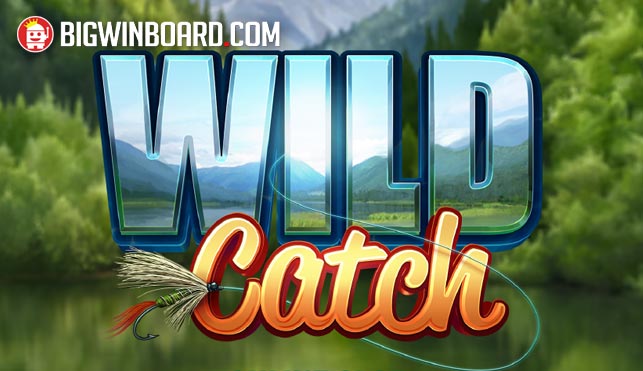