Just one fortune would be enough for most people, but for those who want a bit more, how about 100 Fortunes? This Asian themed slot is brought to you by independent game developer Northern Lights Gaming. Without a platform of their own, they have been creating slots exclusively for Yggdrasil, but have now turned to SG Digital instead to try their luck. Will jumping ship have a positive effect on the final product?

First impressions are ok and the game is rather nice to look at but doesn't have the immediate wow factor that you hope for when booting up a game for the first time. The most eye-catching feature is the slightly unusual 5 reel, 6 row grid that sits in a traditional Chinese structure. Surrounding the grid are a bunch of old buildings, like a rural village, full of swaying lanterns, and Eastern imagery.

If you play with headphones, make sure they are turned down to start with. The clanging gong that opens the game could burst sensitive eardrums if the volume is up too loud. It rings again at times after that, but most of the game is accompanied by a chilled out Chinese soundtrack straight from the Asian Slot Themed Greatest Hits Vol 17.

The paytable throws up a few surprises when it comes to symbols. On the low pay side we get standard brush stroke style J-A royals. For the high pays, players spin for a square holed gold coin, a porcelain plate, a Ming vase, and one of those Maneki-Neko waving cats. Finally, the game’s logo is the top paying symbol, and is worth the not so princely sum of 3 times the stake for five of a kind. All symbols need at least three of a kind to payout, and there are 40 paylines during the base game. That number can be expanded which we will see shortly.

Playable from 10 c/p to £/€ 500 a spin on all devices and powered by a 96.20% RTP, medium variance math model, it comes with several features such as a Pick Me Bonus, a so called Yo-Yo Smash Bonus and two different free spins bonuses.

They could almost have called the game 100 Features and not been far off the mark because there is a lot to get through. First up is the Yo-Yo Smash Bonus which can be randomly activated after each spin. Here, one to three of the yo-yos above reels 2, 3, and 4 can drop down and award one of these modifiers:

The regular Free Spins bonus round comes with at least 5+ free spins, active yo-yos, and may expand reels to 5x8 size with 75 paylines. At the end of a free spin, all 5 yo-yos may drop down and swap random symbols with wilds – this is called the wild bonus. Also, the lanterns on the frame may light up when there isn't a win. If all 4 light-up they trigger the wild bonus and an x2 multiplier for wins on the next free spin. The Super Free Spins, meanwhile comes with a guaranteed wild bonus on each spin and reels are expanded to 5x10 size with 100 paylines.

Well, you've probably never come across the word yo-yo so much in your life so apologies for the overload. They play a central role and pop up at random during the base game or during Free/Super Free Spins so you can’t avoid them. There is plenty going on with 100 Fortunes, though, a lot of it does overlap, or appears in a slightly altered form. On the plus side, players who like an intricate slot, with a ton of rules, and delicate little extras, might find something of value with 100 Fortunes although we personally felt it was a bit over the top at times.

Your head might be spinning, like a yo-yo (sorry), after reading the features, but it does make more sense in action. It means that there is often something active, but payouts are typically on the low side and not greatly enhanced by the modifiers or features. There are times when the grid is teaming with wilds, but even if you manage to get the game area totally cluttered with wilds and logos you are still only looking at 120 times your stake with default rows or 300 times your stake with all 10 in play. Multipliers can help when they appear, however. Other downsides include slow animations that start to grate after a while, and the sluggish pace of the game in general.

Overall, 100 Fortunes is a fairly good looking slot but one that comes across as a bit more complex than it would have to be. It’s obvious Northern Lights has taken the time to think, plan, and execute and the result is a polished game. 100 Fortunes may appeal to Asian fans looking for a slot bursting with extras and regular payouts, albeit on the smaller side. Others that require more of a nail biting thrill ride with big potential, or that are completely over the Asian theme, are probably better off looking elsewhere.

100 Fortunes is an Asian themed slot filled to the brim with extras, resulting in a somewhat sluggish and unnecessarily complex game. 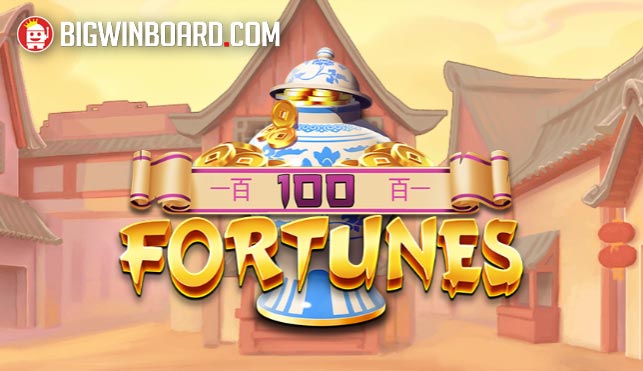