If Book of Dead superstar Rich Wilde had a sister, ARK OF MYSTERY heroine Anna would be the one!

Quickspin has some seriously talented artists at hand. The drawing of Anna, which is the name of the heroine in Quickspin's new slot Ark of Mystery, is world class and, we must admit, unexpectedly made us fall head over heels in love with an animated online slot character. The thick chestnut coloured hair, the enchanting Emerald eyes, the pouty lips...right, moving on now.

Aside from the fact that we now have a female explorer in this otherwise male-dominated ancient Egypt department, it does bear all the typical hallmarks of a classic Egyptian adventure slot. In fact, it appears to have been influenced by slots such as Pharaoh’s Tomb (Novomatic), Book of Dead (Play'n GO) and Legacy of Egypt (Play'n GO), although firmly standing on its own legs with its own unique features.

Ark of Mystery is a 5-reel, 3-row slot with 20 paylines. Playable on all devices from €0.20 to €100, we get to follow Anna in her quest to unlock lost treasures guarded by curses of the ancient Pharaohs. Central to the game is the special multiplier symbol and the wild respin feature which both can come together to award quite decent wins as you will see.

Ark of Mystery is comparably simplistic in design, yet classy and arty at the same time. The somewhat stereotypical quintessence of ancient Egypt is captured with a backdrop illustrating what appears to be a treasure tomb flanked by two pillars. Animated flames and fireflies along with a choir type sound loop help bring the game to life.

There are no surprises to be found looking at the regular symbols. Quickspin has chosen the safe route by going for the typical Egyptian symbols we've seen countless times before - the Eye of Horus, scarabs, and Ankh's represent the premiums with Anna herself leading the way, awarding you a win of 50 times the stake for 5 across a full payline. The low-value symbols are 5 in total and come in the form of hieroglyphic style royals.

The game also includes a wild ark symbol as well as a multiplier symbol which we will be looking more into below as they play a central role in the game. Ark of Mystery has a 96.53% RTP with 57.29% allocated to the base game and 39.24% to the respin game. This bad boy has dropped an observed win of 6509 times the stake during its testing phase, so there are indeed some riches to be found here.

Akr of Mystery doesn't come equipped with the conventional type free spins feature you might expect. It never leaves the main game scene and instead puts focus on two continually present features, the wild respin feature being one of them.

When the wild symbol, here represented by a golden ark, drops on reels 2, 3, or 4, the wild ark respin feature is triggered. The wild is then locked in place, and a respin is awarded. Moreover, the wild will go on to expand on the reel by one symbol with every respin awarded until there is no more space on the reel left or no more wild arks land on the reels. This way it's possible to trigger between 2 and 6 respins.

It is possible to land full stacks of wilds on the three middle reels, which in combination with the multiplier booster, has potential to result in some whopping wins.

Keep an eye out for the pyramid-shaped multiplier booster symbol because that's the one you will have to depend on for the truly epic wins. It appears in full stacks on reel 5 only, and each single symbol increments the multiplier by 1x.

Every spin payout is multiplied by the current booster multiplier so imagine a scenario activating all three wild arks along with a juicy multiplier, which by the way can reach up to 22x with the help of the respins feature. That will set you up for some good stories to tell for sure.

We really enjoy the new direction Quickspin has taken. They have always produced entertaining slots of high quality, but were slow to recognize the demand for high variance and massive potential. This appears to have been fixed now, and Quickspin is more or less on par with most other established providers in that aspect. If the company keeps it up like this, Quickspin will definitely be winning more hearts over in the years to come.

In Ark of Mystery, the wild respin feature and multiplier booster work gallantly together and manages to keep us interested throughout the session. There's really no need for a free spins feature and the heart-stopper slow spins adds pulse to the game. It may not be capable of the extreme win potential seen in other games, but surpasses other classic Egyptian themed slots such as Book of Ra and Book of Dead, keeping it more on a realistic and achievable level. 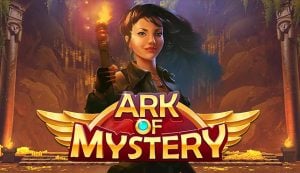