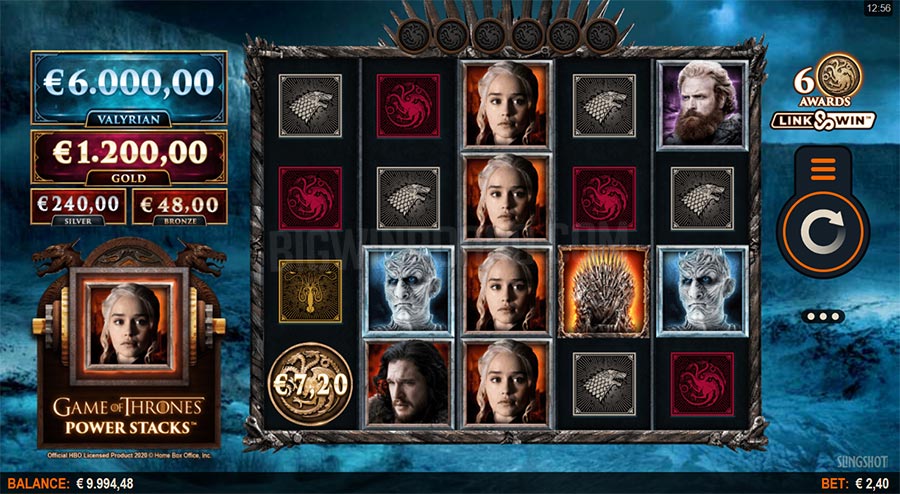 ‘We are going to leave the world better than we found it.’ So said Daenerys Targaryen, before later annihilating King’s Landing, then getting stabbed by her squeeze and blood nephew Jon Snow, aka Aegon Targaryen. Depending on your perspective, Dany’s rampage was either the greatest or the worst way of ending the extraordinary Game of Thrones series. Whichever camp you are in, we can pretty much all agree that at the time, the series was a cultural phenomenon. As such, it is no surprise to see the warring houses of Westeros plastered on merchandise as diverse as Night’s Watch Boyfriend Pillows to life-size Iron Throne replicas, and of course – slots.

The branded GoT inspired slot in question today comes courtesy of Microgaming partner Slingshot Studios. Microgaming, as you may know, has been here before, having released the super hit Game of Thrones 243, along with a 15-payline version, back in 2014. The new release from Slingshot, titled Game of Thrones Power Stacks, has taken the theme and run with it like a Lannister army before an irate dragon. It starts at the foot of The Wall, where a 5×5, 40-payline game grid sits before the magical barrier that protects humans from Night Walkers brooding in the far North. Surrounding the reels is evidence of features to come, such as the Link&Win, a few jackpots, and Power Stacks. When free spins conclude, the background image changes – King’s Landing, the seat of Westeros’ power, was the second location to hit the screen.

Fans will be delighted with the opportunity of heading back to Westeros, a feeling intensified by magnificent music drawn from the series. The show’s legendary title track, for example, got us all giddy during free spins, and songs like Blood of my Blood from season 6 helped pumped adrenaline in the base game. This is deft handling of a branded slot if ever there was one.

‘When you play the game of thrones, you win, or you die‘, so said Cersei Lannister. Game of Thrones Power Stacks might not be quite so extreme, but is highly volatile nevertheless while also packing a sizeable max win to boot. The game comes in a variety of RTP configurations, where the most generous has a theoretical return value of 96.20%. Apart from the flexible RTP, each version has very slight differences in hit rate as well, though all hover around 29%, or close to 1 in 3 spins. Getting a GoT fix is possible on any device, where bets of 20 p/c to £/€20 per spin may be set.

Like the rest of the game, its Game of Thrones theme shines brightly on the paytable too. Four of the great house emblems are used for the low pay symbols – Greyjoy, Stark, Lannister, and Targaryen worth 2 to 2.5x the bet for a line of five. Then there are five key figures from the drama, Tormund Giantsbane, the Night King, steely-eyed Sansa, Dany, and the guy who knew nuthin’, Jon Snow. Landing a five of a kind win comprised of characters causes a payout worth 5 to 7.5 times the stake. When premium wins hit, players are also treated to a sweet animation from the series. The game’s logo is wild and also blasts a quick animation when it is used in a win. This can happen when substituting other pay symbols or in wins made up of wilds only – which are worth up to 25x for five of a kind.

The Power Stacks indicator is visible in the left-hand corner and randomly displays a symbol type. This symbol is then Super Stacked for the current spin, with stacks added to all 5 reels. Any symbol except scatters or wilds can be Power Stacked.

Dotting the grid amidst the regular symbols are special coin symbols. When 6 or more land, they trigger the Link&Win feature. Triggering symbols are locked in place, and all other symbols are removed from the board. Here, 3 spins commence, where new coins reset the counter while locking into position as well. The feature ends when spins run out or the Valyrian prize is won. Regular coins possess values of 1x to 15x the stake, while special coins represent the 4 jackpots. These are bronze, silver, gold, and Valyrian worth 20x, 100x, 500x, and 2,500x the bet, respectively.

Landing 3 Iron Throne scatters in the base game awards 15 free spins. During free spins, all values are multiplied by x2 – including wins from the Link&Win which can trigger from free spins.

If ever you were looking for an excuse to head back to Westeros, Slingshot Studios has provided a very persuasive one. The team has made exceptionally good use of the theme in both obvious places like the background as well as in clever smaller touches like Valyrian steel being the highest value jackpot. Game of Thrones Power Stacks comes across as a game made by stalwart fans for an equally appreciative audience. Basically, if you like the show in any way, you’ll feel right at home when George R. R. Martin’s world comes blazing to life on your device.

Putting the theme to one side for a moment, it has to be said the features aren’t super inventive. The Link&Win, which is also used in Thunderstruck Wild Lightning, for instance, has a more creative bent to it, and doubling wins in free spins was a new idea many moons ago. Though really, does it matter? When a game lets you relive one of the greatest shows telly has ever seen, innovative features are a secondary concern. And it’s not like they’re dishing up Flea Bottom level rewards. The Valyrian prize in free spins, for example, is worth a cool 5,000x, while the game actually maxes out at 25,000 times the stake – that beats the previous GoT slots, if you were wondering.

Slingshot has done a stellar job with the branding. Game of Thrones Power Stacks brings much of the show’s gravitas to the reels, dealing with it respectfully and in a playful way. The game looks fantastic, the music is sublime, and the features might not ooze originality but can still deliver. Non-fans or those turned off by the series’ finale might disagree, but as Jon Snow said, ‘We look up at the same stars and see such different things.’

Slingshot Studios makes exceptional use of the Game of Thrones theme to tempt fans back to Westeros. 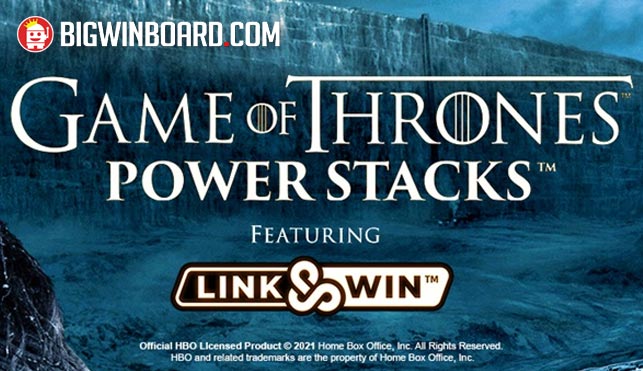