Highlander is a branded slot from developer Microgaming that brings the classic 80s fantasy movie to the reels where players can spin for immortality. Okay, maybe not immortality, but the game offers a couple of features to go with scenes, imagery, and animations taken straight from the film.

Interestingly, back in the day, the movie tanked at the box office failing to make as much money as it cost to shoot. Far from being a flop, however, Highlander went on to become a cult classic, spawning four follow up films, a tv series, as well as a slot. Microgaming's release coincided with the films 30th anniversary, roughly, and takes fans on a trip through the Highlands to New York City.

If you missed the film, it revolved around Connor McLeod, a Scottish immortal who had to battle other immortals from around the world. Connor's arch-nemesis was the Kurgan who was on a mission to dispatch every other immortal on earth. Should there be just one immortal left on earth, they would be awarded 'The Prize'. The Prize is a gift of knowledge, giving the bearer the ability to enslave every human being on earth. Not a comedy then.

As the movie much-quoted line states 'there can be only one'. Despite possessing immortal status, lopping a head off will bring about their demise. There are none of those shenanigans during the game though, which starts in a far more sedate manner. Just like the movie which depicted present-day Connor respectfully running an antique shop in New York. There are plenty of flashbacks to the old country though, and Highlander the slot begins in the Scottish countryside amidst rolling hills, meandering streams, all beneath a moody sky.

The classic Microgaming 5-reel, 3-row game area sits in the middle of a naturalistic location, with a soundtrack that alternates between a sort of Celtic mysticism, and a banging 80s tune. Below the reels is the menu where players choose bets from 40 p/c to £/€30 to begin the eternal battle of the ages.

The math model isn't exactly the Kurgan in algorithmic form, with volatility set to medium. RTP is one stat most players will be able to get behind, rated between 96.4%, as well as a rather high hit frequency of 34%. That means winners are hit on a slightly better than one in three spins.

Highlander does not use paylines to land winners on. Instead, as long as three or more matching symbols sit on consecutive reels left to right you have a winner, providing 243 ways to win. The symbols supplied are partly film based, partly generic 10 to A royals. Microgaming has used characters from the film as the premiums such as Heather, Brenda, the Kurgan, followed by Connor from the past and the present. The logo is wild, substituting for any symbol except the scatter, and is worth as much as present-day Connor in combinations in its own right.

Prepare to enjoy the rockin' guitar riffs when the features spring to life. The scatter is what you want, preferably 3 in view, though 2 are enough to trigger the 2 Scatter feature. During the base game, when two scatters land, they turn wild to help improve your chances of winning something for the trouble.

Naturally, 3 in view is better, triggering Free Spins when they appear anywhere on the reels. Players are awarded 10 free spins in total, and the game shifts to the mean streets of New York City for the action to play out.

What makes Free Spins special is the introduction of Quickening Wilds. On a side note from the movie, after one immortal dispatches another one, the deceased's power is transferred to the winner in a process called The Quickening. In the game, what this means is that bolts of lightning hit the reels turning random symbols wild. Each time Quickening Wilds strike, an ever-increasing number of wilds are placed on the grid. As fun as free spins can be, they cannot be retriggered.

Microgaming's Highlander is an entertaining chance to relive some 80s glory with its old school styling, and streamlined features. In fact, Microgaming has pulled off the old school vibe so well it can look a bit older than it actually is. In an attempt to recreate the rockin' era when the film was released, Microgaming has gone for the classic approach. The background might be hi-def, but the gameplay is more simplistic, fitting the movie like a glove.

From a strictly gaming standpoint, it all comes down to getting scatters to do their thing. A nice touch is the 2 Scatter Feature which assists players by stringing together more wins when they turn wild. A kind consolation, instead of despair settling in when you miss the feature thanks to an elusive third scatter.

Get three scatters though and its game on. Highlander kicks it up a few gears by flipping the scene as well as changing to a more energetic track. Of course, the Quickening Wilds feature is the highlight, and increasing numbers of wilds on consecutive hits is another great touch. It worked well during the Flint bonus on Microgaming's Dragonz, just as well as it works here. Get the bolts flying to produce wins of up to 3,416 times the stake.

Okay, so Highlander might not be the most dynamic slot out there, nor the highest paying, but it ticks all the right boxes to make it a branded slot success. The movie permeates every aspect, from the characters, the location, and of course, the character symbols. At the end of the day, fans of the movie will be all over it, as will anyone who fondly remembers the era looking to relive some 80's action on the reels.

Players can take part in their own Gathering with Microgaming’s branded slot Highlander by joining Connor McLeod in a quest for immortality and coins. 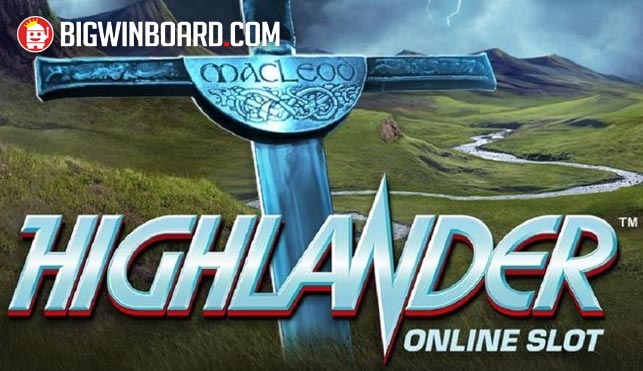