It might not be their forte, but ELK Studios have chosen to head into the cluster pays genre with their new Micro Knights title. The result is similar in feel to Relax Gaming’s’ Snake Arena with a dash of Rabcat’s Treasure Heroes. On mobile devices, Micro Knights looks like a smartphone game you’d download from iTunes or Google Play. Everything is small and intricately detailed, and that goes for the grid as well. In portrait you won’t notice, but in landscape mode, the grid is shrunk down to reveal more of the surrounding countryside. It’s one of the smallest grids you will see. Thankfully, modern phones have such high resolutions. A few years back, you’d be staring at a pixilated blur. Next to the grid are knights that join the melee at times, as does the dragon that looks like Toothless the Night Fury from How To Train Your Dragon.

The action takes place on a chess inspired 7x7 grid where 49 symbols tumble into place with each new spin. Micro Knights uses a cluster pays system, meaning 5 or more matching symbols landing adjacent to each other results in a payout. When that happens, the winning symbols are removed from the grid to let new ones fall into the gaps. A common system, and one that can result in chains of wins from just one spin. With Micro Knights, it's also the way that many of the features are pulled into the game as well.

To get involved, players choose stakes from 20 c/p to £/€100 per spin – on manual or auto which is called traditional betting. ELK has once again provided their four betting strategies - Jumper, Booster, Leveller and Optimiser if you want to take a strategic approach. When it comes to symbols, like most grid slots, each one is custom-built for the game in question. Micro Knights uses meat on the bone, water wells, arrow targets, and mushrooms as the low pays. The high pays are bunnies, frogs, goats, and bulls. At the most, a cluster of 20 or more bulls returns 250 times the stake. The golden chalice is the final symbol of note in this section and is wild - it can substitute for any symbol except the bonus symbol.

Important stats include the return to player rate which is nicely average at bang on 96%. Overall potential is nothing to get too excited about unfortunately as ELK has decided to cap its game once again, but a medium/high variance math model produces a balance of those smaller one-off wins, with the bigger, feature fueled ones.

Like a good grid slot should, Micro Knights is one of those games that can get on nice rolls of consecutive wins. These are the best moments by a long shot, and you’ll need to activate as many features as possible to make that happen. The first initial spins are a little confusing, but if you've ever played other grid slots such as Reactoonz, for example, you'll quickly get the grasp of it.

One of the most used features is The Queue and is the hardest one to explain. To the left of the reels is the Charging Knight who randomly runs across the grid, pushing one row off. This row moves below the gird, and the symbols line up in a queue.

Matching symbols are grouped together. Say there are two clusters of three bunnies on the grid, and next in the queue are two bunnies. The symbols from the queue will drop onto every cluster on the grid that could make them a winner. In this case, the two groups of 3 bunnies. Once those symbols have been taken from the queue, the next in line can be used if possible. Fresh spins remove all symbols from the queue. At the top left of the grid is the Smashing Knight. He also comes into play at random, and when he does he increases each symbol counter in the queue by one.

Along with cluster pays is a win meter to the right of the grid. Each winning cluster moves the meter along, and if it is filled it triggers one of these Feature Flags each time it is filled, in this order:

The meter will keep filling and awarding features as long as clusters continue to form. During the base game, the meter resets with each new spin.

The final feature is the Bonus Game which is triggered when 3 bonus symbols are in view. The bonus game consists of 5 free spins where the win meter and the queue are sticky and do not reset between spins.

Micro Knights is one of those games that has several elements that remind you of other slots. Despite that, it doesn’t feel like a cheap attempt to make something quick and easy. Indeed, Micro Knights is extremely well put together, from the excellent intro to the intricately detailed graphics, ELK Studios has put their craftspeople to good use. There is more than enough personality injected and feature add-ons to make the experience a fairly original one. It’s fun too, with a crazy ‘I want more’ factor to it.

What makes it compelling is partly the speed at which things happen. Partly because one spin is all it takes to set a train of features rolling which is neat when several do link together. It’s much easier to accomplish that during free spins, and you can see why you only get 5 to start with.

Although ELK has accomplished quite a decent grid slot there is some downsides too. The biggest gripe is the potential which ELK, for whatever reason, have once again capped at 2,500 times the stake. That factor alone results in a game that lacks the bite to compete with the big grid slot competitors out there. Matching it with one of those beasts is like putting Aunt Franny’s Chihuahua up against the neighbour’s Pitbull. While it can go on and on, when the features chain together, it doesn’t quite go as berserk as massively volatile grid slots like Dragon Fall or Jammin' Jars that can go on and on.

Nevertheless, Micro Knights is a well designed game that has plenty of fun moments and entertaining gameplay. It might be a little underpowered to be a top contender, but is still worthy of a session or two.

Micro Knights looks good in a vacuum, but it simply does not compare well to the top players in the cluster pays league. 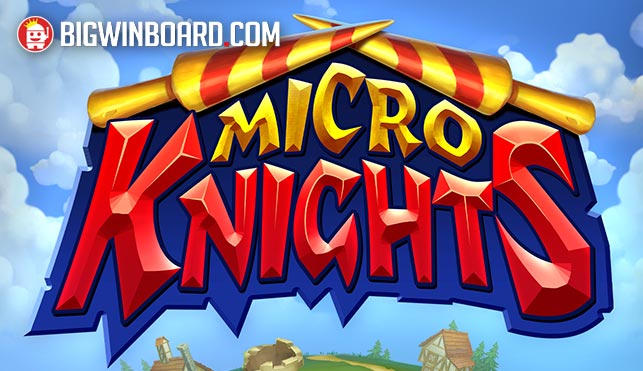