Monopoly Live was designed in a partnership between Hasbro and Evolution, exclusively for the online gaming provider. It was an inspired decision too since practically everyone knows Monopoly, and the iconic board game shows up in several slots. Most gamblers are also aware of Money Wheel games, yet the amalgamation of the two forms creates something completely unique.

For those wondering if a board game would get in the way of a Money Wheel’s flow need not worry. Aside from the all-important branding, there are special segments on the Money Wheel, which when hit add a hugely exciting Bonus Round to the gaming. There are no ruthless family members trying to squeeze you for rent either – always a good thing.

Following on from Dream Catcher’s success, Monopoly Live gives players the chance to bet on the number they think a wheel will stop on. Play is held in one of Evolution’s busier looking studios, where the game is live-streamed 24 hours a day in HD. The Money Wheel takes centre stage, but to one side you’ll find Mr Monopoly sipping tea, and on the other side, dice sit waiting. A background image of high-rise buildings completes the tastefully arranged scene oozing board game spirit.

Despite the superbly presented studio, it is often dealers stealing the show. Each one is a trained professional, who are friendly, chatty, and skilled at directing the action. Continuing with the theme of professionalism, Evolution Gaming holds several licenses from respectable regulators, including the UK Gambling Commission and the MGA so players can be confident they are getting a fair deal. RTP hovers around 96.23% but varies depending on the bet.

Monopoly Live is as intuitive to play as any in Evolution’s Money Wheel range. At the lower edge of the screen, is the menu bar. To the left of it is account information, while the right-hand side displays past results for those who like to incorporate them into their strategy. Betting options are prominently displayed in the middle, so just pick what you like, and it’s time to play. 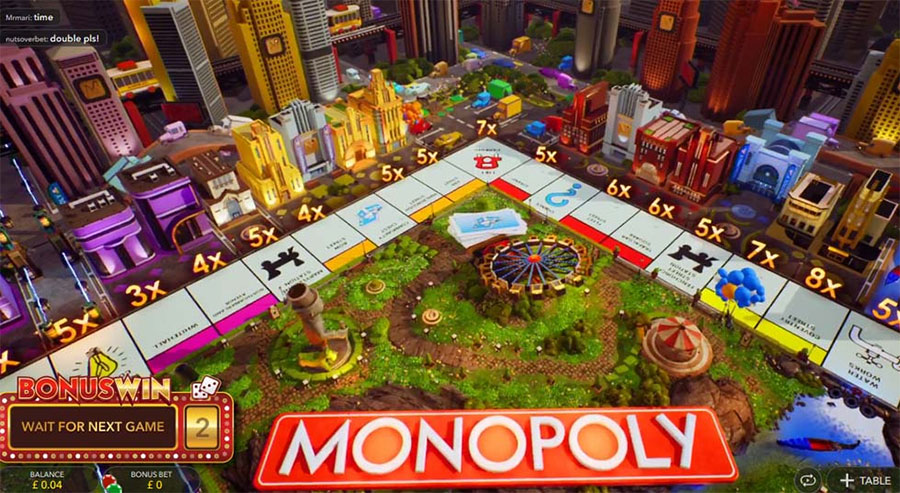 Monopoly Live’s Money Wheel is divided into 54 segments, all of equal size, displaying numbers, ‘Chance’, and ‘Rolls’. All players have to do is guess which segment the wheel will land on when it stops spinning. Get it right, and the prize is yours.

Step one is choosing the size of your stake by selecting the appropriately valued chip. Bets start at 10p/c and rise as high as individual operators allow. The dealer spins the wheel while players are placing their bets, allowing around 12 seconds before closing betting. Tension rises as the wheel slows until it stops to reveal the winning segment. If the winner is a number, players who guessed correctly are awarded the appropriate prize, like so:

Two of the remaining sections on the Money Wheel display ‘Chance’ awarding successful players a random cash prize or a random multiplier. Multipliers are applied to the next spin. If another multiplier occurs on the following spin, their values are multiplied together.

The last two options lead to what separates Monopoly Live from every other Money Wheel game out there. These are’ 2 Rolls’ displayed on three segments, and ‘4 Rolls’ on one. When the wheel stops on either of these two, the action cuts away from the main room view. Next, an animated 3D Monopoly board fills the screen. Any player with an active bet takes part in the Bonus Round, while others get to watch.

Two dice are rolled, sending Mr Monopoly waltzing around the game board – twice for Two Rolls, four times for Four Rolls. It’s worth mentioning that these are physical dice rolled in the studio, rather than being a randomly generated number. If a double lands, players receive another roll.

Prizes line the game board, mainly bet multipliers on properties. Where Mr Monopoly stops, the prizes on the respective square are added to the Bonus Win. Just like moving around the board in real life sees the properties get more expensive, so do the prizes on Monopoly Live’s board increase. Landing on squares like Chance or Community Chest may award cash prizes. Once the rolls have been used, play moves back to the main room.

For anyone who has day dreamed what it would be like to play Monopoly for real money, here is your chance. Monopoly Live is the sort of top quality online gambling you’d expect to find from Evolution Gaming, providing all the thrills of a Money Wheel plus a truly unique experience when the Bonus Round is triggered. There you enter a jazzy, silky smooth animated game sequence, which reignites memories of playing table top Monopoly – the good memories that is.

You don’t actually have to be a fan of the Monopoly board game to enjoy the live gambling version. The board games’ touch is a light one most of the time, largely letting the wheel do its thing. However, landing on either Roll option triggers what can be an exciting trip around the Bonus Round, collecting prizes as you go. Payouts can be significant, as well. It is possible to collect more than one multiplier from the Chance segment before taking them into the Bonus Round. Passing ‘Go’ doubles the prizes on the board too, and the game has produced payouts in excess of 6,400x the stake.

Evolution has once again redefined what is possible when it comes to live gambling. By incorporating the best parts of Monopoly, the studio has added a whole new dimension to Money Wheel betting, sure to entertain a variety of players, including fans of slots.