Microgaming partners Just For The Win take players on a little trip into nature with Wonder Woods. The point of the game presumably is to get a little magic in your life. No matter what the gameplay might be like, Just For The Win slots are typically visually well crafted and pop off the screen. Wonder Woods is more laid back than usual, the symbols and background more subdued. The same can be said for their themes. Usually they are crystal clear, as was the case with a slot like Deco Diamonds Deluxe. Wonder Woods is a little more confusing. Is it magic? Is it fruit? It contains all of these things without emphasising any of them in particular. With nothing to take your hand and lead you into its world, the features and gameplay really need to step up and take charge. Do you find that here?

Graphically, it comes off as slightly generic and there isn't really anything there to give it much personality. In that sense, Wonder Woods feels more like a fruit slot with a modern twist. The game is an explosion of colour, has a soothing feel to it, and strangely, we experienced bursts of SNES flashback whilst playing it. The soundtrack is quite good and consists of some laid back electronica that is the biggest stand out in the game from an aesthetic point of view.

The game is played over 5 reels, 3 rows and 20 paylines. Reels are transparent, so the forest background is fully revealed. The base game takes place during the day, but trigger the bonus round and night settles in, and things get a bit more special. Players have a good selection of bets starting at 10 p/c up to £/€100 per spin. The game can be spun manually or automatically on virtually any device. Stats would suggest Wonder Woods is more suited to casual gamblers. Volatility is smack bang in the middle on a medium setting. Hit rate comes in at 22.22% and the RTP is all good at 96.03%. No real complaints so far.

The goal of the base game is to land combinations of three or more symbols on a payline. Symbols are predominantly classic slot icons, though they have their unique touches. The low pay symbols are card royals J – A, with woody decorations such as leaves on them. They are followed by three fruits – cherries, grapes, and oranges. The most valuable symbol is the Wonder Woods logo which returns 20 times the stake for five of a kind. Rounding off the base game paytable is the Wild symbol which substitutes for any regular symbol and is worth the same as the Logo when it lands in combinations. With the hit rate and volatility, the base game putts along at a steady rate, and the features land fairly quite often to mix things up.

There are a couple more symbols that land to add additional entertainment and winning potential. The first we'll look at is the Mystery Symbol. The big question mark icon can show up at any moment during the base or bonus game. When a spin has completed, Mystery Symbols can turn into any other symbol except the Free Spins. If more than one land at once, then they all turn into the same matching symbol.

The Free Spins symbol can appear on any reel and 3, 4, or 5 of them awards 8, 10, or 12 free spins respectively. During free spins, the game finally manages to creep out of first gear and up the stakes slightly. What can make them effective is that Mystery Symbols that land become Sticky Mystery Symbols and remain in position for the full duration of the bonus round. Pick up a few of these early on and it can lead to some pretty satisfying wins as they build up in number. One more thing, if a reel contains only Sticky Mystery Symbols then it turns it a full reel of Stacked Wilds. That wild stack then remains in place for the remainder of the feature.

Wonder Woods was a tricky slot to review. It failed to excite much of a response either positive or negative. It does its thing, wins come and go, but by the end of a session you feel strangely unmoved. As if nothing actually happened. Wonder Woods is like an old favourite hoody that you just can't throw out, but you wouldn't dare wear in public either. It just sits there in your wardrobe, taking up space. Perhaps it's the lack of personality; Wonder Woods feels too modest, too reserved. It is not in your face like other JFTW titles, it doesn't grab you. It's not bad looking nor the worst game out there, it's just rather flat, like not much passion went into its construction.

The main issue though, from a gambling standpoint, is that it’s not very exciting either. The steady hit rate means wins come often, small, and don't have much promise. Free spins do have their moments when the mystery symbols start to add up. Then nice wins can land, but the overall potential is low. Even at the most, with a stacked grid of wilds, the result is 400 times the stake in a single spin. A multiplier or two would not have gone amiss there.

At the end of the day, Wonder Woods might be the right match for a casual gambler with a penchant for fruit symbols. Anyone else looking for high potential, high adrenaline ride is unlikely to find anything like that in these Woods.

Wonder Woods doesn’t have any significant problems, but there just isn’t much about this slot that makes it worth your while. 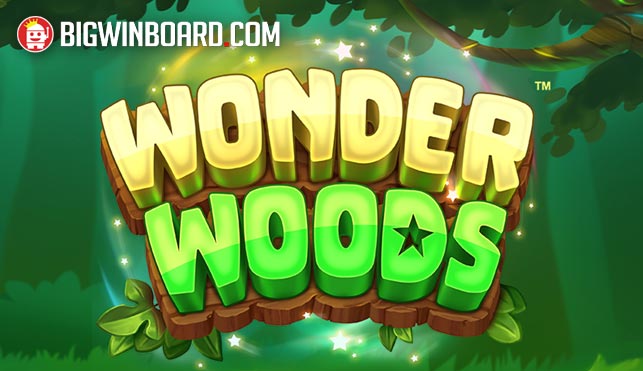