Sitting at the top of just about any casino's A-Z list comes 123 Boom! from developer 4ThePlayer. The last slot we reviewed from these guys was a shark-infested outing that offered all types of reel options. In several ways, 123 Boom! follows the trend, setting its pirate-themed action on the water, while offering a couple of unusual slot setups to try. Does it work? Some will adjust, others will be turned off by the unorthodox gameplay.

The game is located on the high seas, its slot arranged in a 5-reel, 4-row configuration along with 1,024 ways to win. Or is it? 4ThePLayer has come up with a mechanic called the Slot Slider, where flipping your phone or hitting the Spin Mode button rotates the grid. There are two modes – Slide Spin or Top Spin. In Slide Spin, the reels spin right to left and pay left to right. In Top Spin the reels spin top to bottom and pay bottom to top. This probably makes no sense in writing, though nothing a few spins won't quickly sort out. Except maybe Top Spin, that one is a little disorientating and takes a while to get used to.

Surrounding the reels, on each side, or above and below (depending on mode) two ships battle it out. The absence of flags means it could be pirates, merchants or navy. One at least must be a pirate ship, going by all the swashbuckling imagery. The soundtrack brings up feelings of the sea and fits the pirate theme in a good way.

Once players have decided which mode to spin on, bet selection is next with options ranging from 10 p/c to £/€50 – across any device. Stats are one area where 4ThePlayer shines because they throw it all in the paytable. There you'll find everything from a generous RTP rating of 96.4%, medium-high volatility, and just about everything else. Other good to know stats include a hit rate of one in every 3.5 spins as well as a bonus frequency of 1/203 spins. There are no hidden surprises or second-guessing. Players know exactly what they are getting into, making 4ThePlayer as appreciably transparent as 123 Boom!'s grid.

The cannonball symbol is wild, landing on any reel. If no win is in view, and there are no Cannonball Wilds at the end of the reel, then the Wild slides in the direction of the spin. It blows up symbols in its way, one at a time until a win is formed, or it reaches the end of the reel.

As well as the Sliding Cannonball Wild mentioned above, there are Explosive Wins and a Bonus feature to play for. Explosive Wins are similar to cascade/reaction features. Every winning combination explodes off the grid, so new or existing symbols can slide into the gaps. This sets off chain reactions of consecutive wins from a single spin, which keeps going as long as new combos keep lining up.

123 Boom! comes with surprisingly high potential, and it is during the Bonus feature that best results will be found. It is triggered when 3 or more cannon scatter symbols are in view at the end of an Explosive Wins sequence. The number of cannon symbols is collected, then the feature begins.

The first cannon symbol fires a cannonball wild onto the reels to start the Sliding Cannonball Wild feature. When the resulting Explosive win sequence ends, the next cannon scatter fires another cannonball onto the reels. This process repeats until all the scatters have been used. In general, there is a higher number of Explosive Wins during the feature compared to the main game. Up to 50 per spin is possible. What makes it better is that a win multiplier is used during the bonus game. It starts on x2, rising by 1 following every Explosive Win. Also, scatters continue to land, and whenever they do, they are collected to extend the feature.

4ThePLayer has done something a bit different here that takes some time to form a definitive opinion of. The Slot Slider modes can be a little disorientating at first, particular the Top Spin, so it will be interesting to see how players react. During testing, the left to right Slide Spin was used a lot more since it is the most familiar and easier to make out what is going on. Top Spin didn't seem to offer much benefit over the usual way of playing, but some may like the view.

The bonus game is another unusual aspect of 123Boom! On paper, a bonus with cascades and a progressive win multiplier sounds like standard stuff. Yet, it's little different in practice. The Sliding Cannonball Wild adds a new dynamic, often turning nothing into something with one or two strategic explosions. The bonus game produced some impressively long win chains too, enhanced by the progressive win multiplier and extra scatter collection. At its best, 123 Boom! can produce wins of up to 14,727 times the stake.

When weighing up all the elements, potential, stats, features etc. the pros do outweigh the cons. However, 123 Boom! does it in such a way that could put players off as easily as entice them. Such is the hazard of trying new things, but kudos to 4ThePlayer for being brave enough to do so.

123 Boom! ‘s unusual approach makes it an acquired taste. There is a lot to like though, from solid stats to an explosive bonus game. 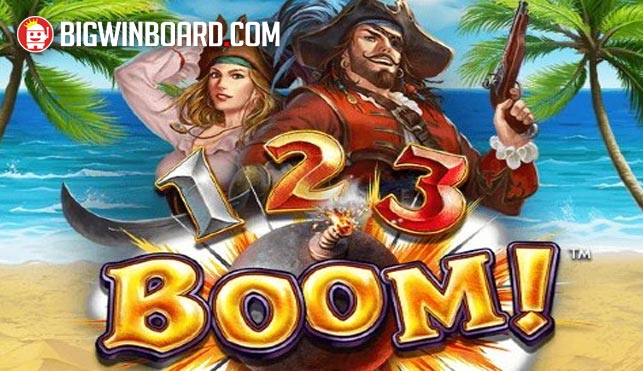