1 Left Alive highlights the developer's solid understanding of what players want in terms of the technical aspects, but the core gameplay isn't all that exciting.

4ThePlayer’s second slot possesses almost as many similarities as differences to their debut 9k Yeti. First, we have the title, which they have again cleverly used to leapfrog to the top of any alphabetised list of slots. The title makes sense though and ties into the slot’s theme nicely for this game is all about zombies, and surviving the apocalypse to be the last man or woman standing. In this case, it's a tough woman as our lead, with a determined look and a couple of big guns. Will she survive the onslaught? Will you want her to?

Like zombies themselves, the zombie trend is one that refuses to die. It has been massive over the past few years with movies like World Z and 28 Days, not to mention the massive TV hit The Walking Dead. Disney even got in on the act with a movie musical featuring teen zombies at a high school. There is something about this grotesque art form that we can’t seem to take our eyes off. Is it to do with the past coming back to haunt us, the desire for an existence beyond death? Nah, it’s probably just the thrill of watching hordes of baddies get mown down as they march inexorably towards the hero. Whatever it is, it makes a good theme for a slot.

To start the onslaught with 1 Left Alive, players can choose wagers from 10 c/p up to £/€100. This is a good range that should keep most people happy. 4ThePlayers has dropped a reel since 9k Yeti, meaning zombies have 5 reels to spread mayhem on. Combine the reels with 4 rows, and players get 1,024 single win ways, but they also get a WAYS+PLUS mechanic. This exclusive system seriously increases the ways to win, which we will cover shortly. All of this means that the game comes with a generous RTP of 97% - bang on what we got last time. With its med-high volatility, 1 Left Alive possesses respectable payout potential, so when it comes to straight forward numbers there no major complaints.

Graphically, 1 Left Alive has average to above-average looks. It’s nothing too special to look at with a standard spooky background and bright, colourful zombie-filled symbols. The lower end of the paytable is your typical 9-A card royals decorated with miscellaneous paraphernalia such as bullets, shotgun shells, scissors, and so on. Better returns come from the zombie encrusted symbols while the lady survivor appear as the wild which can also land in expanded form to cover up to an entire reel. What helps visually is the inclusion of the portrait mode that we saw with 9K Yeti. This stacks reels on top of each other and spins them right to left to make the most of screen space on mobile devices.

Survivalists get a full bag of tricks to make the game come alive, or is that undead? The most unique feature is the Ways+Pays system that the 4ThePlayers team has conjured up. A little tricky to convey using words, but basically, single symbols on reels can payout on their own. Let’s say two expanded survivor symbols land along with three aces. The five of a kind Ace line pays out 15 coins (as an example) using two 1x1 segments from the wilds. The remaining 1x1 segments on the expanded wilds also payout 15 coins each which makes a substantial increase in wins.

The zombie hand that looks like it is about to grab you is the scatter - 3 or more anywhere on the reels triggers the Free Spins. Before the feature begins, players choose one of four biohazard icons to reveal a zombie symbol that the survivor will attack. When that zombie symbol lands during the feature, it transforms into a Blood Wild. Blood Wilds are 1x1 tiles that stick to the reels and move down one space with each spin. You can also retrigger the feature with potential for up to 500 free spins. Epic, but not a patch on the 880 that are possible with 9K Yeti.

So have 4ThePlayers lived up to their name with 1 Left Alive? For the most part they have. 1 Left Alive might not be a ground-breaking slot and the developers have played it a bit safe, but is certainly a respectable second release from a new software company. The basics are covered and provide a solid foundation for the extra features to do their thing. The Ways+Pays feature is tough to describe, but it's worth seeing in action to get an understanding of it.

As with most developers, 4ThePlayer will want to appeal to as many players as possible, and that usually involves building a portfolio of games with a wide range of volatility levels. For ultra high volatility and massive potential, 9k Yeti is the way to go. If you're willing to sacrifice the thrill of chasing massive potential for some more evenly spread wins and more play time, 1 Left Alive is probably the better option. With that said, the potential is still superb, coming in at a respectable 5,200 times your stake.

1 Left Alive may be average in most of its aspects, and there aren't really any surprise elements here, but 4ThePlayer seems to have listened to what the community has to say and appears to have a solid understanding of what players want. As expected, the game is not on the same level of sophistication as the slots on offer from the more established providers, neither mathematically nor visually. 1 Left Alive is not a breakthrough slot and not a failure either which, in a way, should count as an achievement for any new developer. 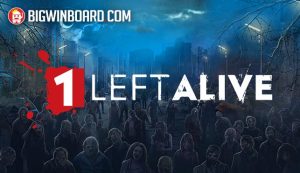 As soon as you publish a game review your competitors rush to do the same. It’s comical 😀

It’s not Zombie Hoard, that I can say for sure.