Demo play is not available in your region. Please visit one of the casinos listed below for free play.
Play'n GO

The title might sound like it comes from an Asian themed slot, conjuring up images of golden beasts wrapped around green or burgundy reels. However, Play'n GO's 24K Dragon is based on the mythical creatures populating fantasy literature or movies. The name actually has more to do with potential wins, rather than metallic purity. It means there is more going on here than first greets the eye, in more ways than one. As well as extra meaning in the title, 24K Dragon also has features which expand rows and win ways.

The game’s bright 5-reel, 1,024 win ways action area sits in a cavernous space, where a fortune in gold lies piled around stone pillars. The view is similar to the mountain of gold Smaug slept on in the Hobbit film. Then again, many dragons slept on treasure hordes in fiction, so it's an apt location. Equally apt is the dramatic soundtrack, heavy on the brass, which sounds like a dragon taking flight to spread terror amongst the common folk. You can easily close your eyes to picture Dany on top of Drogon as the beast lays waste to King's Landing. 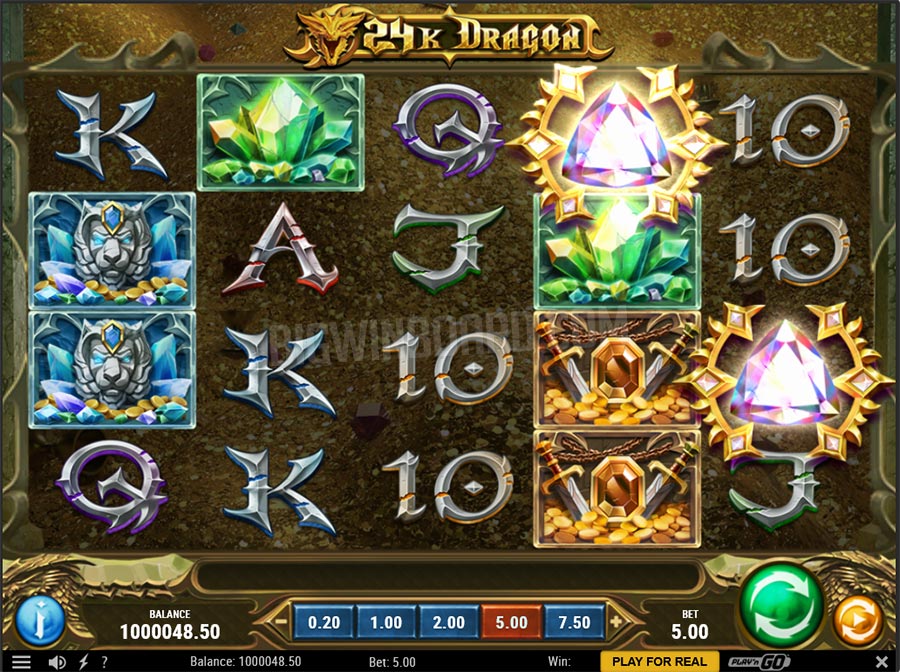 24K Dragon is available on all devices, offering a standard range of Play’n GO bets from 20 p/c to £/€100 per spin. Players get a default RTP rating of 96.2%, though this could be lower depending on operators' settings. Play’n GO slots often tend to the highly volatile side of the spectrum, and with such massive potential up for grabs, it stands to reason 24K Dragon's is high as well. It certainly played out like that during testing where even expanding reels to their full height in free spins was no guarantee of success.

All of the pay symbols involved can land stacked, consisting of five low pay 10-A royals designed in a font that wouldn't look out of place in one of Play’n GO's heavy metal slots. Then there is a lion, a green gem, and a couple of crossed swords as the mids worth 2-2.5 times the stake. Last up are two dragons – a silver and gold one both worth 5x the bet for five of a kind.

Assisting with win frequency and value is the treasure chest wild, appearing on the middle reels. The wild replaces any regular pay symbol to complete a combination, while occasionally upping the value in the base game by revealing an x2 or x4 multiplier.

There are two extras to cover here - a respin feature and the showpiece expanding reels free spin game. Nothing is especially new, both having shown up in past Play’n GO games in one form or the other. They have been tweaked since previous outings though and can be exceptionally effective when the dragon's in the right mood.

Any time a golden dragon symbol lands in the base game, a 24K Dragon Respin is awarded. For this respin, a random number of 1-4 extra rows is added to the grid. These rows contain 3 symbols each and sit above the middle rows. Players get a single spin with the extra rows and extra ways to win.

Next is the bonus game, triggered when 3, 4, or 5 diamond scatters land to award 8, 15, or 20 free spins respectively. As in the base game, free spins begin on the standard 5x3, 1,024 win ways grid. Now, when golden dragon symbols land, they do not trigger a respin, but are instead collected. A meter to the left of the screen tracks your progress as you go. When a certain number has been accumulated, extra rows are added above the main reels in a similar way to respins, except they remain in play for the duration. The collection system goes like so:

In free spins, treasure chest wilds always reveal a multiplier. If more than one wild is used in a win, their values are multiplied together up to a maximum of x64. During the feature, 5, 8, 15, or 20 more spins are awarded every time 2, 3, 4, or 5 scatters are in view on the reels to lengthen the round. There is no limit to how many free spins players can rack up in this way.

Take the creatures from Dragon Maiden, the style of Testament, and the reel expansion capabilities of both, then mix them to get an idea of what 24K Dragon is all about. The game world has been well crafted with plenty of the winged beasts to satisfy fantasy fans looking for a fix. Graphically of a fairly high standard, the stirring orchestral piece adds another layer of spectacle to the game, resulting in another striking Play’n GO slot.

Moving on, 24K Dragon might not be super original when it comes to gameplay, but overall, the experience does feel somewhat fresh in action. A few alterations to the features help 24K Dragon stand apart from its forebears. What also makes it stand out is the much higher than normal potential. Play’n GO usually stick to 5 or 10k wins like clockwork. That rule has been tossed out in favour of potential up to 24,000 times the bet this time around - hence the title. Quite why they decided to go so huge on this one is a mystery. While a decent game, 24K Dragon doesn't feel like a flagship release or a game the studio is going to majorly hype.

All up, 24K Dragon is certainly good for few spins, though Tolkien enthusiasts will get more out of the D&D visuals. Regular players can still get a kick, particularly big win chasers due to the much larger wins on tap than we are used to seeing from Play’n GO.

If you liked the pacing and mechanics of Dragon Maiden or the overall feel of Testament, then 24K Dragon is a solid addition building on that sort of gameplay. 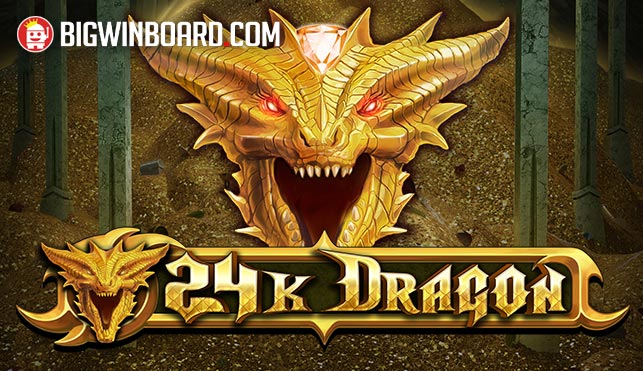