✅ Play Adventures Of Doubloon Island on

Following on from Assassin Moon, a secret agent game possessing several similar features, comes this pirate-themed slot from Microgaming partner Triple Edge Studios titled Adventures of Doubloon Island. The headliner remains the trademarked HyperHold mechanic, which, for whatever reason, has been tweaked to offer even lower benefits this time around. As well as a reduced hold & win feature are several alterations, not to mention a theme shakeup, separating the two games.

The adventure gets off on a positive footing due to some nice imagery greeting players when the game loads. Played using 5x3 layout along with 20 paylines to land winners on, the reels are set against what looks like blank parchment, as if a map is yet to be drawn. The screen isn’t as cluttered as Assassin Moon, nor does it dive as deeply into the theme. The view here is pretty, though not as unique or as richly atmospheric as Assassin Moon where your imagination could more easily run wild through its world of espionage. Pirating games are common, so while pretty, Adventures of Doubloon Island is the less intriguing slot. 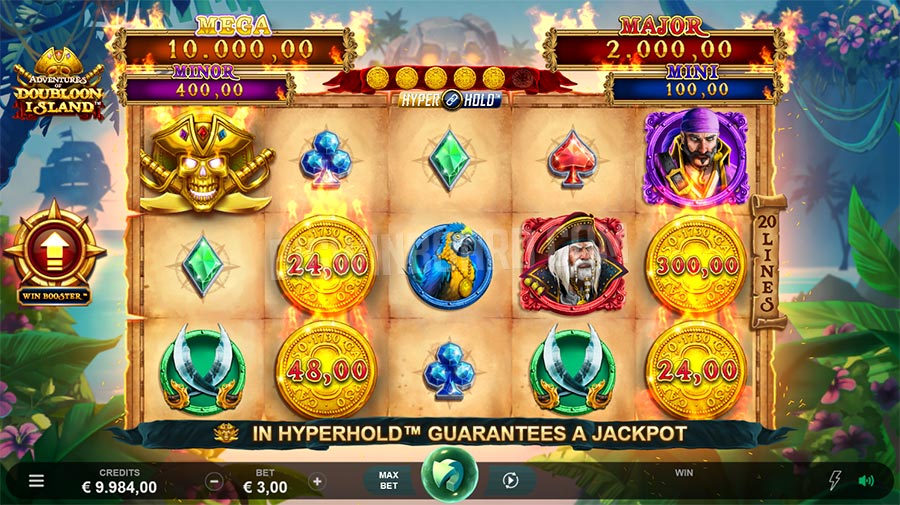 Above the reels, four fixed jackpots display their values, which adjust according to bet size and whether the Win Booster has been activated – doing so increases the bet. Medium volatile and with a 96.01% RTP, Adventures of Doubloon Island may be played on any device, where bets can be set from 10 p/c to £/€75 per spin.

There are eight regular pay symbols to line up - four high, four low. Lows are made up of sparkling card suits diamonds, hearts, clubs, and spades, while highs are a pair of swords, a parrot, and two swashbucklers. Five of a kind is what you want where premium values range from 10 to 20 times your stake. The lady buccaneer is a wild, appearing in 1x1, 1x2, or 1x3 sizes on any reel. Five of a kind are worth 50x the bet, which, if you’ve played Assassin Moon, is a massive reduction from 12,500x for a full screen, down to 1,000x.

While the features are similar as before, they have been toned down, making Adventures of Doubloon Island a less enticing proposal from a ‘win big’ standpoint. Thrills peak during the HyperHold feature, accompanied by free spins and the Win Booster.

The Win Booster is an optional function that increases the bet by 1.5x when activated. Doing so does not alter line wins, but it does boost the value of wins during the HyperHold feature. Cash prizes are increased by 3 times, and jackpots receive a 2-2.5x boost. Win Booster can be switched on or off at any time in the base game.

Landing 6 or more HyperHold symbols on the reels trigger the HyperHold feature. With 3 spins awarded, the triggering symbols are now held in position. Whenever new HyperHold symbols land, the spins are reset. The feature ends when either all positions are filled, or spins run to zero. In either case, the symbols in view then reveal a cash prize of 1-50x the bet if the Win Booster is off, or 2-100x the total bet if it is.

Initially, this is via the theme, which is personal, but it wasn’t as easy to go with the flow and lose yourself in Adventures of Doubloon Island like it was in Assassin Moon. Slots are awash in pirating themed games, so the initial grab wasn’t so pronounced despite having an attractive look. As such, Doubloon Island needs to work harder to differentiate itself, and here it falls a little short. Perhaps if its stats were more impressive it might have done so, yet they have been cranked back from Assassin Moon. Gone are the huge full-screen wild wins, and even the jackpots are less. It all adds up to a less tempting game all around.

If sailing the seven seas, plundering merchant ships, or raiding settlements isn’t your bag, there isn’t much point in having a crack with Adventures of Doubloon Island. Even then, once the ‘arr me hearties’ thing has worn off, lower potential means there is little left over to stick around for.