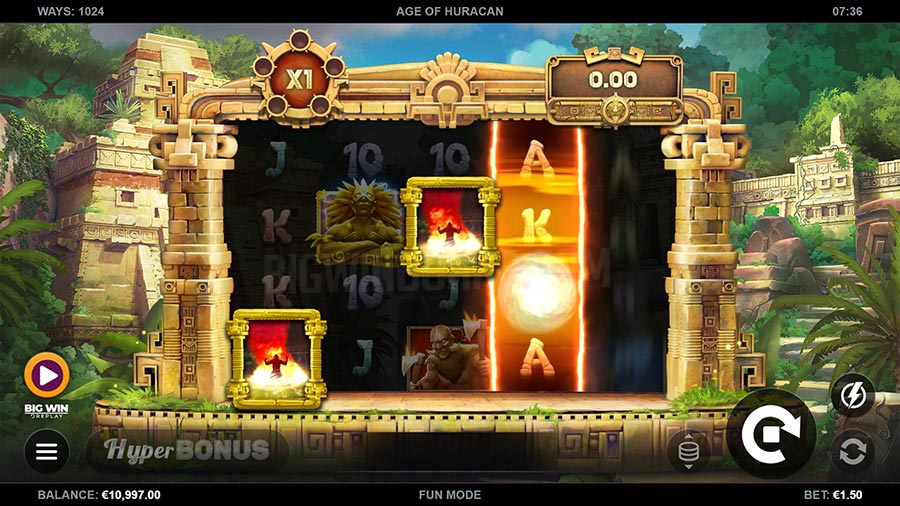 Before the year 2012, whenever you heard about the Mayans, prophecies about the end of the world probably weren’t far from your mind. It had to do with the Maya Long Count, pointing to December 21 (or 23), 2012 as some sort of end date. Fortunately for humanity, the cataclysm many had predicted, feared or hoped for, passed by as uneventfully as the Y2K scare did. Computers didn’t get confused, there was no planetary collision, and the sky didn’t rain down destruction. It was a pretty standard Friday like any other where people got up, went to school or work, then unwound after a hard week, and life went on.

Then again, perhaps the apocalypse is a drawn-out event that only kicked off in 2012? Time will tell. Until then, we’ve got Age of Huracan from Kalamba Games to give players a taste of what might come to pass. Huracán (Spanish for “hurricane”) was the Mayan God of Storms, and he brings plenty of those to one of Age of Huracan’s bonus games. As well as free spins, players seek glory via a K-Cash feature or hit the Hyper Bonus to shortcut to either.

Unless you’ve been following Kalamba Games like a Facebook stalker, you might not know Age of Huracan is the studio’s 50th slot. The game does look like it was designed by an experienced provider too, where a 5-reel, 1,024 pay ways grid is embedded in a nicely drawn jungle, full of verdant plant life and moss-covered temples. Age of Huracan looks nice, but hold out for free spins if you’re interested in the premise because Kalamba steps up the show when they hit.

Any device is fine for dodging the downpour, where stakes range from 50 p/c to £/€100 per spin. Mathematically, Kalamba has chosen to design a rather high-performance slot for their 50th release, marrying solid potential to a highly volatile game engine they’ve rated as 9 out of 10. Hit frequency is a tad lower than might be expected at 16.7%, though most players will be satisfied with an RTP of between 96.62% and 96.75% – the bonus buy options accounting for the variety.

On to the paytable, which throws up a few minor oddities around how symbols pay. One is the lowest symbol, and the two highest symbols pay out on two of a kind or more, while the rest need at least three to do so. Symbols start with 9-A card suits, then daggers, glowing green things, and four Mayan characters are used. The three least profitable characters pay 2 to 10x the bet for five of a kind, yet the top one stands out since it’s worth 100x for five. One final symbol before we head into the storms is the Mayan Calendar looking wild, substituting for all other symbols except the Bonus or K-Cash.

Kalamba has made a few adjustments to a hold & win feature, titling it K-Cash, and bolted on a round of free spins for a few more thrills. During the base game, blue or orange K-Cash symbols may land on any reel; Blue ones add a cash amount to the meter on the top right, orange ones fill a meter on the left with every 5 increasing the multiplier by 1, up to x5.

When 3 or more K-Cash symbols appear, they lock in place, and 3 K-Cash Spins are triggered. Each new K-Cash symbol locks and resets the number of remaining spins to 3. As before, orange symbols increment the multiplier meter. At the end, when spins run out or all positions are filled, the monetary amount collected is increased by the multiplier and paid out. In addition, full grid wins award a prize equal to 10x the bet, times the value of the multiplier meter.

The final extra is the HyperBonus, provided feature buys are permitted where you live. Players get three choices. One is 3 Cash Spins with a starting x5 multiplier for 21.2x the bet, or 8, or 15 free spins for 35.4x or 66.3x the total stake.

There are good things in Age of Huracan, but the features could have been jerked a bit harder to boost the game’s appeal. Up first, the way the K-Cash collector lets you build value before K-Cash Spins actually trigger is quite interesting. It adds a new dimension for hold & win fans to experiment with. What lets it down is the values aren’t amazing. For instance, the multiplier meter tops out at x5, while K-Cash symbols can be worth 4 times the bet at the most. Busting out a calculator means a full screen of symbols, with absolutely everything maxed, is worth 400x the bet. There is the Full Grid prize, yet still, don’t expect a gigantic total.

Other game phases don’t suffer the same underwhelming fate in regards to potential; tornado chasers will be pleased to know. Age of Huracan has a max win figure of 10,240 times the bet, which happens to be the same value as a full grid of the top pay symbol. Again though, free spins would have benefited from a modifier to make them more exciting than the base game. They’re utterly devoid of any extra interest; you can’t even collect K-Cash symbols when they are active. It’s almost a relief once free spins are over so you can get back to the base game and pick up where you left off.

As a 50th release, Age of Huracan in many ways sums up the Kalamba journey so far – great visuals, plenty of atmosphere, respectable stats, but head-scratching features. It wouldn’t have hurt if extra thought had gone into free spins and extra dough into K-Cash Spins. As it is, the result feels a little lumpy, a little lopsided, where a tweak or two could’ve made a big difference.

Features feel like an afterthought to aesthetics in a game where one or two adjustments would have significantly tightened up the whole experience.