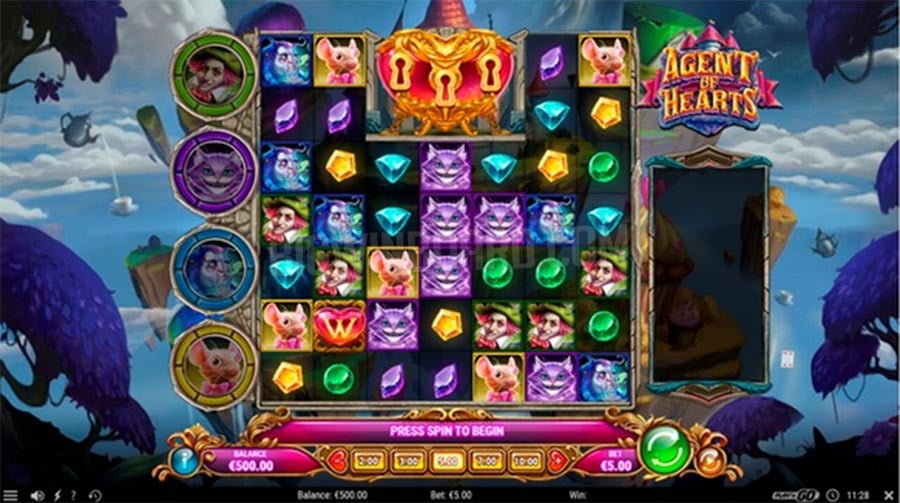 Editor’s note: This review evaluates Agent of Hearts based on its early access state and may still be under development. If necessary, we will update this review once it gets a full release.

Players, say goodbye to reality with developer Play’n GO as they trip down the metaphorical rabbit hole to design a Wonderland-themed slot titled Agent of Hearts. The studio certainly has a soft spot for Lewis Carroll’s story of Alice in Wonderland, evidenced by the several games they have set in the wacky country. This one, Agent of Hearts, follows previous releases such as Rabbit Hole Riches and Court of Hearts. Each has used very different layouts, features and rules, with Agent of Hearts being the first to offer a cluster paying grid setup.

One of the benefits of using Wonderland is all the sumptuous visuals on tap. Agent of Hearts is not as ornately designed as Rabbit Hole Riches, but the purple trees, floating rocks, teapots, cups, and cards leave no doubt about the magical nature of the environment. So do the characters, where we bump into several familiar faces from the famous story. Each character has become an agent, working with players to accomplish a specific mission, all laid out in the features section below.

Using a cluster pays mechanism, players win when 5 or more matching symbols are adjacently connected on the reels, unusually laid out in a 7-7-5-5-5-7-7 arrangement. Highly volatile, Play’n GO has rated this part of the math model at 8 out of 10, a characteristic amplified by the one-off nature of the central Queen’s Heart Free Spin feature. As ever, RTP is variable, so be on the look for the most generous version, generating a theoretical return value of 96.25%. Stake selection should suit most bankrolls, starting at 20 p/c, rising to £/€100 per spin, which is the standard PnG range.

Now for symbols, of which there are eight regular pays, half classed as low pays, made up of gems in various colours. The remaining half is the premium agent symbols where we come across the likes of the Mad Hatter, the Cheshire Cat, the Caterpillar, and the Dormouse. Values range wildly, where a cluster consisting of 15+ premium symbols triggers a payout worth between 40 and 1,000 times the stake. Moreover, wilds appear throughout, assisting with the clustering by replacing any pay symbol. 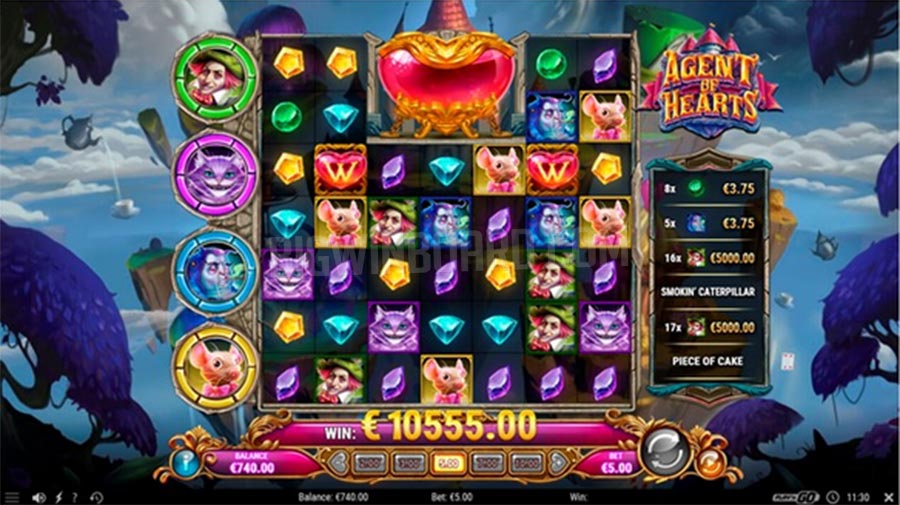 Players aren’t just back in Wonderland for the heck of it. Apparently, someone has stolen the keys to a safe containing the Queen’s heart. Since the heart holds the secret to the wealth and prosperity of the land, those keys need to be found.

The first feature on the block is the cascade system that removes winning clusters from the grid, filling empty gaps with new symbols, potentially leading to consecutive cluster wins. When no new wins hit, the next spin can take place.

The game provides an occasional second chance on non-winning spins via a Random Hearts Wild feature. Here, 4-7 wilds are randomly added to the reels, substituting all symbols, except for keys.

High pay agent symbols are collected when they create a winning cluster, and collecting 6 unlocks their respective feature. Alternatively, the White Rabbit may appear at random to instantly unlock an Agent feature. These features trigger after winning combinations and cascades finish. They cannot be retriggered and are awarded in a set order if more than one has been unlocked like so:

The other symbols you’ll come across in Agent of Hearts are keys. Collecting 3 keys in one spin triggers a Queen’s Heart Free Spin. This is one spin, which cannot be retriggered, that plays out all four agent features described above. Once cascades conclude, the Random Heart Wilds feature plays before a 3×2 Mega Wild leaps onto the grid, substituting for all symbols.

One of the concerns when revisiting the same theme several times is you have to come up with increasingly new ideas to keep it fresh. In doing so, studios can end up wandering down all sorts of odd rabbit holes in an attempt to be original. As such, the agent angle in Agent of Hearts seems a bit of a stretch, but hey, it provides a story while justifying a return trip to Wonderland. Searching for keys to the Queen’s stashed away heart might sound slightly odd, but this is Wonderland after all, and the mission ties the features together.

For a sharp adrenaline hit, it doesn’t get much more intense than winning one single non-retriggerable free spin for the bonus round. The fact that every other feature is mixed in pads a Queen’s Heart Free Spin out, though – with a Mega Wild thrown on top for good measure. Agent of Hearts can blow up, no qualms there, though it might have been more exciting if the four Agent Features did different things, rather than all more or less just remove or transform symbols. However, Play’n GO does know how to craft a quality grid slot, and Agent of Hearts gets as chaotic as you like it when its individual parts are firing – yet it relies heavily on the value of its elusive top symbol to achieve best results. As to rewards, a solid max win total of 5,262 times the stake waits for successful rabbit hole divers, with a probability of around 1 in a billion spins of occurring.

Using a theme as relatively common as Wonderland means a game has to work a little bit harder to make its mark. Agent of Hearts certainly doesn’t have the instant individuality of a Reactoonz, for example. Still, Agent of Hearts is more than capable of serving up thrilling moments and is as well-oiled as you’d expect from Play’n GO making it a good choice for some more madcap grid slot gaming with the tea party crew.

Agent of Hearts serves up some solid gaming that does the job but doesn’t feel like it stretched the design team to their limits. 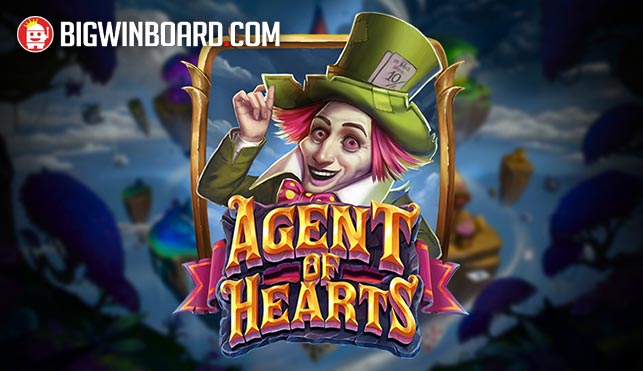