Demo play is not available in your region. Please visit one of the casinos listed below for free play.
Red Tiger

The spy game is a complicated world of cloak and dagger, but Red Tiger has chosen to keep their slot version relatively straight forward. While spinning for rather low rewards in Agent Royale, players get sticky wilds plus free spins as they take on femme fatales and disarm explosive devices. Located downtown, Agent Royale uses a viewpoint that looks like someone's passed out on the street staring skywards. Buildings on each side of the screen tower over a 5x4, 40 payline grid, while a couple of signs convey messages such as 'Win Now' or 'Good Luck'. It's a little cheesy, yet a bit of positivity never goes amiss.

On the aural side of things, the music and sound effects have a generic quality that could be used in absolutely any type of slot. There is something equally recognisable about the leading star of the show, Agent Royale, who is a dead ringer for English fashion model David Gandy. Maybe he's angling for a spot in a future spy movie and allowed Red Tiger to use his mug to plant seeds. In fact, the whole game has a familiar look, mixing parts of NetEnt's Hotline 2 with a touch of Red Tiger's own 24 Hour Grand Prix.

Players get their spy on by selecting bets from 10 p/c to £/€40 per spin, across any device. Don't expect to strap onto a highly volatile rocket ride playing Agent Royale despite having a decent enough bonus game. Return to player isn't exactly a selling point either at 95.77% RTP, but acceptable nonetheless. To Agent Royale's credit, triggering free spins wasn't the battle it can be in some Red Tiger games, though without the official bonus frequency to go by that might have simply been good luck.

Nine regular pay symbols occupy the reels, starting with five metallic 10-A card royals worth 1 to 4 times the bet for five of a kind. Things get a bit more glamourous amongst the premiums where we find dice, cocktails, sports cars, and bombs. Land five of these symbols on a payline to pick up wins from 2.5x to 4x the stake. Not massive values, mitigated to some extent by the features.

Secret agents, the ones in movies at least, always pack the latest gadgets whether it's a watch which doubles as a laser, or a key finder that explodes when the agent whistles the right tune. Always, the hero has the exact device needed to get out of the jam they find themselves in. In contrast, Agent Royale is rather light in the features department. This is an agency running on an austerity affected budget which has to make do with sticky wilds and free spins.

The first thing we need to cover are the 2 wild symbols. One is a regular 1x1 bomb wild, the other a 1x2 sized Agent Royale wild. Substituting for any of the regular pay symbols is their primary job. When the 1x2 wild lands on the same spin as bomb pay symbols, he attempts to defuse them. If he successfully cuts the wire, the bomb symbol is turned into the wild counterpart. It is then locked in place for one more spin. If on the next spin Agent Royale defuses more bombs, all wilds are locked for an additional spin.

The female seductress is displayed on the scatter symbol which may land in any position. It's hard to tell if she's a goody or a baddy, but the dragon tattoo on her back is a red flag. In any case, 3 scatters in view award 8 free spins. On the first spin, an Agent Royal wild is locked to the centre position of the slot. Also in free spins, each wild that lands in view and is part of a winning combination remains locked for the remainder of the feature and awards 1 extra free spin.

Despite the hazardous task of disarming bombs, Agent Royale doesn't feel dangerous at all. Quite the opposite, it comes across as a bit of light entertainment aimed at those who prefer mid-ground thrills rather than pushing lady luck to her extreme. Other than a modicum of spy glam provided by the two characters, it doesn't seem like too much passion went into the game's design either. Sound effects seem like they could have been bolted on any slot, and the rest of the graphics are okay, yet they don't stand out much.

As is often the case, the part Scottish part Swiss MI6 agent, can't help but crop up as a comparison. Where Bond was all about risking it all on the flip of the next card, Agent Royale isn't so extreme. Modesty certainly applies to potential where the most you can win is 1,760 times the bet. It's not exactly high stakes gambling with Hugo Drax at Blades.

Still, Agent Royale might be alright for a few spins to see Red Tiger's take on the spy genre. The base game loses some of its appeal once you've seen Royale turn a few bomb symbols wild resulting in meagre wins. Free spins hold more promise since wilds are sticky for the remainder of the feature possibly leading to full screens of them. A concern for some is since symbol values are quite low, a full screen of wilds is worth a scant 200x the bet.

Once Agent Royale has done its thing, maybe rolled through free spins once or twice, there is little reason to darken its door again. The game might be based on agent stuff, yet it comes across as the pushing pencils side of spy work rather than getting your hands dirty in field operations.

Causal players might appreciate the relatively safe environment to play spies in, others who like more bite in their gaming are unlikely to find it in Agent Royale. 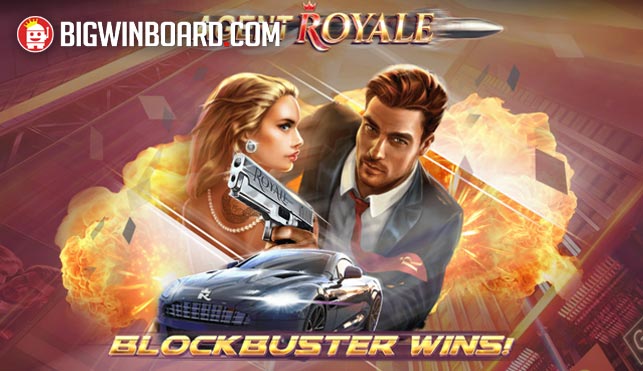