Developer NetEnt step up to give one of their older slots a Christmas makeover, with results which might surprise. Actually, the whole enterprise is a bit of a surprise from start to finish. The first ‘what the?’ moment is slot choice. NetEnt elected to give one of their least Christmassy slots you could imagine a makeover, the Hawaiian Tiki themed Aloha! Cluster Pays. Released back in 2016 and becoming somewhat of a hit with recreational gamers, it turned out to be ripe for a remake. The updated version is not only an interesting choice; its tuned up features make it playable any time of the year and for all type of gamers.

Aloha! Christmas Edition introduces us to a new part of the island this time around. The menacing volcano has vanished, replaced by a couple of clapboard buildings, one being a bar to get you in the mood. On the other side of the 6x6 grid is the big smiling Tiki guy, this time which a Santa hat on his head - just in case you forgot this is meant to be a Christmas slot. A groovy tune adds a final layer of island atmosphere.

Aloha! Christmas Edition is available on any device, where bets of 10 p/c to £/€200 per spin may be set. About the only negative change is an RTP dip to 96%, a fall of 0.42%. The trade-off is volatility has been cranked up with the addition of NetEnt's in-house developed MAX concept, along with a few other enhancements. Basically, the worn engine has been torn out and replaced by something with a bit more oomph.

What has stayed the same is the cluster pays system. As before, 9 matching symbols touching vertically or horizontally form a winner cluster. The symbols are practically the same too, aside from the appearance of even more Santa hats. From low to high are flowers, clamshells, coconuts, pineapples, plus a trio of masks in blue, green and red. Values of the three premium Tikis top out at 70-250x the stake for clusters of 22+. There is no regular wild as such, though one is created via the features.

When looking at features, the demarcation between the two Aloha slots starts to widen. At their core, we are talking about similar extras, but NetEnt’s tweaks make them quite different experiences.

Starting with Mystery Symbols which have received a boost. Mystery Symbols may appear randomly in both the base game and bonus, in any position. When landed, they all transform to reveal the same matching pay symbol. The new bit is that one of the mystery symbols can turn into a multiplier wild symbol. In the main game, this could be a multiplier of x2, x3, x4, x5, or x7. Multiplier Wilds substitute for all symbols except scatters and starfish.

Cluster wins in the main game can randomly activate the Sticky Win Respin feature. Here, the winning cluster in question, plus any matching symbols stick to the reels while the rest are respun. Respins continue to roll until no new matching symbols land. Then, at the end of the Sticky Win Respins, a multiplier is applied, its value depending on the size of the winning cluster, up to x7.

Look out for the postage stamp, wish-you-were-here type scatter. It can appear two positions high on any reel - land 3 or more to trigger the free spins feature. Players are presented with two options governing how the free spins are played. Option one is the Tiki Bar, providing 10 free spins using wild multipliers of x2, x3, or x4. Option two is the significantly more volatile Tiki Bar MAX, which comes with 6 free spins and wild multipliers of x4, x5, or x7. Players choose the most suitable volatility then hit ‘Select’.

Calling this a Christmas slot might seem like a teensy bit of a stretch. Aside from the random Santa hat, and some gifts on the beach, it’s not exactly bristling with seasonal cheer. Then again, it’s probably how Christmas is in that part of the world. Instead of grey skies, sub-zero temperatures, dustings of snow shutting down public transport, and runny noses, they get to bask on the beach having luaus while opening their presents. There’s no need for schadenfreude though, because Aloha! Christmas Edition is a good game. The alterations and additions have transformed it into a much-improved version.

Firstly, the graphical refinements are appreciated. The difference isn’t enormous, but it is a bit nicer to look at, which is always a good start. Better still, the feature upgrades make Aloha! Christmas Edition a more exciting proposal. Multiplier wilds shake up the Mystery Symbols along with the base game as a whole, occasionally transforming a decent win into a better one. Free spins have been transformed by the wild multiplier as well, and offering a standard or MAX version is a nice touch. The result is a more volatile experience (if you want) than before whilst also packing more potential compared to the original.

Having said that, landing even a 200x win proved to be an impossible task during testing in spite of having played over 50 bonus rounds. The slot gives plenty of play-time, but watching the balance slowly dwindle down for hours with no real chance of hitting big is not a fun proposition either.

It might not be super-seasonal, but Aloha! Christmas Edition’s revamped form makes it a more appealing option for harder-edged gamers. 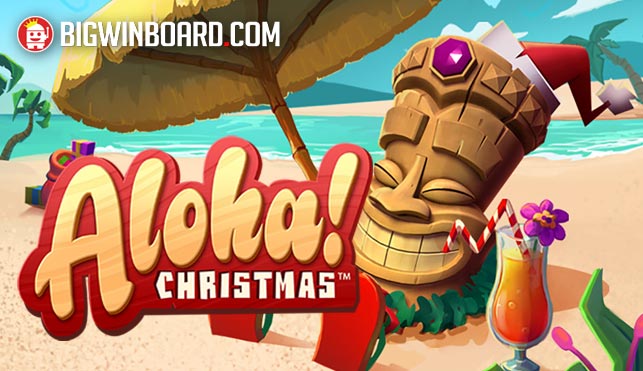