Players into the undead side of life will probably have heard of monster hunter Van Helsing, portrayed in the Universal Pictures film starring Aussie hard man Hugh Jackman. The movie was inspired by Dutch doctor Abraham Van Helsing, one of the more eccentric characters from Bram Stoker’s Dracula. In the book, Van Helsing was a vampire hunter who led the fight against Count Dracula and his various minions, notably, the freshly undead Lucy Westenra in a disturbing crypt scene. 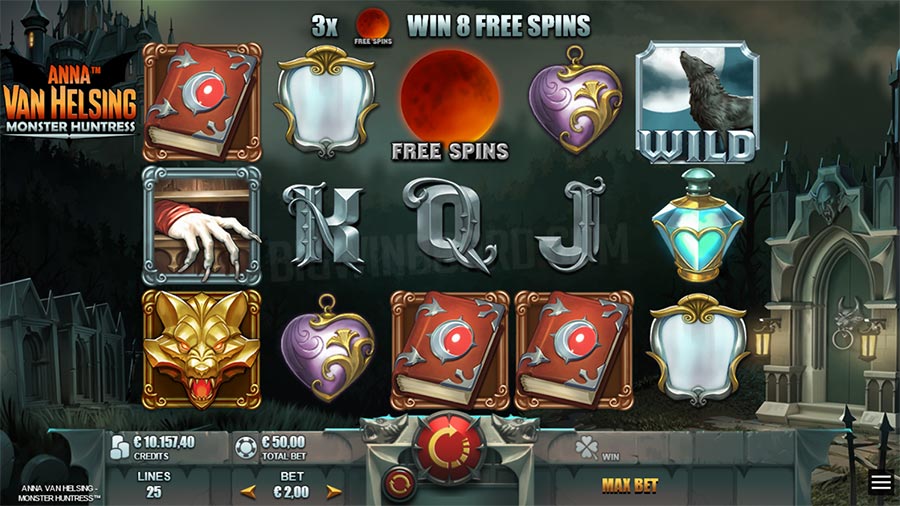 What you might not have known is the Dutch polymath apparently had a distant relative named Anna. Anna Van Helsing is also a monster huntress who headlines this darkly gothic-themed slot from developer Rabcat. If you're going to track down monsters, a graveyard is an appropriate place to start looking, which is where we find the game's 5-reel, 25-payline grid. When dealing with this particular subject matter, it's hard to avoid comparisons with Immortal Romance, the genre's gold standard. A few shades of the Microgaming classic appear, such as extensive use of full reel wilds, grey royal symbols, and an overall recognisable feel. Anna Van Helsing's fails to creep as hard though, and much of its atmosphere is provided by a semi-spooky soundtrack.

Players can load up silver bullets and stakes from 25 p/c to £/€150 on any device from mobile to desktop. Unlike the beasts the game portrays, its math model is a lot tamer. Volatility for a start has a medium rating, rounding off the game's edge to a degree. The nail in the coffin for hardcore players, so to speak, is the low potential when compared to its competitors. Other stats will be a lot more universally appreciated, such as an RTP of 96.18% and a hit frequency of roughly one win three spins (32.84%).

Symbols are in theme, and they've got a cartoon look about them rather than a realistic one, softening any horror. The first 4 are metallic royals J-A, then there's mirrors, hearts, perfume bottles, and a book as the mid pays. The 2 high pays finish the table off where we find a nailed hand reaching out of a coffin and a golden wolf's head. These last 2 are worth payouts of 15 to 18 times your stake for 5 of a kind. Higher returns are possible from wild combinations – up to 30x the bet, while also substituting any pay symbol.

There are some impressively named features in Anna Van Helsing that mostly revolve around expanding wilds in one way or another, joined by a triggered round of free spins.

First is the Wolf Howls feature, triggered when Van Helsing Wilds land on reels 1, 2, or 3. The Van Helsing Wild expands to fill the reel, and 1 bonus spin is awarded. Triggering Van Helsing wilds remain in place during the bonus spin, and Wolf Wilds, are more likely to appear. During Bonus Spins, the Wolf Attack feature may randomly trigger. When it does, all wolf wilds expand to fill their reels.

Blood moons are scatter symbols, and 3 in view award 8 free spins. During free spins, all wins are multiplied by x2. In the round, if the Dracula Wild symbol lands on reel 3, it triggers Dracula's Banishment. As you might have guessed, Dracula Wild expands to fill the full reel, then transforms into a Van Helsing Wild. In addition, Dracula's Banishment turns any book, coffin, wolf head, or wolf wild symbols into Van Helsing wilds.

Budding monster hunters who care more for lore, back story or grim settings at the expense of big numbers and heavy-duty math models might be happy to sink their fangs into Anna Van Helsing. It doesn't burrow as deeply into the theme as others have, yet Rabcat is good at painting pretty pictures, and Anna Van Helsing is nice to look at. Even thematically though, Anna Van Helsing comes off a bit tame, as if Rabcat weren't overly excited about walking too far on the wild side.

Whatever the case, it results in gameplay that isn't hugely thrilling. The base game predominantly passes by in waves of low to no wins, interspersed with Van Helsing Wilds now and then producing payouts in the 20x region if you're lucky. Free spins turned the heat up slightly, though after seeing what it could do once, there was little dragging us back for another bout of monster slaying. After a few lousy bonus game wins, you'll be face-palming the same way The Count does at the end of each free spins round.

Not saying good things can't happen in Anna Van Helsing, but if the game doesn't do something early on to capture your attention, you’ll start wishing you'd loaded a similarly themed game such as Nolimit City's Book of Shadows or the aforementioned Immortal Romance. Maybe huge winning potential might have saved Anna Van Helsing, but again, modest numbers arise. The most you can win is €225,000, which sounds alright, but when max betting, that works out at a so-so 1,500 times the stake.

For those after a taste of the dark side, but not too much, Anna Van Helsing might be an okay game. It is lite in almost every regard, so players who want a slot that gets their pulse racing or prickles a few hairs on the back of their neck will struggle with Anna Van Helsing Monster Huntress.

Anna Van Helsing is monster hunting for players who don’t want to be too spooked too hard, or thrilled too hard either for that matter. 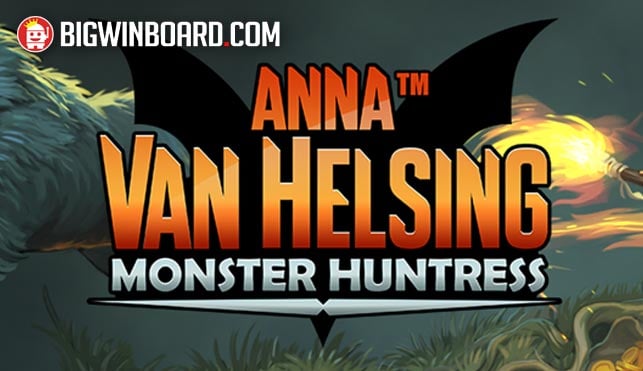