Launched in mid-2018, Gold Coin Studios release their first slot, Arthur’s Gold, in partnership with one of the titans of the industry Microgaming. Led by an ex-IGT Vice President, this Reno-based studio brings with it plenty of experience, though details are still light. For now, let’s content ourselves with their new slot based on the old tales of Arthur, his knights, the round table, and apparently, his bags of gold.

Scribes of yore must have glossed over this, but Arthur was pretty cashed up as evidenced by the mountain of coins onscreen. Most people will probably recall Arthur’s search for the Holy Grail rather than amassing a fortune, but that’s okay, coins it is. Someone at Gold Coin Studios clearly has a thing for them so let’s roll with it.

The influence of land-based slots at IGT appears to have leaked into the development of Arthur’s Gold which has a slightly classic vibe to it. Booting up the slot instantly made us think of Edict’s Dragon’s Treasure. The rest of the background is taken up by an old hall which can be seen on the edges of the 5-reel, 3-row grid. The user interface is kept neatly out of the way, where stakes can be set by hitting the +/- buttons for spin costs of 20 p/c to £/€50.

You never feel lonely playing Arthur’s Gold because so many characters appear on the grid. Double premium symbols amplify the effect, so instead of having one Arthur on a symbol, you can have two like a twin or a doppelganger. Along with Arthur, players spin Merlin, Guinevere, Lancelot, and Viviane as the high pays, with J-A royals as the low pays. All symbols need to land least three of a kind on one of the 20 paylines to trigger a payout.

As mentioned, the high pays can appear doubled up which has a dramatic effect on the value of a win. For example, all of the high pays are worth 2.5x the stake for a line of five. However, when doubled to 10 of a kind, their values increase to 50x - 125x the stake. It is similar to the effect Just for the Win used with Tweethearts and the clone Double Lucky Line, but in Arthur’s Gold, double symbols can land in any position.

The game also comes with two wilds - a standard wild and a special wild that only appears in the bonus game. Wilds not only substitute for any regular pay symbol, but 2, 3, 4, or 5 of them on a payline are worth 2x, 6x, 30x, or 500x the stake. Critically, wilds count as double symbols when they substitute for the high pay symbols.

Some positive numbers are called forth from the math model to do Arthur’s handiwork starting with an RTP of 96.19%. Hit frequency is quite high, at 30.21%, or a little shy of 1 in 3, so wins do turn up on frequent basis. You’ll need them to do so since the majority of winning combinations are low value unless double symbols are involved. The math model is highly volatile and the game is capable of dealing sizeable wins when it’s on, which generally happens during the features.

The best way to get your hands on some of those coins is by triggering the Arthur’s Gold Free Spins Bonus. This occurs when 3, 4, or 5 treasure chest scatters land to award 2x, 5x, or 10x the stake plus 10 free spins. During free spins, a new special wild enters the game which may land on reels 2, 3, or 4. When it does, it expands to cover a full reel and triggers a respin.

If another special wild lands on a respin, it expands and is locked for another respin. Up to 3 consecutive respins are technically possible and do not reduce the number of free spins. The final rule is Scatters appear only in the base game, so it is not possible to extend or retrigger the bonus game.

Last is the Double Up feature where players can guess the result of a coin toss to double (or nothing) any base game win or the total amount won during free spins. The Double Up is available once for each win as long as the current win does not exceed £/€5,000.

So does Arthur’s cup runneth over to reward those he deems worthy? To an extent, it does. Expanding wilds aren’t exactly new, but they work well with the double symbols to produce larger than usual combinations for agreeable results. Thankfully, since wilds count for two high pay symbols they are convenient for not only putting together 5+ combinations, but knocking out plenty 3 or 4 symbol combos that keep the action and bankroll ticking along.

Casting your eye to the immense pile of treasure onscreen leads to one question - what’s the potential in Arthur’s Gold? At over 4,000 times the stake, decent wins are possible, though not quite the hall of gold coins alluded to.

All told, Arthur’s Gold is a fairly solid first release to be featured here from Gold Coin Studios. Effort has gone into most aspects of the game without the developer explicitly favouring one element over another. One possible sticking point could be the target audience not getting too exciting about the potential.

Those that identify as ‘high volatility players’, as Gold Coin calls them in their sales pitch of the game, might give pause to max wins some may perceive as modest, although the volatile swings are undoubtedly there to offer both thrill and excitement.

Arthur’s Gold covers the basics while offering features and gameplay that might appeal to ‘high variance players’ players. Those looking for something more refined and modern should probably pass. 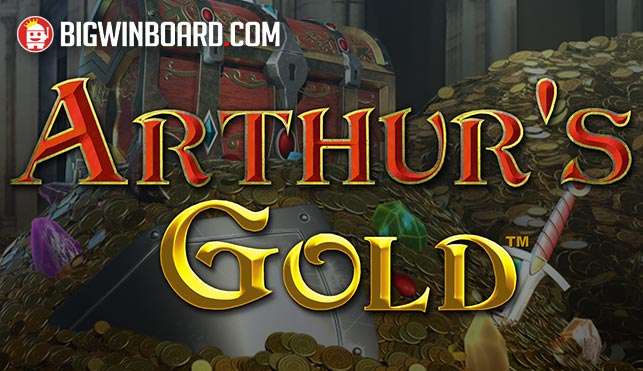