Cerberus' Inferno offers up more of the same in the Beat the Beast series, albeit with possibly the least exciting features of the range so far.

Beat the Beast: Cerberus' Inferno is the third instalment in Thunderkick's five-part high danger series of slots. Each one stars a different beast, paired with classic gaming, strong math models, and solid potential. If the heat of the second one, Secrets of the Sphinx, wasn't enough, Thunderkick has increased the temperature by several thousand degrees. Beat the Beast: Cerberus’ Inferno takes place in the mythical Greek underworld, Hades, with the star of the show a spooky three-headed dog.

No, we're not referring to Hagrid's pet Fluffy who guarded the entrance to The Chamber of Secrets, but the original Greek one Cerberus. The hound of Hades, as he was known, also had three heads, but was employed to prevent souls from leaving, rather than stop anyone entering. Maybe the ancients couldn't enter the underworld, but modern slots players have no such difficulties here.

On entering, it's clear you are playing a Beat the Beast slot. Thunderkick has stuck to the same classic 5-reel, 3-row format as the previous two, using 9 paylines in the base game to line up winners. Playable from the usual 10 p/c to £/€100 per spin, the gameplay is as uncomplicated as ever; the key is landing matching symbols on a payline from left to right for a reward.

The low pays remain consistent throughout the series, being a bunch of stone/metallic looking 10-A royals. High pay symbols make more use of the individual theme, meaning icons from Ancient Greece. In ascending order are sceptres, helmets, vases, a golden statue of Cerberus, and an angry blue Cerberus. When it comes to combinations, low pays need at least 3, while high pays only need 2 to be worth something. The best value is the Cerberus symbol at 150 times the stake for five of a kind. Quite high symbol values across the board really.

Wilds come in handy, but they are somewhat tied to the features so we'll look at them in the next section. Before then, let's inspect the stats, which like others in the Beat the Beast series are aimed at more dedicated gamblers. First is the RTP which is higher than the previous two (ever so slightly) on 96.15%. Along with the beasts onscreen is the beast that you can't see, which is an allusion to the highly volatile math model. Thunderkick's aim with the series is to produce a high volatility adventure, and Cerberus' Inferno certainly continues the tradition.

Cerberus' Inferno isn't exactly inundated with features, but it does come with two wilds. The first is a more standard wild which can substitute for any of the regular pay symbols to form a winning combination. It only appears stacked, covering a full reel to help improve the win rate.

The second wild is the Golden Cerberus Emblem which, not only substitutes for any other pay symbol, this special symbol also has a dual role with its second task as the scatter - 3, 4, or 5 scatters in view award 2x, 20x, or 200 times the stake as well as 10 free spins.

In the Free Spins game, the 9 paylines are replaced with 243 win ways. This means, 3 or more symbols of the same type, left to right, in any row, from reel 1 constitutes a winning combination. Aside from this, the rules of the base game apply, so 3 or more scatters retrigger 10 free spins.

If you have played either of the first Beat the Beast slots you will have a good idea of what to expect from Cerberus' Inferno. Each is similar in core, looks and gameplay, though thematically completely different. Theme wise, Cerberus’ Inferno is more unusual, so players after old school gaming in a different environment might be interested. Krakens and Sphinx’ abound in slots, though Cerberus is a little harder to come by. Makes you wonder what will possibly rear up in the fourth and fifth Beat the Beast games.

If you liked the first two, then there is no reason why the third won't float your boat either. Thunderkick has stuck to the classic formula and produced a very simplistic game. Some might argue too simplistic as there isn't a whole lot that hasn't been done many times before. The other two high danger slots offered slight tweaks to their features, but Thunderkick has done away with any wizardry at all in Cerberus' Inferno.

Out of the first three, it's the plainest when it comes to features. The bonus game's claim to desirability is its 243 win ways, but there are hundreds of other slots already offering the same mechanic - during their base as well as bonus games. Of course, if you want to play something basic that waves the classic slot banner proudly, this is it. The other sweetener is potential. At 6,666 times the stake there are substantial rewards here – less than Kraken's Lair perhaps, but more than Mighty Sphinx.

Like others in the series, Cerberus' Inferno doesn't introduce anything particularly new or super exciting. Instead, it's straight forward, dependable gaming, packing reliable features and decent potential on top.

At the end of the day, though, it's hard not to feel a twang of disappointment. The series started relatively strongly, bursting with promise, but has seemed to dwindle as it's gone on. As a standalone, Cerberus' Inferno is a fine enough option, but Thunderkick kind of needs to step it up a bit next time to prevent the high danger series becoming a missed opportunity that fades into an irrelevant obscurity. 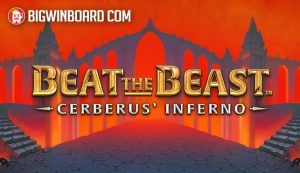 This one feels kind of pointless. I get that they want to keep things simple and stupid in this series but this looks so bland.