If a studio has designed a couple of highly successful fishing themed slots, what could they do to differentiate a new release from those that preceded it? If you're Pragmatic Play, you pull out the highest paying float symbol and replace it with a big-wheeled truck. That might sound odd at first, yet it kind of makes sense as the slot in question, Big Bass Splash, is all about loading your gear into a Mega-truck and heading to the water's edge to cast off. What it means for players is a chance to relive Big Bass Bonanza, with monster trucks, a new scatter assist feature, and greatly enhanced potential.

There have been a few visual alterations as well while we're at it. Thalassophobics will be happier to note the action does not take place way out at sea but nearer the shoreline. Well, you can see the shoreline in the upper part of the screen, a short paddle away, at least. The game grid remains underwater and, as before, consists of 5-reels, 3-rows, and 10 paylines for landing regular line wins across. There have been a few minor visual shifts, yet the game shares the same angling, Fishin' Frenzy-like atmos as previous games in the Big Bass range.

It also has the same default RTP as the non-Megaways versions, which is a good thing, as the highest level is a healthy 96.71%. In regards to the math model, Big Bass Splash gets a 4/5 rating for volatility and comes with the biggest potential of the lot – surpassing even Big Bass Bonanza Megaways. The stake range has remained the same, so players can choose bets of 10 p/c to £/€250 per spin and use any device they prefer to reel in some pixelated fish.

Normal wins occur when matching symbols land left to right, starting from the leftmost reel. For the most part, the symbols are the same, with the exception of the highest value one. This time it's a Mega-truck, worth 200x the bet for five of a kind, followed by fishing rods, dragonflies, tackle boxes, and any set of fish money symbols, paying 100 down to 20 times the stake for five. Rounding out the bottom of the paytable are the 10-A playing card symbols, and landing five of these triggers a payout of 5-10x the bet. Don't expect any help from the wild in the base game, as it can only appear when the bonus round is active.

Line win values are pretty decent, yet the action in Big Bass Splash really kicks off when the bonus round is triggered. This occurs when 3, 4, or 5 scatter symbols are in view, awarding 10, 15, or 20 free spins, respectively. In a new move, when 2 scatters are in view, there is a chance a random feature brings another scatter onto the reels. If the 2 scatters can move down a position without falling off the grid, they do so, and non-scatter bearing reels respin. Alternatively, a hook may pull one of the reels up for a chance to land the third scatter.

During free spins, the wild fisherman symbol can appear on all reels. One thing he does is substitute pay symbols to help link winning lines. Secondly, if the wild lands at the same time as fish symbols, he collects their cash value and awards them to the player. Wilds are also collected above the reels. Every time 4 wilds are collected, then +10 extra free spins are awarded and a multiplier is introduced. The multiplier is applied to any cash values won from the fish money symbols. The multiplier is x2, x3, and x10 for levels 2, 3, and 4, respectively. Once reaching level 4, free spins cannot be triggered again.

Two more random features complete the bonus round. If a wild lands with no fish money symbols in view, there is a chance fish symbols appear in random cells on the reels. Vice versa when there are fish symbols present but no wild. In this instance, a wild symbol may randomly appear to collect their values. Lastly, applicable players may be able to buy the free spins round for the cost of 100x their bet. 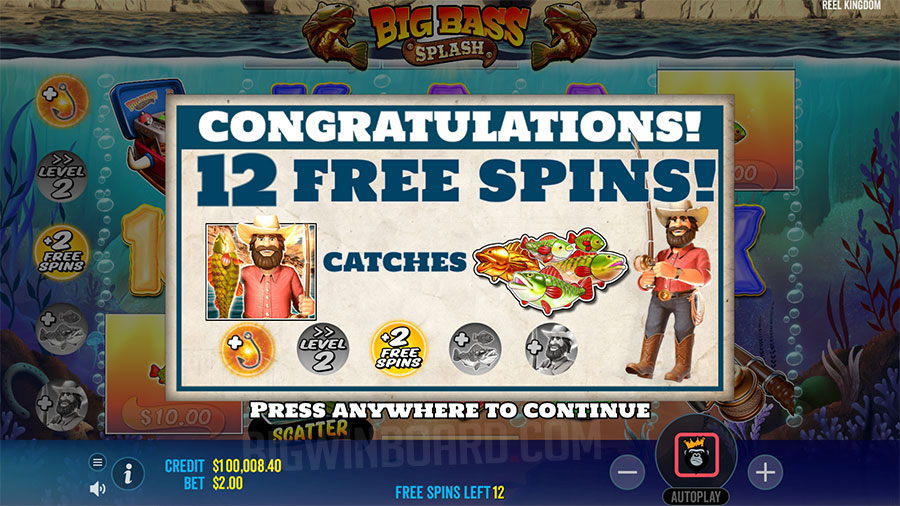 If you're under the impression Pragmatic Play is milking the daylights out of Big Bass/Bigger Bass Bonanza for all its worth, you're not alone. Fair dues, though. The formula has proven hugely successful, and there can't be a much quicker turnaround time than doing a samey reskin, tinkering with a feature or two, and zing, you've got a 'new' slot to sling out. We're not trying to be facetious here, as most of the changes in Big Bass Splash are slight. There is the new two scatter feature, but like swapping the highest paying float symbol for a Mega-truck, it's hardly a major overhaul.

So if you're not interested in big-wheeled vehicles or fishing from the shore rather than out at sea, what's Big Bass Splash got going for it? For one, there is now a bonus buy option available, yet the biggest draw here is definitely the max win. Not that the 2,100x available in the original slot was a deal-breaker for the many players drawn in by the opportunity to catch fish money symbols. We were also expecting more than the 4,000x offered in the Megaways version as well. This time, Pragmatic has eased off the win cap, letting it go as high as 5,000x the stake, pushing Big Bass Splash into more alluring territory than ever before. What's up for grabs might not be astonishing in the grand scheme of things, but BBS's max win is sort of like Croesus by Big Bass Bonanza Standards.

Other than the chance to score a larger catch than any of its predecessors, Big Bass Splash is business as usual. No getting around that. As such, players thrilled by the idea of another fishing themed money symbol collection slot with larger potential should be intrigued. On the other hand, those queasy at the thought of yet another one of these sorts of games might be prone to a virtual form of Big Bass seasickness.

While little of the gameplay and theme has changed; Big Bass Splash’s greatly increased win cap could be just the right bait to lure keyboard anglers back for a crack. 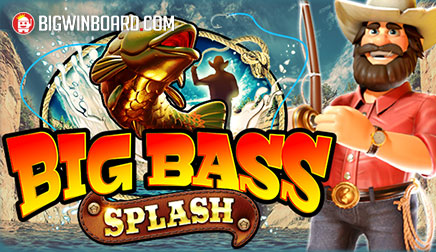 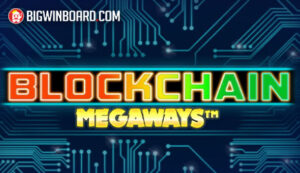