Back in 2019, developer Stakelogic released their first Megaways powered game, the oil-enriched slot Black Gold Megaways, a Western/oil themed game steeped in features. A stack of studios have acquired licenses from Big Time Gaming to join the Megaways bandwagon, but they don't always offer the same sense of originality on debut as Black Gold did. Doing a sequel has given the studio a chance to return to the oil fields; revamp it, and keep the things they liked while upending the rest.

The first change is the game grid has shifted from a rocky canyon to a production facility where the black gold is refined. There's a noticeable shift in tone as well, from the bright, bubbly vibe of the first, to a serious, almost Dead or Alive 2 feel for the sequel - both in terms of visual style and colour palette. Black Gold 2 Megaways is darker and more business orientated than the original, with a stronger emphasis on muscling into the oil industry while spinning its total of 8 reels.

That's obviously more reels than a typical Megaways game has, where, from top to bottom, there's a bonus reel, the usual horizontal 4 symbol reel, and 6 main reels, the latter dropping 2 to 7 symbols on each. An unpredictable number of symbols lands on each spin, producing 324 to 117,749 ways to win. Wins occur when matching symbols land adjacent to each other, left to right, from the first reel.

As sequels tend to do, the studio has pumped up the max win, and increased volatility in the process as well. Black Gold 2 Megaways' volatility is now rated high, at 5 out of 5, while RTP has dropped ever so slightly to 96.01%. Any device is fine for hosting Black Gold 2 Megaways, where players choose the stake that suits best from 20 p/c to £/€20 per spin.

The paytable has had a minor shuffle of the premium symbols, made up of lanterns, a hard hat, a donkey, and an oil baron – worth 1.5 to 50 times the stake for six of a kind. Low pays remain 10-A card royals, designed in a classic Western font. One last symbol for this section is the dynamite stick wild, replacing any regular pay to complete a win.

If Black Gold Megaways was a feature-phile's dream, then part two is even more so. Extras start with a Super Stake option, then continue through cascades, Bonus Reel modifiers, free spins, a Gold Rush bonus game, a gamble option, and a feature buy. Deep breath, let's do it.

The Super Stake is a common option now, which wasn't around when the first Black Gold dropped. Engaging it doubles the stake, allowing a special Super Stake feature to occasionally trigger. That was the vaguely worded description provided in the help file. In practice, the Super Stake causes the Bonus Reel to award modifiers more frequently. Officially, switching the Super Stake on does not affect the RTP value of the game, however.

When a new modifier lands on the upper bonus reel, valves below the reels open up and squirt oil over them. When the black gold clears, the modifier's effect is applied:

Free spins are triggered when 4 or more scatter symbols hit to award 12 free spins, plus 5 extra for any additional scatter on the reels. The bonus reel remains active during free spins, and a win multiplier is added to the mix, increasing by +1 following cascades. Players get 4 choices of bonus round – 12, 8, or 6 free spins with the win multiplier starting at x1, x5, or x10, respectively. The fourth is a mystery option which combines free spins and multipliers from the previous three choices. Landing three scatters in the feature awards 5 extra free spins, plus five for any scatter over three.

Gold Rush is the name given to the other bonus game, triggered when at least 4 bonus symbols are in view. The round starts with 3 respins where only bonus money bag symbols displaying multiples of the bet or blank cells land. Bonus symbols reset the spin counter, and the following modifiers may appear on the top bonus reel:

Once all positions are filled or spins run out, the value of all bags on-screen are tallied up and awarded.

Players living in territories where feature buys are permitted may be able to buy either of the bonus rounds. Deducting 100x the bet from the balance is the cost, where players can choose either free spins or the Gold Rush bonus.

One more extra for the road is a gamble feature, accessible every time a win occurs. Guessing the correct colour or suit of a face-down card doubles or quadruples the win, respectively.

Well, no one's going to accuse Black Gold 2 Megaways of being a feature-poor game any time soon. The original was already busy enough, and Stakelogic has piled on even more for the sequel. Black Gold 2 Megaways is not a complex game, rather one that boasts a number of modifiers to keep you on your toes in the base and bonus games. It's not exactly a paradigm shift, yet it is a well-executed sequel that builds on the original in practically every way.

One of the biggest changes is an attitude adjustment. This time, Black Gold 2 Megaways is a darker, heavier, more serious game than the original. This means grimmer visuals and a more volatile math model, coupled with a larger potential as well. Players who like options will appreciate the fact there are two ways of tapping the big money this time, too, as well as four free spin choices. Free spins could have been a regular Megaways affair with a progressive multiplier on board, yet the inclusion of all those modifiers keeps you guessing.

The Gold Rush bonus is another welcome addition, but since it's not the central showpiece as such, it's not quite as developed as archetypal hold & win games like Money Train 2 or Fire in the Hole xBomb. The Gold Rush feature has plenty to it, with several special symbols improving money bag values, but it didn't tend to dazzle during the review.

Black Gold 2 Megaways ends up being a big, overstuffed sausage of a game, oozing features. It looks good; there's an enjoyable entrepreneurial vibe and loads of Megaways driven action to get stuck back into.

In Black Gold 2 Megaways, Stakelogic uses the proven method of expanding every element of an original game to build a much bigger sequel in every regard. 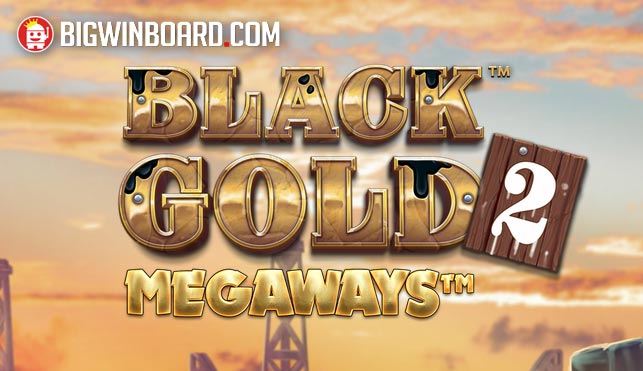