Demo play is not available in your region. Please visit one of the casinos listed below for free play.
Big Time Gaming

It took a brief Google search to confirm Blirix isn’t in some up and coming animated film, book, or tv character, but rather, someone Iron Dog Studio has dreamt up to star in one of their slots. Blirix Workshop is based on a quirky scientist engaging in a spot of alchemical transformation. He’s got a handy spell book conjuring up a bunch of modifiers when it appears, as well as awarding free spins when he himself shows up on the reels. Yeah, it is one of those quirkily themed games that’s cute, yet one where features often frustrate as much as they thrill.

Blirix’ actual workshop certainly is a cosy place to hang out and try your luck. A bubbling blue cauldron projects a 5-reel, 15-payline action area on the screen, making it look like it is floating in mid-air. Around it, a cat lounges in an armchair as a mouse keeps his distance on the opposite side of the screen. Beneath him, potions brew, while skulls, books, and parchments litter the rest of the room. A magically minded soundtrack lays a bit of fantasy on to the scene, which ends up being a rather warm one.

Mixing up a potion is possible on any device, from mobile to desktop, by selecting stakes from 20 p/c to £/€20 per spin. Blirix Workshop is not one of Iron Dog’s high power slots by any stretch, let’s get that out there now. Medium volatility plays a part, as do low-performance features and meek wins. We’re used to a bit more grunt from Iron Dog to be honest, but they can’t all be whimsical brutes. Blirix is a lot lighter, suiting a different sort of audience than those who appreciate Iron Dog’s more tightly wound Megaways slots, for instance. On the other hand, the 96.0% RTP should be acceptable for most.

Winning combinations of three to five matching symbols are possible, left to right from the first reel. Opening up the paytable we find red, green orange, and purple pieces of jewellery as the low paying symbols, while lanterns, hourglasses, a potion tub, and a pipe are the highs. Landing a line of five high pay symbols is worth a payout of 4 to 15 times the stake. Keep an eye for the symbol which bears a resemblance to Audrey Junior from the Little Shop of Horrors. This one’s wild, substituting all non-special symbols and expanding to cover all positions if it lands on the bottom row. If the wild is awarded via the Book of Spells (covered below), it also brings an x2 multiplier into play.

One integral symbol is the Magic Book, appearing only on the third reel. It’s wild for one, while also triggering the Book of Spells feature when it lands. When active, a book overlays the screen, and a modifier is randomly selected from its pages. This could be a symbol transformation, extra wilds, or a multiplier up to x5. When spells are awarded, they come with a strength rating of 1-4, where higher ratings lead to greater rewards.

Despite the modifiers, nothing really happens until free spins are triggered. This occurs when 3, 4, or 5 Blirix scatters land to award 10, 15, 20 free spins, respectively, or by using the bonus buy option which also increases the RTP to 96.4%. In free spins, symbols on the third reel get collected in the cauldron. Collecting 15 symbols triggers the Cauldron Combo Bonus. Here, the symbols in the pot are placed on the reels for a new win evaluation.

During the feature, book symbols have a bunch of extra spells they can produce. These can convert low pay symbols in the cauldron to highs, add wilds to the cauldron, add more free spins, or introduce a global multiplier. Don’t forget, spells available in the main game are available here too. Lastly, if 3, 4, or 5 scatters land, 5, 10, or 15 free spins are added to the total.

Well, it’s a shame Blirix couldn’t have perfected his modifiers and features more because they feel like they’re still in the prototype phase. Extra eye of newt or toe of frog might have added a bit more pep. Let’s start with the modifiers which have two inherent issues, or annoyances might be a better word. The most concerning is that they don’t do a lot of modifying when called into action. The other irritant is triggering a modifier which doesn’t do anything at all.

For instance, when receiving a multiplier for a certain symbol type, yet having no combination on the reels to apply it to. Yet you still have to sit through an animation to find out you’re not getting anything. It’s a shame because Blirix Workshop’s endearing looks crate a warm environment, yet any goodwill quickly erodes after waves of ineffectual features wear away at your patience. Free spins do increase the pace, there are more spells, and better returns are possible, but they require next level patience to trigger. When activated, you better hope they go some way to restore your battered balance.

Blirix Workshop could have been better if the features were more potent, free spins triggered more often, or the base game wasn’t such a drag. However, the crowd this is aimed at may very well lap it up anyway. If spinning reels in an adorable environment is the only goal, then Blirix makes an ideal choice. If however, slowly animated features leading nowhere makes your blood curdle its best to give Blirix a miss.

Charming looks starts Blirix Workshop off on a positive note, but is quickly devastated by ineffectual features and a general lacklustre nature. 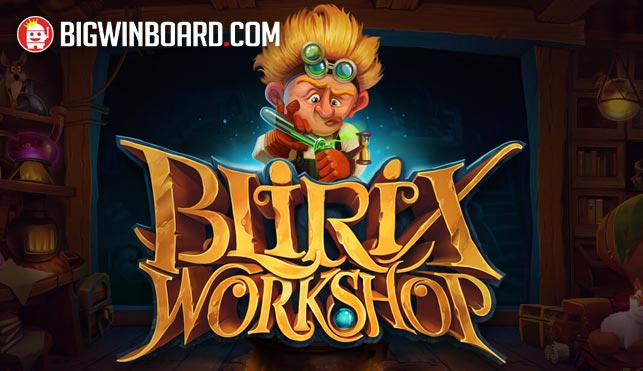