Near the end of 2020, Stakelogic and Hurricane Games teamed up to journey through a sweet strewn environment in a game titled Candyways Bonanza Megaways. As well as being a bonanza of candy, the game was played on a smaller three-reel Megaways matrix, packing in big multipliers to help compensate for a lack of cascade feature. For the sequel, the action is played on a more conventional Megaways game grid, cascades have been added, and if it was the multipliers that made the first so tantalising, fans should be thrilled to know they have not been sacrificed.

The view has largely remained the same, with a snow cone, soft whipped ice cream, candy floss type landscape going on. It's a view anyone familiar with the sweetie genre will be well acquainted with since it's become practically mandatory when designing a candy slot. So is the home keyboard style backing track, innocuously bopping along in the background, adding little more than a gentle aural tickle. 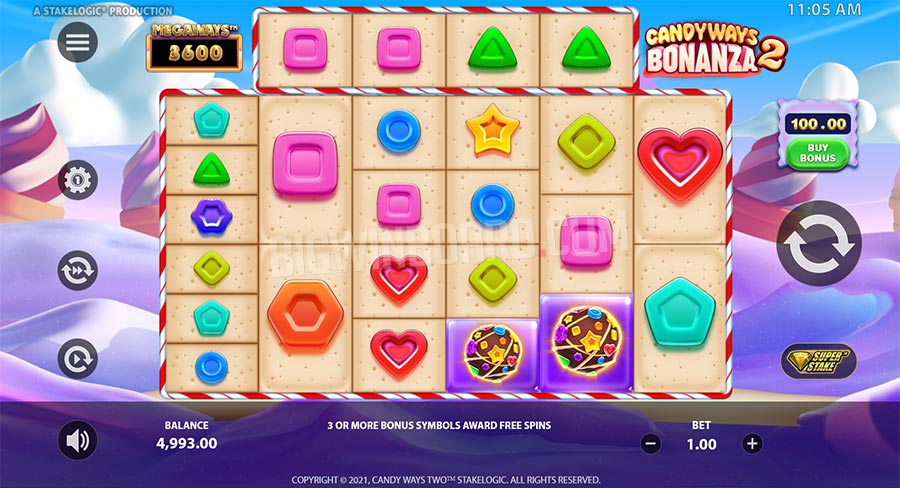 What has changed is the grid sitting in the middle of the candy paradise. This time, it comprises 6 main reels holding anywhere from 2-7 symbols each, plus a 4-position bonus reel on the top. The number of symbols in view changes on every spin, creating up to 117,649 ways to win. In addition, when symbols create winning combinations, they initiate a cascade feature that was not there before. Another alteration is a lower return to player value of 95.81%, while volatility is high. Stakes can be set in two ways. First is the base bet, ranging from 20 p/c to £/€20 per spin, then there is the optional Super Stake which doubles the stake when activated. Doing so increases the number of scatter symbols present on the reels, doubling the chance of triggering free spins.

It's candy all the way on the paytable, though the symbols' plasticky look isn't overly mouth-watering. There are ten of them, all similar-looking, so it's hard to tell which are low pays and which are high. As a rule, keep an eye out for the red, dark blue, and yellow ones; these are worth 2x to 12x the bet for a six of a kind combination. The remaining lot are worth 0.6x to 1.5x the bet for six of a kind. There is a wild symbol appearing on any reel, but it only enters the fray when the mystery feature is triggered. Wilds replace any pay symbol in the game.

Triggering free spins is the ultimate goal in Candyways Bonanza Megaways 2, occurring when the requisite number of scatters hit or by buying them. Free spins are where multiplier symbols are introduced, while mystery symbols may show up at any point on the top reel. Mystery symbols transform into a random pay symbol. Then, the chosen symbol and all instances below it on the main reel become wild.

Sweet covered chocolate objects are the scatter symbol. If, at the end of a cascade sequence, 4 or more scatters are in view, then free spins are awarded. This time, players are able to choose the free spin bonus round that suits them best from three options:

During the feature, multiplier symbols may land bearing values as mentioned above. After cascades end, all multiplier symbols in view are added together and applied to the win for that free spin. Keep in mind these symbols are not in any way wild. The last point is if 4 or more scatters land in view, the initial number of free spins is rewarded.

The standard Stakelogic gamble feature has also been bolted onto Candyways Bonanza Megaways 2. Following a win, players may be able to gamble their prize. Correctly guessing the colour of a face-down card doubles the amount, while picking the correct suit quads it. However, wrong guesses mean you lose the lot.

Getting on a positive roll in Candyways Bonanza Megaways 2 is certainly as fun as it ever was. In some ways, more so, largely due to the magic of cascades. Cascades brighten the base game but are even sweeter when hitting a flow of them in free spins before multipliers get a chance to kick in. On the payout front, doubling the number of reels hasn't quite resulted in doubling the potential. However, Candyways Bonanza Megaways 2's 30,000x the bet is far from being gulping down an ear wax flavoured Bertie Bott's Every Flavour Bean.

Part of the appeal of the original Candyways Bonanza Megaways was the way it condensed the fun of Megaways onto 3 reels rather than the usual 6, creating quite a unique experience. As such, it's up for debate whether the shift back to a familiar Megaways setting for the sequel will lose fans or gain them. The increased winning potential and multi-choice free spins go a long way to overcome any shortcomings, making Candyways Bonanza Megaways 2 just as satisfying, if not more so than the original.

If you’re looking for a feel-good slot that will suffice for killing a few minutes at a time, you can do a lot worse than this game. 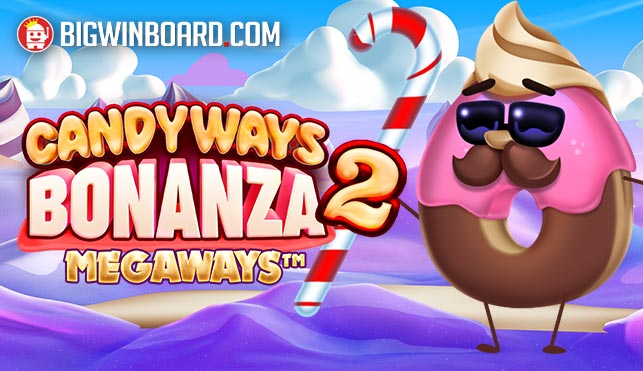