If you haven't been following Kalamba Games, you might not be aware of their original Caribbean Anne (2019) slot. This pirate-themed game was, in Kalamba's own words, a 'smash hit', which explains why the piratess is back for a follow-up. As is traditional in a sequel, most stats have been driven upwards, features tinkered with, and familiar faces have returned. In a positive step, Kalamba has axed the bizarre HyperBet system found in the first game to focus on a couple of respin/free spin features and a HyperBet bonus buy where permitted.

Things have brightened up for the sequel. The first Caribbean Anne game was rather grim, full of rough seas, Kraken tentacles, and the like. Caribbean Anne 2 looks like Anne has found a pretty sweet hideaway to bury treasure or lay low from privateer hunters. In the base game, the sunny background art, a big skull cave type thing, and the lush tropical flora gives the game a laid-back Caribbean feel. That peak rising up in the middle of the screen would suggest somewhere like St Lucia. When free spins trigger, the action moves inside a candlelit ship laden with riches, as a full moon beams in through the back window, and the soundtrack changes to a dramatic pirate score. The background art is good in both phases, and the female swashbuckler angle's pretty neat. 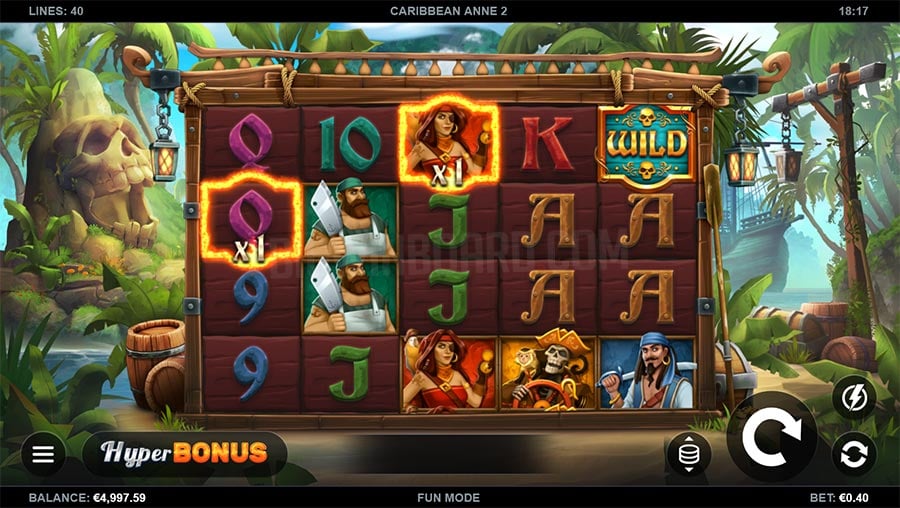 Arguably, one of Caribbean Anne 2's main improvements is the simplification of bet selection. The original used a four-tier HyperBet system which increased the wild multiplier values the more you were willing to pay. What made it grotesque, though, was how drastically the RTP varied. On the highest HyperBet level, RTP was a solid 97.03%, yet the bet increased by 5.4x. If you chose to bet at the regular HyperBet 1 level, then RTP dropped to a measly 93.52%. Yeah, kind of a mess.

The good news for Anne fans is there's none of that arm twisting going on in Caribbean Anne 2, where bets produce the same return value, from 40 p/c to £/€80 per spin. No matter the stake, the RTP is a sunny 96.71% when playing naturally, or 96.9% to 97.16% if buying the feature. The game is played on a 5x4 sized grid, using 40 fixed paylines, where hit frequency tips the scales at 17%. A highly volatile game, Kalamba rates as 10/10, while also packing impressive potential.

Players score a hit when at least three matching symbols land adjacently across a payline from the leftmost reel. There are ten pay symbols used throughout - six are low-value 9-A card ranks, leaving four higher value premiums depicting different pirate characters. Landing five premiums in a combination results in a payout worth 0.75 to 1 time the stake. Fortunately, there are multipliers to tart up those values.

While simplifying the stake situation, Caribbean Anne 2 tones down the rules as well. It is Kalamba, though, so expect a few 'huh?' moments as you square the paytable away with what's happening on the reels. However, there's nothing too drastic where we find Locking Wild Respins, free spins, and the HyperBonus.

There is a special Anne symbol, which, when it hits, leaves a Wild Frame around the position it landed in, displaying an x1 multiplier. If another special Anne symbol lands in a frame on a following spin, the multipliers in all frames in view increase by +1, up to a maximum of x30.

There is also a special cannon symbol. When one of these symbols lands in the base game, 1 x Locking Wild Respin is awarded where all framed positions turn into wild multipliers. Once the respin is complete and wins paid, all frames are cleared from the reels for the next paid spin.

Caribbean Anne 2 sticks to the spirit of the original while changing a few bits to make it an overall better game. The goal is still to build up as many Wild Frames as possible in the base or bonus game to get some multiplier action going. You'll freaking need it, too, because let's say you filled the grid with the highest paying symbol without any modifiers. Technically, the reward for doing so is a meagre 40x the bet. Fortunately, Wild Frames did produce the odd multiplier, and Caribbean Anne 2 is more sophisticated than the first in the way the cannon symbol triggers respins. In the first one, every ten spins, the frames accrued in that time would be converted into wilds. Then the process would repeat.

It's nice to see Caribbean Anne 2 doesn't hold players in the same level of contempt the first one did. Why it penalised users who only wanted to play at the default HyperBet Level 1, with its atrocious return value, is mind-blowing. Any game which has a return value of 93.52%, unless engaging a feature to bump it up to acceptable levels, increasing the base bet by up to 440%, isn't really your friend. Since you had to wait 10 spins to fill frames with wilds, the increased cost could quickly take its toll on your balance and nerves. Caribbean Ann 1's stats were clearly stated in the paytable, but it was like that hollow feeling you get when opening a big bag of potato chips to find a few broken up bits taking up around a quarter of the packet. Ah well, that's been wiped for Caribbean Anne 2. Another positive aspect for keyboard treasure hunters is an enticing 14,100x the bet max win figure.

In summation, Caribbean Anne 2 is an okay pirate game. It's got a nice LeChuck's Revenge look, a chilled reggae backing track, and the features can perform, though they do have a hint of the Kalamba fiddliness about them. Caribbean Anne 2 is an improvement over the original, though that isn't saying a whole lot considering how much the first one seemed to disdain regular gamblers.

Visuals and features have been refined for a sequel that holds players in less contempt than the original did, making Caribbean Anne 2 a highly playable game.