While the Rich Wilde franchise gets a reboot from his daughter in Cat Wilde and the Doom of Dead, much else remains the same in this ‘Book of’ style slot.

Cat Wilde and the Doom of Dead: Overview

Rich Wilde, the debonair scholar gentleman, is back in this… Hold up, wait a minute. Scratch that. Doom of Dead stars his daughter Cat Wilde who takes centre stage in another ‘Book of’ styled slot from developer Play'n GO.

Will we ever reach the stage when every pair of words in the English language has been wrapped around 'of' to name a slot? Perhaps, but that day is still a long way off, as is the seemingly insatiable appetite for this style of gameplay. If you’ve played one, then the chances are excellent you will know what to expect. However, the lead character change is new, is anything else?

Well the theme is not, so prepare for another journey to Ancient Egypt in a 5-reel, 10 payline slot. Your eyes get to feast on temples, pillars, snakes, and deities, all done to the typically high Play'n GO standard. The expanding wild's, in particular, are eerily well-drawn. Set within an ancient Egyptian burial chamber, the recognition factor is high if you've played other slots in the same genre. The visuals are crisp and the animations superbly designed.

Playable from the usual Play'n GO range of 10 p/c to £/€100 per spin, players are sent off to explore with the boisterous Cat Wilde. Those who appreciate high volatility will be stoked with the game’s 10 out of 10 rating, which is as volatile as you could possibly want. Default RTP is good on 96.29%, but can be lower depending on where you play. For example, it is possible to find Book of Dead wallowing in the mid to low 90s, so be sure to have a look at the paytable before launching.

Complementing the dusty background is a host of Egyptian themed symbols. Well, maybe not so much the 10-A low pays, though a touch of styling helps them fit in with the bunch. The rest are the premiums, consisting of scarabs, Anubis, a Sphinx, and our heroine Cat Wilde. ‘Book of’ slots usually offer pretty good symbol values, and Doom of Dead is no exception. For example, five premiums vary in reward from 7.5x for the humble scarabs up to 100x for the tenacious Cat.

On a slightly unusual note, the game comes with a standalone wild, as well as a scatter. Whenever the standard 1x1 wild lands, it expands into a full reel wild displaying an Egyptian god. Wilds substitute for any other pay symbols and are worth 100 times the stake for a line of five.

Cat Wilde and the Doom of Dead: Features

As well as expanding wilds, temple raiders have the fabled ‘Book of’ free spins game to look forward to. This legendary feature is triggered when 3 compass scatters land on reels 1, 3, and 5 at the same time. 10 free spins are awarded, but before they begin, one regular symbol from the low or high end of the paytable is randomly selected to become the special expanding symbol.

When possible for the special symbol to create a winning combination, they expand to cover full reels. The special expanded symbols pay from anywhere – they do not have to be adjacent. So should you land them on reels 1, 3, and 5, as an example, they will pay out as if they landed on the first three reels. The best-case scenario is a landing five wilds, or five expanded Cat Wilde symbols, for the game’s max single spin payout.

Scatters continue to turn up during free spins, so the feature can technically be retriggered without limit - though Play ‘n GO has built-in a win cap, should that happen.

Cat Wilde and the Doom of Dead: Verdict

It’s been a while since Rich Wilde first burst onto the scene, and he has been running strong ever since. The series has sent him to all manner of far-flung destinations and now sees his daughter take over the family business.

So how did she do? Not too bad at all, though copying a guaranteed winning formula has certainly helped her chances. For a first solo outing, a 'Book of' copy is a fairly safe bet, so it would be nice to see Cat branch out if Play n’ GO choose to use her again in the future.

Fans of this style will be pleased to know that despite a switch-up in characters, the gameplay and potential remain bang on point. You might think after all these years of looting Ancient Egyptian tombs there wouldn’t be much left, but Cat’s clearly got other ideas.

Actually, it didn’t take long for the vivacious Cat to splinter off from her dad. It only feels like yesterday the dynamic father/daughter archaeologist combo were doing their thing exploring watery ruins in Rich Wilde and the the Shield of Athena. Perhaps Cat felt pressured to step out from her famous father’s shadow and prove her worth?

Well, her solo debut is worth a fair bit, with potential capped at 5,000 times the stake which came in once every 1 billion spins during Play'n GO's simulation of the game. One thing to bear in mind is that due to the somewhat limited symbol values, it isn’t possible to land 5,000x on a single spin as you can in other ‘Book of’ slots. As always, it’s the bonus round supplying the opportunity for magic to flourish. This time it’s not just from expanding special symbols, but from full reel wilds adding more opportunities to win.

At the end of the day what can you say? Cat Wilde and the Doom of Dead is another attractive and highly entertaining ‘Book of’ style slot. Will the community ever have their fill of these? Maybe, but it’s impossible to see Cat sealing the lid on them. 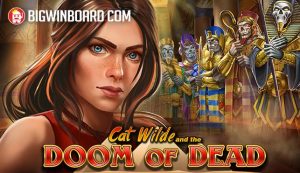 Game title: Cat Wilde and the Doom of Dead

Idk not really feeling it with this one. They should just have done a Book of Dead 2: The Legacy with this one and slapped on 10,000x instead of 5,000x.

You could literally just play shield of athena then? https://www.bigwinboard.com/rich-wilde-and-the-shield-of-athena-playn-go-slot-review

When a company is releasing a game every week, all year long, you know they’re just recycling the maths. Out of 52 games, my guess is it’s just the same 3-4 math models being used with some minor tweaks. Don’t really know what Im talking about, but that’s my gut feeling.