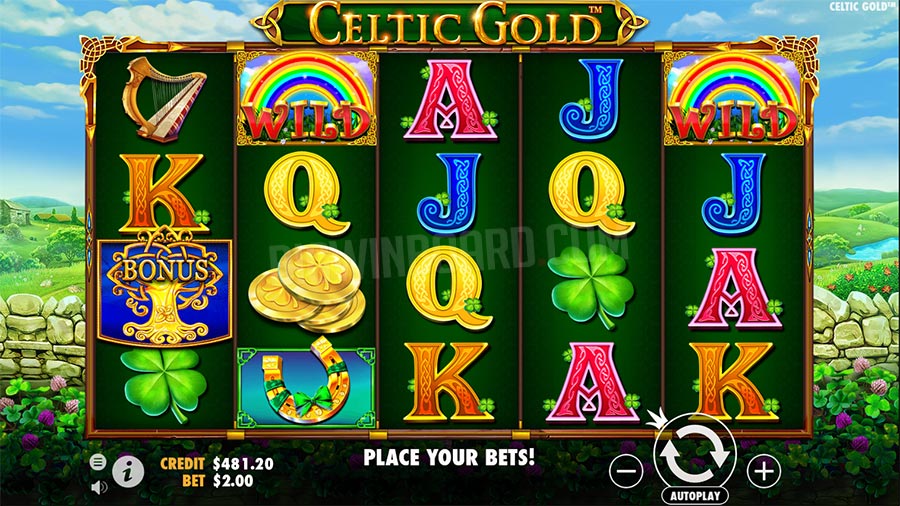 One of our most popular casinos
Exclusive slot games

Though we're happy to get a break from all the Asian-themed Pragmatic slots that we've had to review lately (5 Lions Gold, Caishen's Cash & Monkey Warrior), the thought of taking on another one of those Irish folklore slots didn't exactly feel all that exciting either. For a game to stand out these days, innovation needs to go into every area possible. Right from the bat, we could tell Celtic Gold is not one such creation. Disregarding our preconceptions, however, we kept spinning the reels in hope to come across a golden nugget at the rainbow's end.

There's never a rainy day in the land of the celts, which is no less true in this 5-reel, 50-payline slot powered by Pragmatic Play. The focal points here include the two free spin features that come with sticky wilds and raining wilds. You can also pocket up to 500 times your stake in the bonus picker feature. Celtic Gold is available on all devices from 50 cents to 250€ per spin, which might make it unsuitable for some low-rollers. The default 96.53% RTP follows industry standard, but there's also a 94% version so better check before playing.

Visually, it's typical of the genre but well crafted. In the backdrop you'll see rolling hills, lush green grass, blue skies, and pretty much everything else you'd come to expect of an Irish-themed slot. Though a bit cheesy, the complimentary traditional soundtrack is actually quite good, especially if you leave the game on idle for a while - although that could just be our bad taste in music. Symbols on the reels include Celtic-style A, Q, K and J royal values as well as lucky clovers, gold coins, harps and horseshoes. Most rewarding is the pot of gold, giving you 6 times your stake for 5 of a kind. Better yet is the wild rainbow which appears fully stacked on all reels - 5 on a payline will give you 8 times your stake.

If the bonus scatter appears on reels 1, 3 and 5 simultaneously, the Bonus feature comes into play. Given the option to pick 1 of 3 pots, these are the rewards on offer:

Good things come to those who wait, they say, but waiting for a free spin feature to turn up here can be quite a rough ride. The thing is, even in the lucky case you do land 3 bonus scatters, the chance of picking one of the two free spin features is not all that great it seems, and as you can imagine, this is something that can get quite discouraging real quick. Sure, the cash prizes can be half-decent, but it's hard not to be disappointed as the highlight of any slot comes down to triggering a free spin feature.

In terms of potential, Celtic Gold is a medium variance slot with relatively low payouts. In the free spins, you'd be lucky to walk away with a total win of 100 times your stake, although, in theory at least, you should be able to land a full screen of wilds, in which case you would pocket 400 times your stake. The biggest single payout will otherwise come from the High Award cash prize where you can win up to 500 times your stake.

We're not exactly sure why Pragmatic Play felt Celtic Gold had to be made. It's unimaginative and tedious, and we found most ideas were implemented poorly, turning the slot into a frustrating and aimless slog.