✅ Play Clash of Camelot on

One of the more enduring legends passed down since the days of yore, and a Play'n GO go-to slot theme, is that of King Arthur. No doubt many are familiar with the stories or at least the name King Arthur, but interestingly, to this day, after centuries of debate, historians are unable to confirm whether the man was actually real. Perhaps the question mark over King Arthur's very existence has helped fuel the mystery. At this point, it wouldn't really change much if scholars could prove he was real or not. At least, from a gambling perspective, where the legend is alive and kicking, in part thanks to online slots such as Clash of Camelot.

Clash of Camelot is not Play'n GO's first dalliance with the Arthurian Legends. So numerous are Play'n GO's collection of Arthur slots that they are starting to take on mysteries of their own, the origin story getting murkier as time passes by. Suffice it to say, Arthur, Merlin, and the lads are popular down at the Play'n GO offices, and Clash of Camelot is another addition to the collection which includes titles such as Diamonds of the Realm and The Green Knight. Clash of Camelot starts in a fairly inspiring spot. The base game takes place at night in a rocky gorge as trees, hills, mountains, and Camelot can be seen off in the distance. Triggering free spins moves the action to a more romantic location lit with golden light and bordered by numerous waterfalls, like a fjord after a heavy downpour.

Clash of Camelot is available for play on any device and takes bets of 10 p/c to £/€100 per spin. Going off the stats, Clash of Camelot is actually a rather beastly game, a wounded one at that, with a very highly volatile math model (10 out of 10), and masses of potential, on paper at least. It comes in a variety of RTP models, and checking the game rules should let players know if they have the highest 96.28% model or one of the lower-value versions.

Played on a 5-reel, 3-row grid, Clash of Camelot supplies 10 paylines for hitting winning combos on. The symbols used include T, J, Q, K, and A as the low pays, then chalices, amulets, rings, and necklaces as the high pays. Hitting a five-of-a-kind winning line pays 2-4x the bet for the lows or 7.5 to 25 times the stake for the highs. A cross swords emblem is the game's regular wild symbol which substitutes for all normal paying symbols. Wilds appear on all reels and pay up to 100x the bet for a five-of-a-kind line.

It probably shouldn't be a huge surprise to see a slot that has such well-used subject matter as King Arthur declines to dazzle with masses of gaming ingenuity. Clash of Camelot keeps things relatively simple, though effective, with helpings of Multiplier Wilds, full reel wilds, and free spins.

Arthur and Mordred wild symbols can land on reels 1 or 5 on any spin. When both types land on the same row, the free spins feature is awarded.

For those who found Game of Thrones' romance between Jaime and Cersei to be edgy stuff, or kinda gross, the Arthurian tales may have actually beat them to the punch many centuries earlier. According to some sources, Mordred was the son of Arthur and a half-sister, and his anger stemmed from the King's attitude towards their relationship. It really depends on what you read, though, as the interpretations seem to offer varying explanations of who did what and why. As can be the case when a grudge is borne for so long, how it came about starts to fade into a distant memory.

However it came to be, Clash of Camelot keeps the grudge between Arthur and Mordred ticking along. This can be to players' benefit, it must be said, because the two rivals squaring off may well lead to good things. It starts when both character wilds land on the same row, triggering the bonus round. Once in, and you've picked which bonus parameters suit best, the two characters landing on both outer reels to start battling is where the game gets a chance to really shine. Technically, Clash of Camelot has the ability to bring together a substantial wild/multiplier combination. Here's an example, a line of five x100 Multiplier Wilds on its own is worth 10,000x the bet, lending legitimacy to Clash of Camelot's max win figure of 35,000 times the stake.

Clash of Camelot probably won't end up on a short list for innovative slot of the year, but that sort of misses the point. The game seems more concerned with keeping things simple, not cluttering the board with knotty gaming. Instead, it uses the competition between the two rivals as a backdrop for dumping in a hefty stack of wilds and multipliers - when the going's good.

Clash of Camelot serves up simple, sturdy gaming for players who want to leap into the fray without having to faff around with complicated rules. 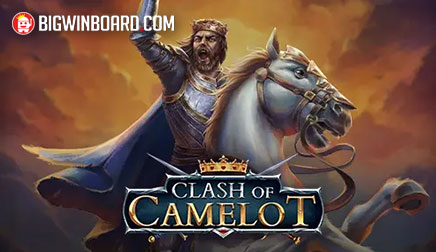